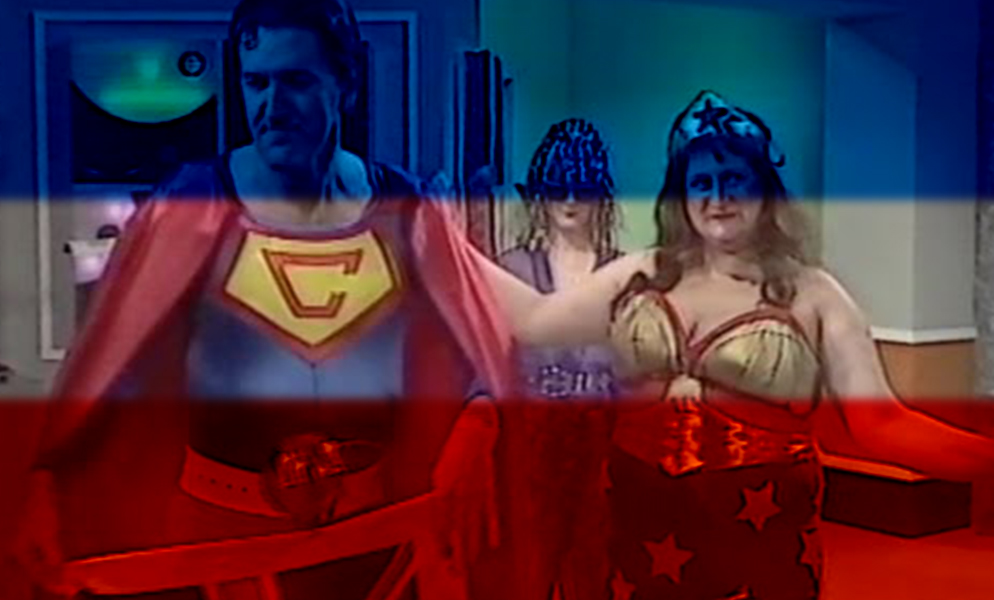 The eventual victor in the TV Times Magazine Top Ten Awards in the category of comedy was Russ Abbot. The loss in 1983 from his Madhouse gang of Michael Barrymore had little, or no impact on Abbot’s personal popularity, nor of that of his programme. Accompanied by Bella Emberg, Dustin Gee and Les Dennis, the funnyman embarked upon a nationwide tour in the autumn of 1983. Described in the programme as “one of the funniest men in Britain and certainly one of the hottest properties in entertainment,” Abbot would himself later concede “the 80s were very good to me”. “In just a handful of years, he has emerged as a brilliant talent,” gushed the programme notes, “a fine comedy actor and one of a brand new breed of comedians who are taking British showbusiness by storm. He has been acclaimed by the public as The Funniest Man on Television … and feted by showbusiness peers with the prestigious awards of Showbusiness Personality of the Year, from the Grand Order of Water Rats, the highly renowned charity organisation, and ITV Personality of the Year from the Variety Club of Great Britain.”

Having picked up the show from Freddie Starr, Russ Abbot’s Madhouse was a revelation. “If the star’s previous form is anything to go by, it should stand a good chance of winning plenty of laughs,” wrote TV Times as it previewed Russ’ first series in charge. “Viewers of Freddie Starr’s Variety Madhouse will remember lanky Russ in the guise of ‘Cooperman’ … David Bell, controller of entertainment at London Weekend Television, described the show as ‘a fictional situation comedy, without a plot, that takes place in a madhouse next door to a chip shop.’”

“Everybody was involved,” says Abbot. “If anybody had an idea which we thought we could use and make work then we would … (It) all stemmed from ideas on the rehearsal floor. Each show took about a week to record … you’d start on a Monday with a read through but that had changed by Monday afternoon. Changed by Tuesday morning and as long as we got it right by the tech run on the Thursday before we went into the studio it was great. But even then on the studio floor it changed with improvisation. But it was a great vehicle.” Intrinsic to the success of the Madhouse was Russ’ entourage, and from day one new stars were expected to emerge from the firmament. Michael Barrymore would be first to fly the coop, but back in 1980, the smart money was elsewhere: “Newcomer Dustin Gee looks like being to Russ Abbot’s Madhouse on Saturday, what Russ Abbot was toFreddie Starr’s Variety Madhouse. Gee is an anarchist impressionist, his favourite characters being John Cleese and Bamber Gascoigne. He says: ‘I don’t do a lot of research on my impressions. My method is just to believe completely that I am the person I am imitating. I only do people I like – which means I don’t do politicians.’”

By 1983 Russ Abbot’s Madhouse was regularly attaining audiences of 12 million. Abbot declared in 2001, “it was a hell of a bill … it was a great shop window … I think it would still run today”. While viewed as chaotic and dangerous, unlike most anarchic comedy of the time Russ Abbot’s Madhouse was, in fact, completely safe. Consisting entirely of sketches, the show’s regular characters sought not to reflect or comment upon modern society. Instead it took inspiration primarily from the well of popular fiction: Boggles was a spoof on the stiff upper lip RAF pilots of wartime fiction, while Cooperman was an attempt at a parody of the superhero genre. Other well-loved creations included Barratt Holmes, Fritz Crackers and most memorably, Jimmy McJimmy (or CU Jimmy as he later became known) The fast pace of the sketches meant that many of the characters were reduced to simple, repeatable, memorable catchphrases, and Abbot’s most popular creations found their way into schoolyard vernacular, securing the star’s, quite unique, cross-generational appeal.

“The characters grew,” says Abbot, “and the comedy came from within them because they became personas in themselves … Wilf Bumworthy was the chairman of the South Burnley Pigeon Fanciers club and people could relate to these characters. I don’t know how they related to Jimmy or to Cooperman, but then if you look at the film Superman: The Movie, Cooperman was a spoof on that. Basildon Bond was a spoof on the James Bond movies – so there was always a relation there. People could always relate to who these characters were … and we had mail … there were all sorts of letters even from the younger generation with pictures and cartoons of the characters drawn on the letter heading. Because that kind of programme – and Saturday nights – appealed right across the board to all ages – from eight to 80. So it was never geared at one particular audience or one particular avenue. It was there to please everybody.”

Critical reaction was far from positive, with Abbot’s popularity rankling with many who preferred their comedy a little more cutting, and for a time Abbot was held up as the epitome of everything wrong with comedy. In 1980 Miss M Jakeman complained: “Do those concerned with Russ Abbot’s Madhouse ever stop to consider how cruel their Hunchback of Notre Dame parody can be to those people who have to bear the affliction in real life? I know humour has to have a target, but this is like baiting an animal.”

Regardless, the plaudits kept coming and over the next few years Abbot would be voted top variety act in the 1990 British Comedy Awards, comedian of the decade, funniest man on the television in Europe, the funniest man on television in Britain (five times). Yet, in 1985 he would be forced to leave the station that had nurtured him. Intent on winning the Saturday evening ratings war, LWT was focussing on game shows to the financial detriment of all other types of programming. When Stanley Baxter left the company to return to the BBC in May that year, he commented, “[LWT] looked at the budget for the series I had already started to write and decided they could not afford it”. As David Docherty reports in his book on LWT Running The Show “two weeks later, Russ Abbot, whom LWT had nurtured into a major star, but who required the kind of resources which Baxter sought, also moved to the BBC. When the Baxter switch was announced to the press, Jim Moir, BBC’s head of variety, light entertainment group, sniffily commented ‘London Weekend seems to be investing most of their money in game shows. We are investing in people’”.