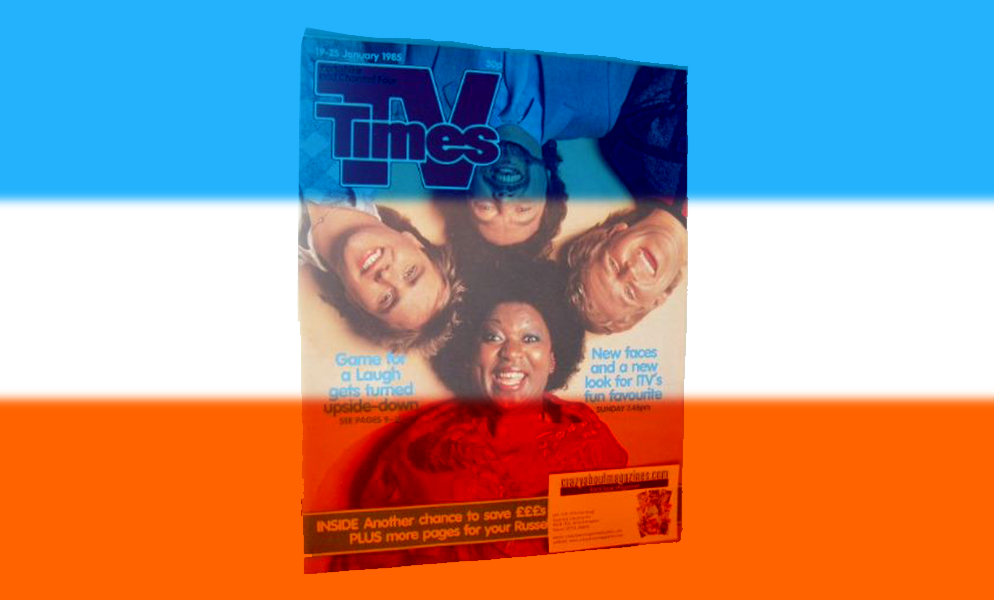 “The nation talked about it,” says Boyd of Game For A Laugh. “’Did you see that daft story?’” “We did three series, then Matthew declared he had had enough,” remembers Beadle. Sarah Kennedy recalls she and Matthew went out for lunch, and over a plate of spaghetti decided it was time to go. “I don’t think Alan Boyd has ever spoken to me since,” she says. “He cut me dead once, but it was time to move on.” Beadle rationalised their decision as follows: “By this time (Matthew) and Sarah had developed a very close double act, with Sarah playing Miss Prissy and Matthew, in his camp way, being the naughty little boy, so Matthew’s departure made Sarah question whether her role would be the same. Furthermore it was a problem to define Henry’s role in their absence”.

The author of Arrow Publication’s 1982 Game For A Laugh book, Brian Wesley, was assigned as the show’s new producer. He started to play around with the format. “It was there for all to see, it changed,” says Kennedy. “I think it’s very difficult to – how shall I put it? – be the second wife or the second husband.” Meanwhile, the importance of the show was becoming apparent to the upper echelons at LWT. Beadle was featured prominently in the station’s 1983 publicity campaign – “the Entertainers”, and the programme’s ability to generate ratings was coming under the scrutiny of programme controller, John Birt. His predecessor, Michael Grade, had positioned Game For A Laugh right at the heart of the Saturday night schedule, but Birt saw an opportunity to use the show to address a weakness in ITV’s Sunday night schedule. Suddenly everyone wanted to tinker with a hit.

Beadle, ever protective of what he saw as his “baby” grew exasperated as the show moved further and further away from his original vision. The replacements for the two Kellys and Kennedy were unable to recreate the same formula and the audience’s affection suffered. Of the new team, Debbie Rix, drafted in as a deliberate attempt to reconstitute Kennedy’s school matronly charms, and Lee Peck, a “hipper” version of Henry Kelly, had very little impact. Martin Daniels’ two series with the programme were more successful, with the son of the famous magician able to craft himself a decent television career off the back of this exposure.

The press launch for the first series to feature the new line up was held at the Dorchester Hotel in London. For Daniels, it was a baptism of fire. “I felt like the President of the United States,” he says. “There were all of these reporters sitting in rows and we were paraded onto a stage and they fired questions at us. One of the first ones for me was, ‘Have you got this job because you’re Paul Daniels’ son?’. Alan Boyd stood up and said, ‘No. We picked him because we think he can do it.’ So I felt vindicated.” Conversely, Game For A Laugh signalled the death knell for Rusty Lee’s television career. Unfortunately, she was not a skilled enough presenter to be able to deal with the demands of a show as complicated as Game For A Laugh.

All of these deficiencies weighed heavily on Beadle. “We were in rehearsals one day,” he recalls, “and I was becoming more and more upset. I was decidedly grumpy as I strode about, saying, ‘This isn’t going to work. This isn’t going to work. It’s all wrong.’ It wasn’t even my routine and in the end, Brian (Wesley) got fed up with me and snapped. ‘Look I’m producing this show and you aren’t … ’ Although all the crew were around, out of sheer frustration I screamed back at him, ‘You are fucking killing the Golden Goose. You are killing this show. You’re not listening to the public. You’re not treating it right,’ I really let rip and then stormed out. I’d had it”.

Birt’s decision to move the programme to Sunday nights looked at first to be an inspired move and a welcome chance for the show to regroup. On 20 January 1985, the final series of Game For A Laugh began, and the switch to Sundays brought an immediate increase in viewers, numbers rising from 11 to 14 million. However, the programme was running out of steam, and at its time of weakness it had been brought in front of an altogether more discerning viewer, conditioned to expect television of a more substantial nature (such as LWT’s own The South Bank Show).

Boyd complained bitterly. “I said Sunday night is not the night for this type of show and John Birt wasn’t listening. You make a different type of show for Sunday. That was a piece of bad scheduling. I don’t think it was malicious, it was just wrong. We still have a culture that Sunday is The Antiques Roadshow and gentler programmes, whereas Saturday night is funnier and edgier. You don’t put a show like Game for a Laugh on a Sunday night. You just don’t do it. They did it. They killed it.”

The press was ever more vitriolic. The Daily Star claimed the programme had sunk to “even murkier depths. New presenter, Martin Daniels, screwing himself up to do his masters’ dreadful bidding, was required to ask a young girl from the audience to place star stickers on the parts of a man’s body beginning with the letter B. The man with the body (in a little yellow costume) twitched his muscles and hid his face while Martin goaded and badgered the girl with cries of: ‘You must be able to think of a couple of things!’ … This degrading spectacle … must make Game For A Laugh the most grotesque TV show of all time”. Audiences fell away and the programme was cancelled. Beadle conceded it “had probably run its course,” while Alan Boyd blamed Birt’s decision on the move away from Saturday early evening. Birt in turn accepted this had been a strong contributory factor (it was difficult for him not to, as Boyd’s sentiments were echoed very vocally by the other ITV controllers), but also pointed the finger at changes to the production team and presenters.

In truth, all of these factors contributed, as did the simple fact that such a programme could only remain innovative and original for so long. Game For A Laugh was the first in a long line of Saturday night shows that initially delight, but ultimately repel, their fickle audience. “We had run out of the mad people,” believes Boyd. “The people that walked horses backwards, or the people that raced cars backwards. We’d eaten all these. We had done enough twin switches and silly things and potters wheels and mouse in the boxes. You get to the point where you’ve lost, not the creativity, but that inventiveness.”

“Game For A Laugh proved to be a hole in one,” reflects Beadle. “One of those shows that revolutionised a pattern of British television viewing. I think that when the history books come to tell the story of British TV, it will be recognised as a show that changed the public’s viewing habits. It helped ITV finally emerge victorious in the weekend ratings battle, out-gunning the BBC in the prized Saturday evening slot”. Beadle would do much in the wake of, and because of, Game For A Laugh, but the programme’s single greatest legacy would live on through Alan Boyd. As Game For A Laugh was going through its death throes, the talented producer was taking all he had learned from the experience and applying it across LWT’s schedules in a manner that would ensure that Saturday night television would remain altered irrevocably.

Next: “People love us to be sexy”