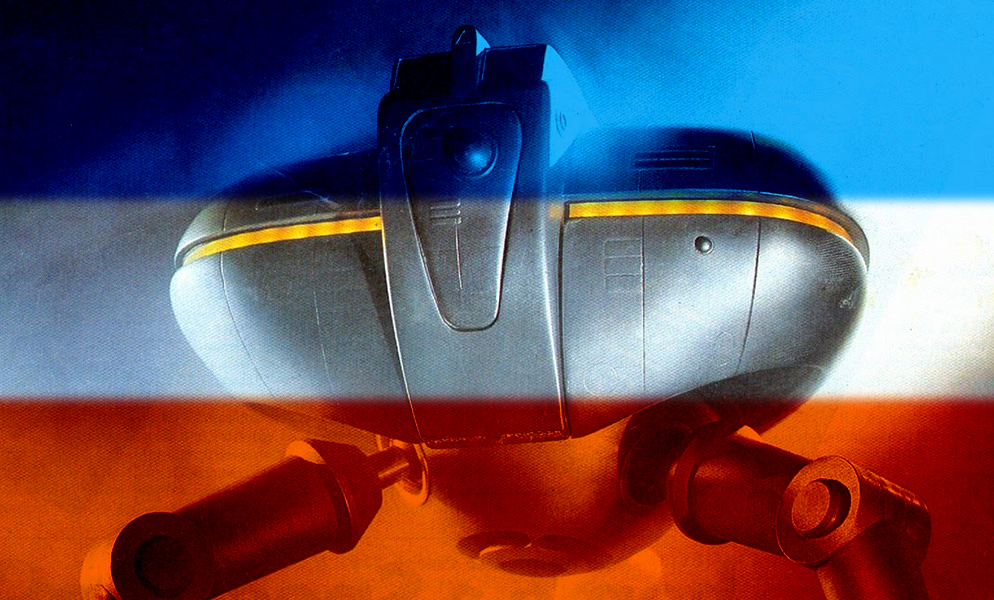 The Tripods first aired on 15 September 1984 accompanied by a level of hype that marked the series out for intense scrutiny right from the outset. Based on a trilogy of books written by John Christopher, itoffered up an intriguing recipe of science fiction, history and travelogue; ideal raw material for a television drama. “It’s an adventure story,” explained the author to the Radio Times. “For me it goes right back to my mother reading me to sleep at night with Swiss Family Robinson,and things like Coral Island which I read later.” The first television option on this “adventure series” had been taken up not long after the publication of the first book – ‘The White Mountains’ – in 1967. That first failed attempt had involved producer Richard Bates. It was an indication of the man’s determination that he was to be at helm when the drama eventually made it to our screens 17 years later.

“Other producers had tried to get the series off the ground in the meantime but none had succeeded,” recalls Bates. “I went first of all to Southern Television who had a strong children’s department under Lewis Rudd. Lewis commissioned the early scripts, assisted with the preparation of the budget and finally gave approval for production. But – horror of horrors – three months later Southern lost their licence! I had to start again.

“By this time I was at the BBC preparing a series I had developed with Lavinia Warner called Tenko. But I left this in order to set up another series I had developed called One by One only to leave this shortly afterwards at David Reid’s request to make The Tripods. You will recall that Doctor Who came to an end in the early 80s [sic] and the department was looking for a new sci-fi series to take the Saturday afternoon slot. So I was sitting in the right place at the right time!”

The BBC’s decision to pitch The Tripods into what was still considered by many as the “Doctor Who slot”, ensured that comparisons were to be made between the long-running science fiction series and the BBC’s new, much publicised production. More significantly though, regardless of John Christopher’s assertions to the contrary, the series would come to be considered an out-and-out science fiction drama. This misconception was not helped by the press (which predicted The Tripods “was the future of television science fiction and that it would be to the 80s what the now passé Daleks had been to the 60s,”) or by the cast. John Shackley (who played Will, one of The Tripod’s main characters) professed to be a long-time science fiction fan, describing with glee the original Star Wars trilogy as “nine hours of pure megablast”.

The Tripods, like Doctor Who before it, found itself up against a new big budget American action show on ITV. The A-Team had begun transmission the previous year and had been a substantial success both in America (where it had been the only major hit out of the 45 new shows created in the States that year) and in the UK. “We are not looking for Emmy nominations, but to get the blood pumping,” asserted the presidentof the NBC TV Entertainment Division, Brandon Tartikoff. “In that respect, The A-Team has exceeded my expectations.” The series’ popularity could be attributed (according to Tartikoff) to the “crazy times” in which we lived. “The A-Team are underdogs, outcasts of society at a time when there are a lot of depressed people – the unemployed and those who are experiencing a poor quality of life. The show is for them. It’s escapist – fun to watch”. “The show isn’t working just because we are flipping jeeps over,” added executive producer Stephen Cannell. “People are getting a kick out of the characters, who have specific attributes that make them funny”.

Meanwhile, the characters in The Tripods,were failing to entertain the British audience. Although reaching a series high of 9.5 million,the seriesaveraged out at a mildly disappointing 6 million viewers. This compared poorly with The A-Team, which at the time was at the height of its popularity and able to boast 16.6 million viewers. “The big mistake that the BBC made when they adapted the John Christopher trilogy was the over-ambitious length,” reflected critic John Molyneux in 1994 “quite simply there is not enough material in each of the books to make three series of 13 episodes”. “The department badly wanted a long-running serial and my brief was to adapt each book in 13 episodes,” concurs Bates. “Looking back now I think that was probably a mistake but we took up the challenge. Inevitably this meant expanding some incidents and indeed this did reduce the tempo of the series.”

Audience expectation too, seemed to work against the show. The pre-publicity ensured that (quite reasonably) viewers expected the series to centre on the nefarious activities of the Tripods. Yet the focus was on the coming of age of the central character, Will. This meant the Tripods were peripheral figures throughout the first series, with their occasional appearances shoehorned into the plot. While a second series was commissioned and broadcast, the arrival of Michael Grade as BBC1 controller in 1984 signalled the end for The Tripods. Not only was it failing to attract a significant audience, but it was proving to be extremely expensive to produce, with the below-the-line costs coming in far higher than budgeted. The Tripods was cancelled while in pre-production for the third and supposedly final series.

Next Monday: There’s lots of killing, but not much else