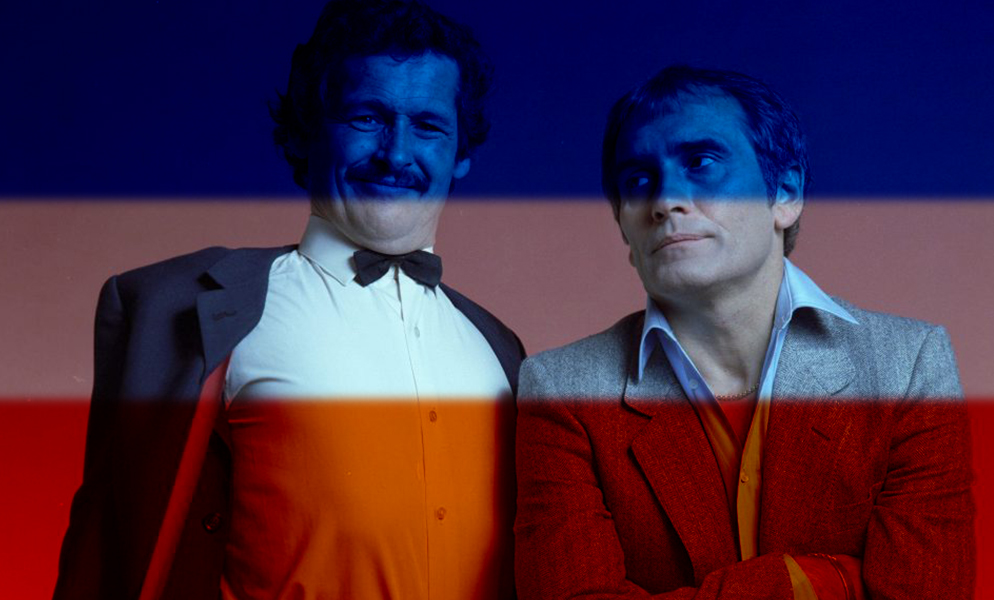 While 1983 saw Squire’s career briefly hit the stratosphere before descending back to Earth, Cannon and Ball’s star was still inexorably on the rise. 1982 had seen them pull in audiences of over 10 million for their fourth series for LWT, and take to the road for a solid nine months, earning the two comedians enough money to each purchase a Rolls Royce. When they weren’t performing they were making public appearances to appease their growing legion of fans. Following them around to gain an understanding of a typical day in the life, TV Times writer Linda Hawkins reported in 1982 “as the spotlight hits them, Cannon and Ball become different people. The mild, easy-going Tommy Cannon is suddenly irritable and impatient. The lively, quick-thinking Bobby Ball is transformed into a sort of manic imp, alternating pathos with aggression. The only time the masks slip is when something goes wrong … Cannon and Ball come off-stage to shouts of ‘More!’ Sweat rolling down their faces, they hurry through the autograph hunters to their dressing room to get ready to do it all over again.”

Just a few years on from Bruce Forsyth’s Big Night, the duo had become deeply entrenched into the entertainment industry. Their fifth series pulled in 12 million viewers and the twosome’s first (and only) feature film The Boys In Blue was shot. They had now worked with Little Richard, Englebert Humperdinck and Diana Dors; and could recall with some satisfaction that their show had provided much needed exposure to up and coming comedians including Lenny Henry, Bobby Davro, Dave Spikey and Brian Conley. Linda Hawkins again met with them at the end of the year. This time she observed a palpable change. “Cannon and Ball, recently voted the Variety Club showbusiness personalities of the year, are Britain’s most popular double act since Morecambe and Wise,” she noted. “This spring they set a record for the one-night variety acts by cramming 134 shows in 45 theatres into a 13-week tour. As we talk, they’ve just completed a similar autumn tour and are about to start work on their new TV series … so if they feel a little fatigued, no one can blame them.”

“Things have been going too fast for us,” Ball confessed. To Hawkins it was obvious the frenetic pace of the duo’s schedule as well as their reliance on each other could generate friction. “They’ve never forgotten the night long ago when another double act occupied the dressing-room next door, and they overheard the two men fighting. It’s never happened to Cannon and Ball, but they do have their arguments.” Still reeling from their sudden rise to success, the duo seemed – in 1983 – to be unable, or unwilling, to reveal just how difficult and tense their relationship had actually become. It wasn’t until 17 years later that Ball explained the full extent of the pressure they had been under.

“Our own career was now flourishing to the point of insanity,” he recalls, “but at a time when Tommy and I should been at our happiest, we weren’t. We had everything – a great career, big houses, personal assistants, and no money worries … One day Tommy was bored and went straight out and bought a boat. Sadly though, despite all we had, we didn’t have each other. Our friendship had started to deteriorate.”

“I think it was mainly pressure more than anything else,” says Cannon. “…The movie [The Boys in Blue] wasn’t good, and there were times when, you thought to yourself, ‘I don’t know how we’re getting through this movie,’ but we were professional enough to make sure it didn’t cut across our work. But a double act is a give and take situation, you have to allow the comic to do his bit, he has to allow you to do your bit and you’re being managed by people pushing you, shoving you in different directions up and down the ladders, until eventually it gets too much. We ended up blaming one another.”

Cannon grew closer and closer to their manager, who was displacing his comic partner from the decision-making process. He would make career suggestions to Ball, only to have the manager, coincidentally make the same suggestions just a day later. Things grew worse, and on one occasion the manager advised Ball “Tommy and I will do the business, you just go into a field and meditate”. Suspicion grew within the industry that the duo were no longer speaking and the added burden of having to appear ever more united in public just added further pressure to a – by now – intolerable situation.

“It was a sorry state of affairs and we were so unhappy,” remembers Ball. “I frequently wondered why I stayed and didn’t just walk away. I looked at Tommy and sometimes I felt I had been used … Matters reached the point where we could no longer stand each other’s company and avoided meeting each other whenever possible. How the public didn’t discover this, I shall never know.” During this time, Ball gained a reputation for being unpleasant to work with. When recording their television series, he would verbally abuse the production team and on one occasion actually hit a fellow performer on stage who he felt was upstaging him during curtain calls. Cannon and Ball became the subject of increasingly salacious rumours and accusations.

“We were away from home once for 48 weeks out of the year,” says Cannon, “so you can understand that pressure … we learned a lot through that.” For the last five years Cannon and Ball had been blazing a trail through Saturday night television, allowing acts of a similar disposition to follow in their wake. To surmount the problems that faced them they needed to innovate once again. As before, what they would do next would come to be imitated by many similar styled performers shortly thereafter. By the end of 1983 Cannon and Ball were unknowingly gearing up to find religion.

Next Monday: 1984: All the anticipation of the great emotive moment