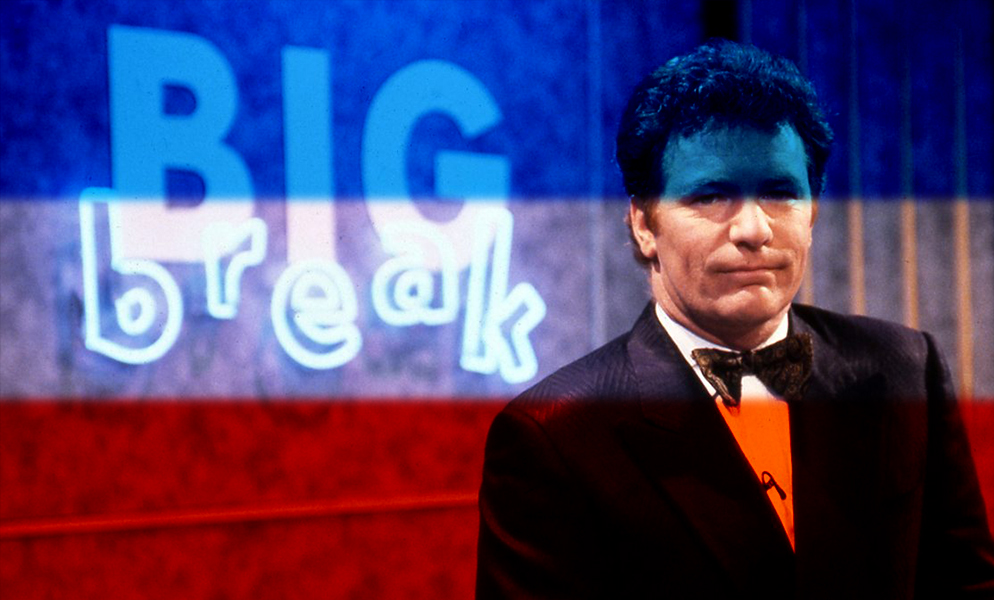 Since winning New Faces in 1976, Jim Davidson had been a constant staple of ITV’s light entertainment output. Almost immediately after his victory he’d signed a contract with Thames Television where, after appearances alongside William Franklyn, Barry Cryer, Bob Todd and others on What’s On Next?, he had graduated to his own series in 1979. Throughout the 1980s, he starred in sketch shows, variety specials and two sitcoms –Up The Elephant And Round The Castle and Home James. But come the 1990s, Davidson’s relationship with Thames had come to an end. After his final series for ITV, the adult-orientated Stand Up Jim Davidson in 1990, Jim accepted an offer from the BBC to relaunch his career as a game show host.

Game shows had made up a big part of the BBC’s entertainment output for many years, but the corporation often seemed to tolerate such programmes rather than encourage them. Shows like Every Second Counts and Bob’s Full House had been popular, but many critics asked what they were offered that couldn’t be supplied by ITV. The BBC faced a further game show shaped problem in that the licence fee prevented them from giving away huge prizes – something that Every Second Counts had got round by taking away the prizes that contestants had previously gained after they’d won the next, a quirk that confused almost everyone that watched. Against the more glamorous, expensive ITV opposition – witness The Price Is Right overloading its winners with cars, holidays and fitted kitchens, compared to Bob’s Full House’s carriage clocks and dried flowers, the BBC seemed a bit anaemic. Yet studio-based quiz shows were cost-effective (several could be filmed in one day), popular and an easy way to engage BBC-contracted celebs, hence their continued presence in the schedules. An inane, cheap BBC quiz, however, could get critics’ pens moving faster than virtually any other show. Not for nothing, then, did Jim Davidson open the first Big Break by announcing, “This is my first show for the BBC, and if this doesn’t work out, we’re both snookered!”

Big Break’s most obvious influence was the long-running ITV series Bullseye, where contestants had to exhibit both a general knowledge and some skill at darts to win big prizes, with guest professional players popping in to throw a few arrows and add a bit of credibility to proceedings. Despite, or perhaps because of, host Jim Bowen often appearing completely bewildered by everything that was going on around him, Bullseyehad become a huge hit. Much of the same was evident in Big Break– each week, three members of the public would be teamed up with professional snooker players. The punters would answer questions to win time for their team-mates to pot balls on the in-studio table. If they could do this successfully, cash sums and prizes would be on offer – but not very big ones. Davidson asked the questions, and bantered with the show’s “referee,” John Virgo, a professional player himself who’d garnered something of a reputation in the snooker world for his impressions of various players, and whose presence on the show clearly helped attract some big names (virtually every famous player appeared at least once during the run). Again, this was similar to Bullseye, where Jim had darts commentator Tony Green as his sidekick. And just at it did with Tony, Virgo’s role on Big Break expanded as time went on, regularly participating in daft sketches and routines.

With a loudmouth comedian in charge, a format based around a pub game, and a raucous stomp-a-long theme sung by Captain Sensible, Big Breakwas clearly not cerebral viewing. However, it was incredibly popular. The series debuted on Tuesday 30 April 1991, and was an instant success, pulling in 16.5 million viewers for its first episode, and not leaving the top 20 ratings for its entire run. A second series was duly commissioned, and began on Saturday evenings in January 1992, providing the BBC with another Saturday banker. If the show never lived up to the heights of its first run, it would go on to remain successful throughout the 1990s, still appearing on Saturday nights up until 2000.

Next Monday: The humour of Beadle comes through humiliating people