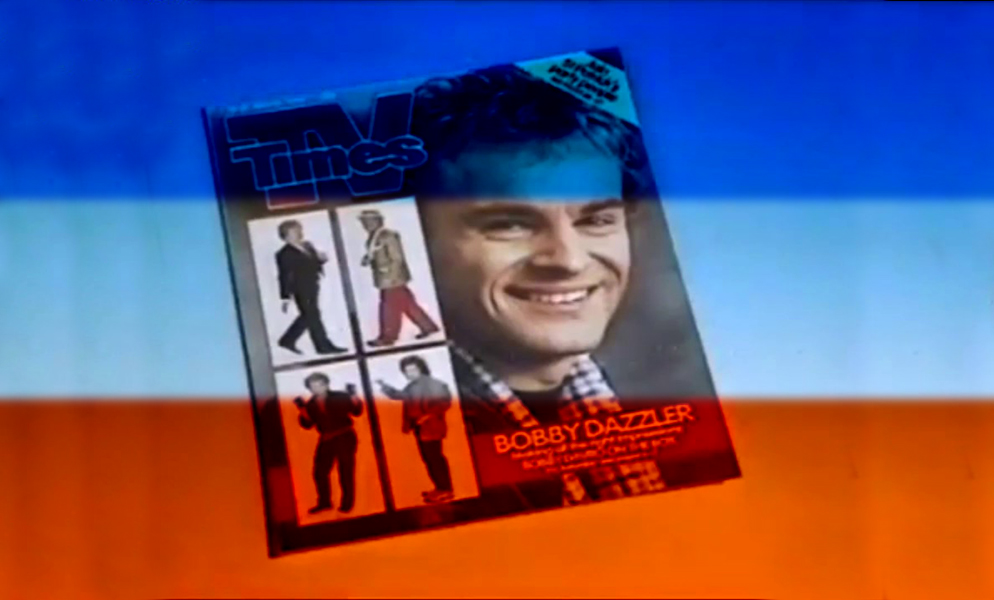 On Saturday 4 January 1986, ITV’s evening schedule included an oddity – 60 minutes of extreme alternative comedy in the shape of LWT’s The Best of Saturday Live. The incongruity of the broadcast was underlined by the fact that here – on the most mainstream TV night and on the most mainstream TV channel – at some time after 9.45pm the idle viewer could happen across The Style Council, earnestly working through a live rendition of one of their records.

If this special broadcast appeared to herald a revolution in comedy and light entertainment on ITV, it was to be a false dawn. 1986 would see the proliferation of a number of highly mainstream comedy acts across the ITV schedules, establishing deep roots in the foundations of the Saturday night television schedules.

LWT’s dependable duo, Cannon and Ball, were still going strong. By now onto their eighth series, their ratings had remained high (with an edition in 1984 attracting 13 million viewers). Having taken a break from television for much of 1985, there was great anticipation as to what the new show might bring. But during that period the duo had made a startling transition. Cannon and Ball knew their career relied on them staying together, but their personal relationship had deteriorated to a point where matters had become untenable.

“I think most double acts if they were honest and truthful would say there are times when it’s difficult,” says Tommy Cannon. “It’s a lot to do with respect, a lot to do with feelings – if you’ve been together long enough and you care about a person then you should know his feelings – if you say something that’s going to hurt you should know, and sometimes in our bad days you’d say something like that because you knew it were going to hurt him, because I knew him that well, like he knows me.”

“We were working at the Bradford Alhambra when a vicar called Max Wigley came into the theatre,” recalls Bobby Ball. “He welcomed us to the venue, introduced himself as the theatre’s official chaplain, and must have thought it strange that we were in two separate dressing rooms. A little later he knocked on my door, and for some reason I let him in. I wasn’t a great lover of vicars, and could do without religion, thank you. Max just sat and talked to me, however, and I was surprised that he didn’t push God in my face, only talking about his faith when I asked him to. His confidence in a God who loved his creation made me think about my life from a totally different angle.”

This encounter was to lead Bobby Ball towards a newfound faith. It also sewed the seeds for reconciliation between Ball and Cannon. Able to recognise the pain that each was enduring and inflicting upon the other, Cannon and Ball were able to set aside their differences and grow closer together over the remainder of 1985. So by the time their 1986 series was ready to go into production, it seemed logical to extend the reinvigoration that had taken place in their personal relationship to their act. It was time to try something new.

Departing from the traditional sketch show and stand up routine that had served them so well for the previous eight years, the duo elected to turn their Saturday evening show into a situation comedy, in which they would play themselves staying in a luxury London apartment while making a TV series.

“We’ve done plays (which were) not very well supported – not because Cannon and Ball weren’t particularly good in it, or bad in it, or indifferent –  simply because we had an army of fans that wanted Cannon and Ball to do Cannon and Bal,” says Cannon “They didn’t want to see a sitcom on the television, they wanted to see Bobby going, ‘hey, rock on Tommy’. Well, in the sitcom that wasn’t allowed because we became, if you like, actors. (Perhaps it was a) wrong move for whoever made the final decision on it, but I certainly enjoyed doing it. But it wasn’t as well received as Cannon and Ball being Cannon and Ball again”

Despite the retrospective misgivings, the series did reasonably well, peaking at 11.4 million viewers. However, it was also the moment when the comedy pair turned a corner, finally achieving equilibrium in their private and professional lives.

Meanwhile, LWT’s Copy Cats was into its second year and still doing the business for LWT. This was unsurprisingly followed by another ensemble comedy series. Similar in format to Copy Cats, Saturday Gang brought together marginally alternative comedians Hale and Pace with the resolutely mainstream Kate Robbins and Gary Wilmot. Having come from a background of guest appearances on both Saturday Live and The Laughter Show, there was a schism in Hale and Pace’s career to date. Their flirtation with edgy comedy was perhaps best summed up by the most popular act of their repertoire: The Management. Here the duo acted as two tough, but stupid, doormen. The act was imbued with an edge of menace that rather disguised that fact that the material was in fact not that divergent from the mainstream.

For Saturday Gang,the duo contributed a series of comic characters, most notably a pair of Russ Abbot like Scots who appeared in the ongoing comedy segment “Jocknivar”. “We had just finished [a] performance (in Glasgow), when these two enormous men came up to us in a bar and asked us if we had been the ones who did the Scottish piece,” recalls Hale  “We thought we were really for it, but they burst out laughing and told us they loved us sending up ‘them Edinburgh fellers’. We didn’t like to point out that we thought we had been doing Glasgow accents!”

Saturday Gang  benefited from three of the four main performers taking an active hand in writing the scripts (Kate Robbins was the odd one out, although her brother Ted would contribute to the second run) and there was a sense that, although similar in tone to Copy Cats, Saturday Gang was somehow superior, its material more polished and its performers slightly more accomplished. It achieved excellent ratings (peaking at 13 million) and aided the careers of it four stars, all of whom would feature in the future of Saturday night television.

TVS was muscling in on the act too, with Bobby Davro on the Box. Following the success of a one-off special the previous year, the station had commissioned a six-part series for late spring 1986. Davro was billed as “one of the new generation of impressionists who have turned away from send-ups of ageing film stars and political figures to seek a younger audience.” “I like to come up with new impressions,” commented the man himself. “It’s no good doing all the same old people all the time. Generally, I look for people with lots of character and personality – there are plenty in the pop world, such as George Michael, Howard Jones and Stevie Wonder.”

Davro felt the second programme of the series charted new territory by featuring what he believed to be the first ever impression of Max Headroom. “I hope people won’t think we cheated and used Max Headroom voice tracks, because we didn’t. The make-up and wardrobe people did a fantastic job and I’m very pleased”.

Next Monday: That’s just not funny Bobby, it’s corny – just don’t do that