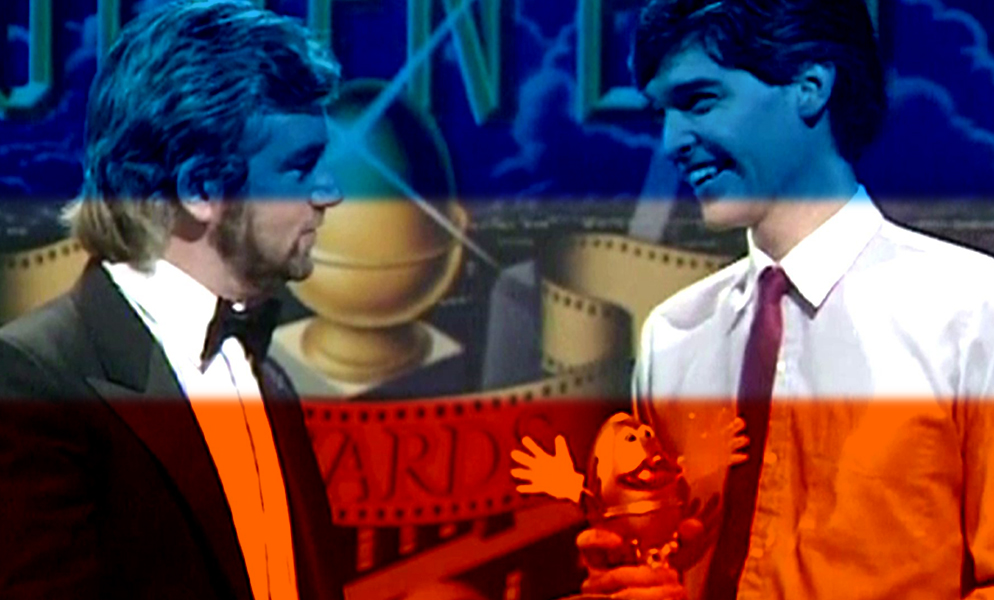 It’ll Be Alright on the Night producer Paul Smith took the decision to introduce the format to American television, and while in the United States was able to lay his hands on a wealth of footage for the “farewell” Christmas show. “We have tapped a very rich vein,” he reported. Nonetheless the production team still ended up sitting through hours and hours of clips in search of suitable material. “I suppose the ratio of what we see to what we use is around 500 to 1”. The Christmas It’ll Be Alright on the Night pulled in a sizeable audience – large enough to persuade Norden that the venture was worth sticking with for a little longer. Subsequent editions were broadcast on a rough two-yearly basis thereafter and the programme has gone on to become one of LWT’s most consistent ratings performers. The 1985 edition captured 18.6 million viewers becoming LWT’s highest rated programme of the station’s first 20 years. The 1987 Christmas edition pulled in 18 million viewers, making that programme, LWT’s sixth most watched of its first two decades.

In the main, press reaction to It’ll Be Alright on the Night was surprisingly uncritical. Had it been fronted by a personality with qualities more closely associated with Saturday evening light entertainment, then the whole enterprise might have been perceived as an extremely dubious product, typical of the “down market” direction of LWT during the early and mid 1980s. As a result of the success of It’ll Be Alright on the Night, Norden’s affinity with archive television was unleashed and he subsequently hosted a number of “clipboard” shows for LWT, including Denis Norden’s World Of Television, In On The Act, Pick Of The Pilots and Denis Norden’s Laughter File.

The concept of It’ll Be Alright on the Night, although not in itself original (its two most obvious antecedents are the American series Bloopers and the Christmas collections of gaffes long since compiled for personal entertainment by editing room staff at TV organisations such as the BBC and Yorkshire Television), spawned a number of imitators. Noel Edmonds adapted the formula for his own 1982 Saturday night series, The Late Late Breakfast Show, using the conceit of awarding a “Golden Egg” to the week’s most entertaining blooper as a way in which to thread together a number of out-takes. “We were right at the very beginning of what’s now known as bloopers,” is how Edmonds remembers it. “They were big in the States and we noted that.” This take on the Norden formula proved so successful that a spin-off programme, The Golden Egg Awards, was commissioned. As if to support Norden’s own belief that the general public bestowed greater affection on those celebrities that were shown to be most fallible, The Golden Egg Awards turned the winner of the most awards – Murray Walker – into a household name.

More substantially, in 1991 the BBC produced the first in a long line of outtake programmes called Auntie’s Bloomers. Much like It’ll Be Alright on the Night, these were produced as specials only, with a similarly mature presenter (Terry Wogan) picked to link the footage. Derided at the time for its lack of originality, Auntie’s Bloomers nevertheless repeated the ratings success of its ITV counterpart (with a 1992 Christmas special attracting 18.5 million viewers, and the 1994 outing attaining a still impressive 17.9 million). Less successful has been the two station’s sports based spin-offs. Auntie’s Sporting Bloomers was, unlike its parent show, or its obvious forebear, produced as a series of 30-minute episodes, and ITV’s own Oddballs (made for Carlton by Trans World International and presented by Eamonn Holmes) were never able to attract as sizeable an audience. Nonetheless, both programmes still represented excellent value for money in terms of production cost versus ratings.

“We had created the original, the Rolls Royce, the Beatles, whatever you want, everything else were just pale imitations,” says Smith. “So I wasn’t concerned at all and after all, imitation is the sincerest form of flattery. In an extraordinary punctuation, the BBC eventually decided that maybe they should be doing their own version and Jim Moir, who was the head of entertainment at the BBC at the time called me at Celador and said, would we be interested in producing Auntie’s Bloomers for the BBC, because we understood the concept and how to apply it. And we said, ‘Yes of course’ The title, Auntie’s Bloomers,was created by Denis Norden, when we were shooting It’ll Be Alright on the Night. We paid him for the right to use it.”

Next: “I’m still aggressive and I’m still handing out the insults”