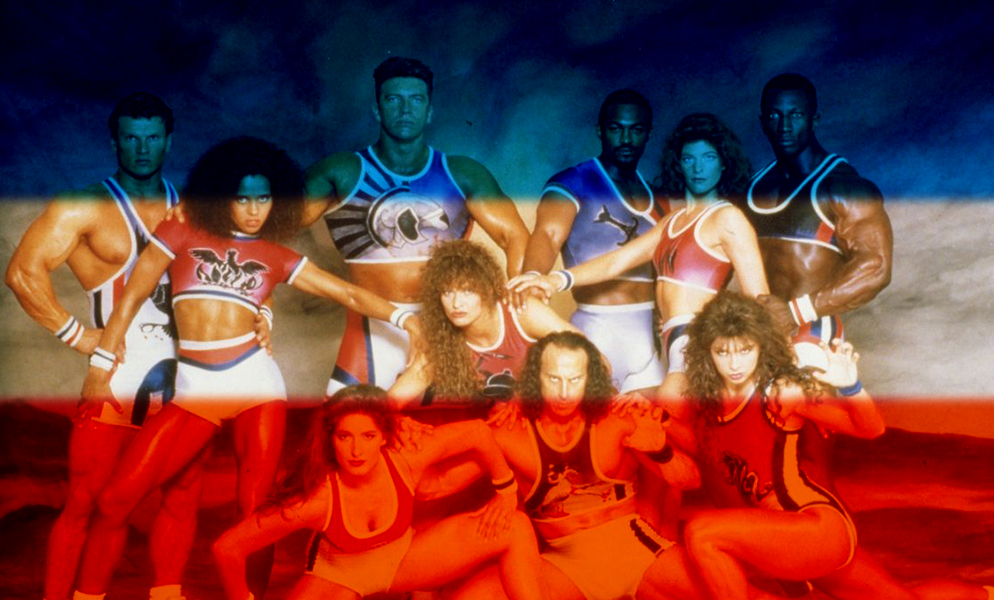 Meanwhile, one of Davro’s protégés was at last making waves over on ITV. Brian Conley had appeared in a number of sketch shows over the previous years, such as 5 Alive and This Way Up, but had failed to make an impact. Yet after winning a Variety Club award for 1991’s best newcomer (just five years after the launch of 5 Alive), he – and ITV tried again. The result was LWT’s Brian Conley Show, launched in February 1992. As opposed to his previous runs, which had been very traditional sketch and stand-up affairs, this was rather different, more like a stage show that happened to be on television.

As such, Brian started each show with a song, and then walked around the stage, changing costume en route, into a number of sketch scenarios, involving one-offs and a number of recurring characters. This had the effect of putting Conley centre stage throughout and recast him as a larger-than-life figure – the antithesis of the previous approach, which had seen him play a huge number of different characters. “Brian almost got lost in his own programmes,” explains the show’s producer Nigel Lythgoe. “He went at such a pace and had so many good characters, so many different teeth and wigs that the audience didn’t really know what he looked like on his own as himself.  So my job was to pull out the man first and foremost from the clutter.” Despite not being the most original format, it finally transformed Conley into a big star, and many more series were commissioned –for a time he was ITV’s biggest light entertainment name.

ITV’s other big new series of 1992 was something entirely different. American Gladiators had been a success in the USA for a number of years and had built a cult following in the UK after ITV imported it for its late night schedules. Many students discovered it after arriving back from the pub on Friday night. LWT purchased the rights from Samuel Goldwyn Productions, and launched their own version, entitled simply Gladiators, on Saturday nights from October. Once again, the man behind the show was Nigel Lythgoe: “I took [an episode of American Gladiators] home, watched it with my two boys, and the three of us just loved it. And my wife caught a little bit of it and sort of got a little involved, so it was obvious that it had a wide-ranging appeal. I think I went in the next day and begged to be able to make this programme.”

Lythgoe’s  plan was to make the British version even bigger and more raucous than its American counterpart.  “I went to the national indoor arena in Birmingham and talked them into letting us use it. We didn’t have anything, and it was really difficult to try and sell a programme where these big giants take on these little guys off the street with giant cotton buds – it’s just a crazy format. But we had the American tape to show them and everyone bought into it.

“Then we went on the hunt around the body-building fraternity to find these characters.  We used to sit in the office and try and think of names for them. And, and you know you would be so tired at the end of the day you would be coming up with names like ‘Wind’. But we came up with ‘Warrior’ and ‘Wolf’ and it slowly became a reality. Initially we couldn’t get the set in because the lorries were just too big. But then some bright spark said, ‘oh let the wheels down on the lorry’, and they and pushed it in. We finally got the set in with only hours to spare before filming.”

John Fashanu and Ulrika Jonsson were the presenters and the whole ‘David vs Goliath’ affair was greeted with, more or less, bemusement from the press. The Telly Addicts book, published around this time, sums up the general critical reaction – “What we need is a hit TV show for the weekend. Hints: big is beautiful! Games are fun! People identify with Goodies and Baddies! A simple gladiatorial combat works on TV!” Unsurprisingly the show became a massive hit with children and families, so much so that almost immediately after the first series ended, ITV scheduled a “review” of the tournament in virtually the same slot. It wasn’t as big a success with the older parts of the audience, though, with Noel’s House Party pulling in larger ratings, as once memorably illustrated by The Sunday People superimposing Noel’s head over a Gladiator’s body, to emphasise how he was “The Gladiator of Saturday night television”. Still Lythgoe was convinced from day one that he had a hit on his hands, particularly after he made a simple, but an important adjustment to the all-important end-of-episode challenge.

“The American version had, what we used to call the ‘travelator’ at the beginning of the finale. That meant if you got up that and carried on, whoever was in the lead stayed in the lead. And That was one of our major changes that I think affected everything: we placed the travelator at the end. You couldn’t turn your head away because the lead contestant would get to the travelator and not make it up. It was like a terrible game of snakes and ladders. It was the first time I think we intercut tears within a physical game show. We would have cameras locked on the contestants’ loved ones and just intercut during the run, and we would cheat it sometimes to lengthen it out. All of a sudden emotion was brought in to a Saturday night game show.”

If nothing else, Gladiators was a world away from the normal studio-based show that previously dominated on Saturday evenings, and it showed up those formats  as noticeably creaking at the seams. Perhaps the nadir of this sort of programme was Your Best Shot, a short-run series broadcast by BBC1 on Friday evenings in early 1993 – sadly, Marti Caine’s final series. For five weeks, Marti presided over a boring and pointless selection of studio-based games, inviting members of the public and celebrities to swap places, or members of the audience to take part in dull games on the stage. With a tiny audience, this was virtually the end for old-school variety on the BBC.

But what of Bobby Davro? Well, the BBC did eventually screen Rock With Laughter, albeit some months after originally planned, on Tuesday nights in July 1993. In each episode, Bobby was joined by the likes of The Grumbleweeds to take part in musical numbers and weak sketches. In the Evening Standard, Victor Lewis-Smith rallied against the series – “Contestants in pub talent nights perform dated material or do lousy impressions because they don’t know any better, but to allow such bilge on TV is an insult to the audience. This series … has been the last feeble gasp of the old light entertainment guard on BBC1. Thankfully I can’t see this, or anything remotely like it, getting back on air. Ever.”

Lewis-Smith also claims to have phoned the BBC to ask who was responsible for the series, and was told it was the Head of Variety, who he asked to be put through to. Their response – “I’m sorry, we don’t have one at the moment.” Clearly, big changes were afoot.