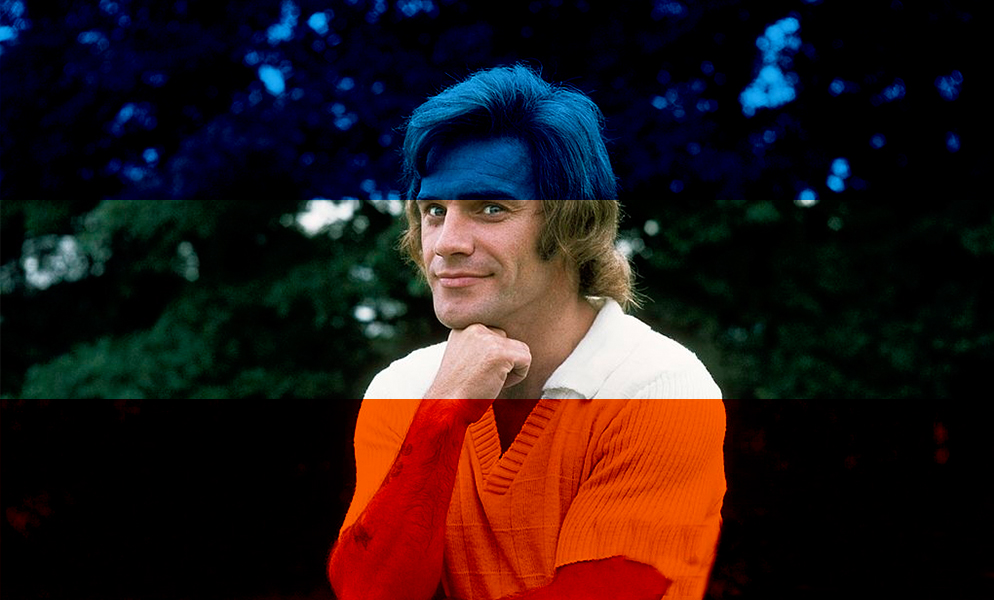 Although a disaster for Forsyth, Bruce Forsyth’s Big Night eventually came up trumps for Cannon and Ball who, on the strength of their never broadcast sketches, were offered an LWT series by Michael Grade. It was also to be a significant springboard for another Northern singer turned comic – and this entertainer had actually won an episode of Opportunity Knocks. Russell Roberts was to become a significant part of ITV’s Saturday evening line-up during the 1980s. His career in show business began when he secured a gig as a drummer at the Royal Theatre, Chester. The theatre manager insisted that an element of comedy was added to the act and the young Roberts (having only recently failed his O-levels) would work up a piece of funny business on a Thursday night and perform it on the following Sunday. Much of his comedy was inspired by the costumes and props that were at his disposal, and it was during this time that Roberts assumed the stage name Russ Abbot. Originally touring as a member of The Black Abbots, Russ was still performing with them when he appeared on Bruce Forsyth’s Big Night. “He was so good we had to bring him back later in the series to do another spot,” remembers Forsyth.

The show’s producer, David Bell was also impressed with Abbot’s comedic talents and cast him in one of his next television productions: Freddie Starr’s Variety Madhouse. This was not to be a happy experience though for Bell or Abbot. “The material just wasn’t up to scratch,” remembers Freddie Starr. “ … I just didn’t find any of it funny … I looked around at Russ Abbot and Bella Emberg and the other performers around the table. They weren’t too pleased either”. While the material might have been poor, the general wellbeing of the cast and crew was not helped by the feud that reigned between Starr and David Bell, who was executive producer of the show. David had produced Starr’s 1974 television special, Ready Freddie Starr, and the two had immediately crossed swords with Starr believing Bell gave him substandard material to work with. Of his 1979 encounter, Starr recalls that “(Bell) couldn’t keep his wandering hands off my arse! I knew David was gay, as were several other producers and directors at the studio … I couldn’t take to him at all. And when I repelled his advances he took a terrible revenge on me. He tried to destroy my television career …

“When my polite but firm approach failed to work, I showed David I really didn’t like him arsing about by turning around and saying straight to his face, ‘David! Get off!’ When that didn’t work, ‘Get off!’ became ‘Sod off!’ which in turn became ‘Piss off!’, before I let rip with the usually effective ‘Fuck off!’ … A big confrontation was on the cards and one day when the two of us were alone in the lift, he went to grab my arse again and I punched him hard in the stomach.” Unsurprisingly, the fracas failed to resolve the tension between the two, and as rehearsals continued, Starr accused Bell of purposely making him late by having an assistant incorrectly advise him that rehearsals were starting at 1pm. In addition, Starr invested much of his energy in rewriting the scripts and producing new material, which he felt he never received due credit for: “I felt betrayed by television and the shits who ran it … David Bell became ruder and ruder to me and apart from distributing lines I’d written for myself among the other performers, the writers had little to do for me. It became obvious to me that David was eager to feature Russ and the others much more than me – even though the show had been my idea and it was my name in the title!” Eventually Starr cracked and walked out, but not before lambasting Bell one final time in front of the entire production team. As he left, he passed a dumbfounded Abbot and apparently remarked to him, “Russ, this is your show now.”

And so, as ITV headed towards 1980, it was in as chaotic a state as ever. Typically, the BBC appeared a model of tranquillity in comparison. In September 1979, it had secured the services of Paul Daniels (after a successful turn on the Royal Variety Performance). The success of The Paul Daniels Magic Show was due to the magician’s determination to focus exclusively on magic (in fact a pilot edition featuring guest singers and other standard variety turns was scrapped as being too derivative). In addition, Jimmy Savile was in the midst of his long run of the then popular Jim’ll Fix It and Larry Grayson had successfully and effortlessly assumed responsibility for The Generation Game. “When they told me I was doing The Generation Game people expected me to worry” recalled Grayson. “Worry? Me? Everybody was worried but me. I just did the best I could.”

The man who picked Grayson for the job was Alan Boyd, then producer of The Generation Game. Having first considered approaching Jimmy Tarbuck and Roy Castle (who stood in for Forsyth for one episode on 29 November 1975), Boyd was impressed by Grayson’s performance on the ATV series, Shut That Door and decided there was an opportunity to try something different. “When you change hosts of a major show like that you can’t go in the same box otherwise you’re criticised,” he explains. “So I went up to see Larry in Great Yarmouth one night. I sat there and laughed and thought, ‘will he be able to do it?’ ‘Yes I’d love to do it dear,’ he said.”

Unlike Forsyth’s first attempt, Grayson’s pilot episode wasn’t a smooth operation. It was only when responsibility for explaining each of the games was given to assistant Isla St Clair that the programme began to work. “I went home one weekend,” remembers Boyd on his casting of St Clair. “My father had angina and I was sitting around one Friday night and switched the television on. There was Isla St Clair hosting a show on Scottish Television. She looked quite good, so we got her down to talk to us. I though she was spiky, but had control and knew the mechanics of television.

“So we did a pilot, which took about three days to edit because Larry couldn’t link anything properly and didn’t understand what he was doing. We suddenly realised that Isla could take the control mechanism. She controlled the movement within the show. Whereas Larry just stood around saying, ‘where do I go now dear?’ But the public loved this vulnerability.”

Not that all viewers were complimentary of The Generation Game. Writing in 1980, Denis Curtis was highly disparaging of “the Rolls Royce of quiz shows”. “A sense of the macabre compelled me to watch most Saturday nights,” he began, “but could 20 million other viewers either be masochists or camp followers? That was the size of audience that this amateur night at the BBCtv theatre drew.” Curtis then proceeded to outline a little of how The Generation Game (1980 style) was made: “The games are played absolutely straight. The contestants come to London the night before the recording and are put up in an hotel. On the day, they have two ‘get-together’ meetings with Larry Grayson and Isla St Clair. They are then locked away from the performance area and only come on stage one hour before the recording begins. This is so that they can be made familiar with their surroundings and the kind of routine that Mr Grayson will put them through. For this, producer Alan Boyd acts the part of Larry Grayson with uncanny accuracy.

“They do not see the games in advance and what they have to do comes as fresh to them as it does to the viewing audience.” Finally, seduced by Grayson’s charm after spending some hours with him backstage, Curtis is able to conclude on a relatively positive note: “What took me most by surprise was that it was not Larry and Isla who were the stars of the show. It was the contestants. They were feted, cosseted and made to feel like the most important people there. Which is what the game is all about. There was no feeling of humiliation, just happy people playing at charades.”

Next: “The awesome scale of our wastefulness”