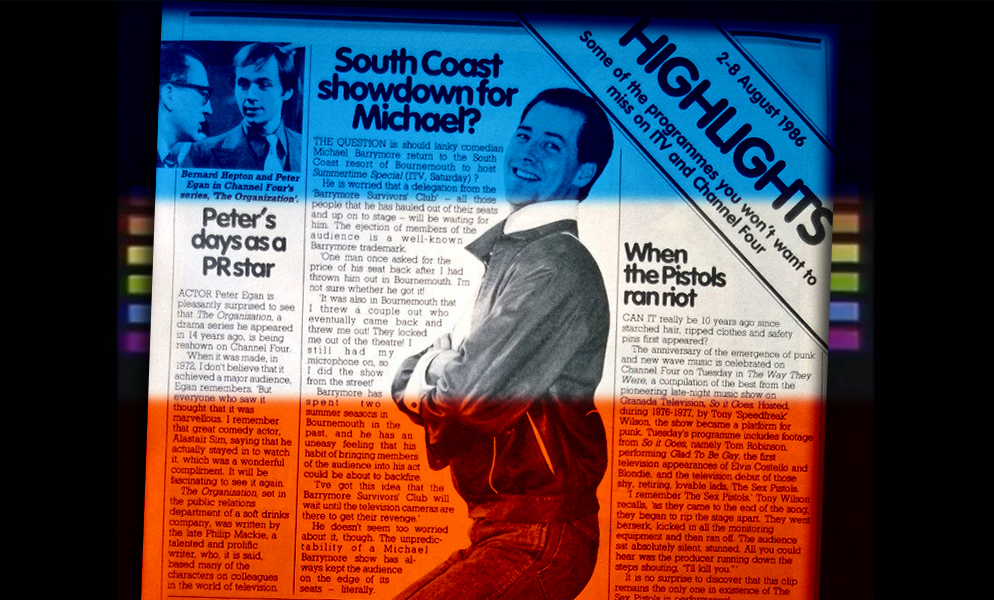 Recognising that their best tactic was to live up to their promises, TVS invested a lot of time and money into quality drama series, such as The Ruth Rendell Mysteries, as well as avowedly popular programming. Series like Bobby Davro On the Box and Catchphrase signified TVS’ intent, while at the same time served to confirm that Birt’s manoeuvres to land Dyke the job at TVS had paid dividends to ITV’s Saturday night schedule as a whole (and therefore had benefited LWT exponentially).

“We were able to create, if you like, a kind of mini LWT on the south coast,” is how John Kaye Cooper remember it. “After a couple of years, this caused no amount of problems with the rest of the network who were very jealous of TVS’s position –almost like a sister company of LWT, even though it was a separate franchise.  It upset them that we were actually creating successful shows – Catchphrase being one, Bobby Davro On The Box, and then Bobby Davro’s TV Weekly, Summertime Special at Bournemouth. For little TVS it, was a bit of a shock to see a kind of Blackpool Night Outtype show coming from, from Bournemouth.  This really did upset the applecart in ITV. We were happy, we were delighted.”

As if to finally confirm that TVS sought to become a major player at the weekend, the station even produced its own Saturday evening sketch series. As with Copy Cats, Five Alive featured a fresh young crop of comedians. It first appeared as a one-off special in 1986. “There are not many laughs in creating a new TV comedy show with a fresh team of artists,” opined the TV Timesin its preview. “Most effort recently has gone into late-night adult shows and late-afternoon children’s shows, but Five Alive… is aimed at peak-time family audiences, the most difficult market.”

TVS went to great pains to bring together a collection of comedians that balanced the experienced-but not famous, with a few new bright hopes. The best-known face was probably Andrew Secombe, Rover the dog from the Channel 4 series Chips Comic and son of Sir Harry. Also appearing were out-and-out comic Peter Piper, Eve Ferrett (from Bottle Boys) and Sharon Maiden (who also featured that year in the John Cleese film Clockwise, and would later feature as Nola Duncan in Footballer’s Wives). However, the pilot edition’s greatest find was unarguably Brian Conley. At the time he was most famous for his stint as host on the “Kopy Kids” segment of TVS’ Summertime Special. This always-popular segment would see young children impersonating pop stars and gave Conley great scope for his comedy musings. Five Alive offered Conley the chance to try out a range of comedy characters, as well as develop his skills as a stand-up comedian.

“TVS were very new at all this,” says Brian, “and the great Paul Mayhew Archer, who writes Vicar of Dibley was brilliant and key in in creating for me Nick Frisbee and Dangerous Brian. Two characters that people will always remember. But Five Alive was a family fun sketch show, which was always very difficult, not very street-cred, but it pays the rent.

“What I really liked about it though was we used to get in the bar after recording and just all start to sing.  And we’d end up doing these little harmonies and at the end [the producer Alan Nixon] said ‘right I’m going to put this into the show’. But you know, it’s family time. I think we weren’t even allowed to say ‘bum’. I had a joke about my girlfriend – ‘she’s so big she used to rub her footprints out with her bum’ and was told I had to say ‘bottom’, and I said, ‘well bottom’s not funny’”.

Conley would go own to enjoy a profitable association with first TVS, and later LWT as his star continued on the ascendant throughout the 1980s and into the 1990s.

The pilot episode of Five Alive was deemed a success, and TVS commissioned a full series for the following year. A change in line-up took place, however and into the fold came Doon Mackichan. Given her subsequent appearances in numerous The Comic Strip Presents productions as well as roles in the BBC’s innovative comedy series The Day Today and I’m Alan Partridge, to find that Mackichan started out in an unashamed mainstream Saturday night sketch show is surprising indeed. That she should appear again in an ensemble sketch series such as Channel 4’s Smack The Pony makes the incongruity complete and provides a direct connection back to that earlier programme, confirming that television careers can evolve in the most unusual of ways.

Of course, in the litany of TVS productions designed to capture a sizeable Saturday night audience, one cannot ignore the aforementioned Summertime Special. Obviously based on the BBC series of the late 1970s, Seaside Special (which amongst other things cemented the fame of the piano playing Bobby Crush) as well as the corporation’s early 1980s variety show (also called Summertime Special), TVS’ own version adhered to the tried and tested template featuring a seaside resort (in this case the Bournemouth International Centre) and a dazzling, but relatively inexpensive line-up of acts.

The first edition on 19 July was unsurprisingly compèred by Bobby Davro, and featured acts such as Richard Digance, Five Star, the aforementioned Brian Conley as well as 1980 Search For A Star champion Dave Wolfe. Stu Francis figured too (then associated with TVS’ Ultra Quiz) making the first edition something of a “family affair” for the ITV station.

“Summertime Specials were a lot of fun,” remembers Conley.  “That Bournemouth International Centre Theatre is hot, but it worked because it was such a vast area.  I mean there’s 3,500 people in that room.  And I just remember, God bless him, David Bell, the producer, just wielding his power in the auditorium when we were rehearsing with his microphone.”

Michael Barrymore would host the 8 August edition, using it as a platform to fine-tune his increasingly anarchic stage routine. The following week (featuring Les Dennis) would include Jim Davison and Aiden J. Harvey (fresh from The Copy Cats) as well as the Nolan Sisters and would draw Summertime Special’s highest audience for that series (10 million viewers) comparing very favourably with the earlier BBC series (which attracted at its peak only 9.6 million viewers). The final edition of the first run retained the Copy Cats theme by allowing Gary Wilmot to host. This episode was deemed particularly notable at the time for its inclusion of Grace Kennedy, “the resident singer, who, following the failure of her marriage to a millionaire at the end of last year, has thrown herself into her work.”

Summertime Special returned for a second series the following year, this time with Lulu ensconced as the regular singing act. Similar in tone and style to that which had gone before, year two of Summertime Special saw the likes of Jim Davison, Kevin Devane (who also appeared in Five Alive), Nino Firetto, Five Star, Johnny Logan and Hazel O’Connor all appearing. Again broadcast from the Bournemouth International Centre, it fared even better than the previous series, finding itself the sixth most watched show of the week (with 10.6 million viewers) on 8 August 1987.

Next Monday: We are the funnymen