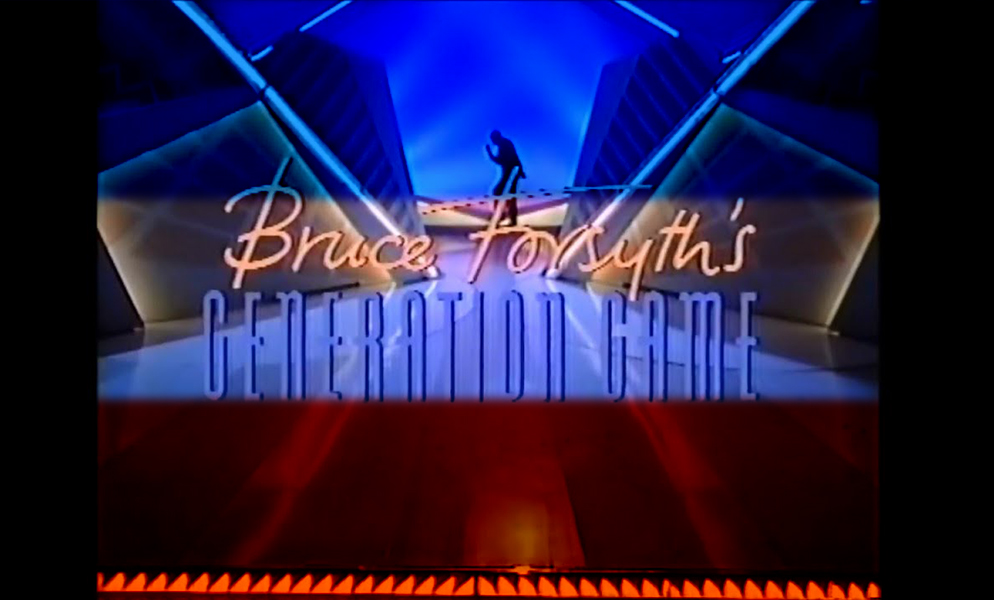 In 1990, the BBC managed to trade in one master game show host for another. Bob Monkhouse had been presiding over Bob Says Opportunity Knocks for three years, and his manager Peter Prichard felt that a change might do him good. Central Television was keen to enlist the entertainer and began to sound him out over the possibility of presenting modern day versions of two successful American game shows from the 1950s – The $64,000 Question and You Asked For It. Monkhouse felt there was mileage in the former series, but the latter, which relied upon archive footage, didn’t appeal to him.

“I suggested bringing back Celebrity Squares,” he explained, “but Tony [Wolfe, head of Entertainment at Central Television], his rounded face composed in cordiality beneath a cap of grey hair, demurred. ‘With the greatest of respect, Bob, we want you to come home to Central with something dazzlingly new.” That something new would turn out to be Bob’s Your Uncle, an energetic game show involving elements of  The Golden Shot and other programmes. While a lavish production, it was cancelled after 26 episodes having only attracted 9.3 million viewers, and immediately after Monkhouse went into production on a new series of all things, Celebrity Squares.

Meanwhile, having proven himself remarkably adept at stepping into someone else’s shows, Les Dawson – who had made a success of succeeding the much loved Terry Wogan as presenter of Blankety Blank -was now asked to take over from Monkhouse on Opportunity Knocks.“I’m sure following Bob won’t be easy,” Dawson commented in March 1990. “But I want to do more of a straight introduction to the acts and find the comedy when I talk to the contestants afterwards.”

Clearly, Dawson felt that any comedy business prior to an act performing could result in them feeling upstaged even before they’d begun. “I’ll tell them to go out there and play to one family. If you start thinking in terms of how many people are watching, you’ll be terrified. And I don’t think they should regard winning as that important. The main thing is that they will have shown their faces and given someone the chance to spot their potential … You know, they call it a talent-spotting show, which is exactly what it isn’t. If people didn’t already have the talent, they wouldn’t be there. What they need is a shop window – and that’s what I want to give them.”

Dawson’s tenure on Opportunity Knocks was to be less memorable than Monkhouse’s and would last only one year. The series – with its mixture of comedians, magicians and other specialist acts – was too diverse. In an age when viewers were looking for specialisation in their entertainment shows (such as Stars In Their Eyes) Opportunity Knocks– as it always had done – was trying too hard to offer up something for everyone.

However, while ITV had been busy procuring the services of Bob Monkhouse, one of its own was being tempted to return to the BBC. Perhaps more than any other entertainer, Bruce Forsyth is renowned for swapping his allegiances back and forth between ITV and the BBC. 1990 found him pigeonholed by his role as presenter of the ITV game show, You Bet! “I personally felt it didn’t allow me to have much fun. For the first time in my life, I was more often than not simply a presenter, not an entertainer, and I missed the opportunity of having a real laugh with people.” Sensing an opportunity, the BBC’s Head of Light Entertainment Jim Moir approached the star with a view to return to hosting game shows back at the corporation.

The first programme Forsyth got his teeth into back at the BBC was a brand new Saturday night game show called Takeover Bid. It was evident that the series was meant to be a slightly more modern take on the game show genre with half-hearted parallels being drawn between the contestants’ attempts to win prizes from one another and the activities of the stock market. In truth the show was never going to be a big-hitter, regardless of the BBC’s attempts to write it up in their pre-publicity. “[Bruce]’s presenting Takeover Bid with all the brio that attracted an eager audience of 25 million to The Generation Game on Christmas Day, 1976,” reported the Radio Times in June 1990. “Takeover Bid, where the contestants are given prizes at the start of the show and then battle to keep them, marks his return to the BBC after a long, lamented absence … He is able to get away with the atrocious puns and finely balanced insults on Takeover Bidbecause, he says, ‘I come on pretending to be a lot grander than they know I really am.'”

Although Forsyth was able to make more of an impression on Takeover Bid than You Bet! (including a section at the beginning of the show where he could chat with the contestants, and singing the show’s opening theme), the game at the heart of the programme was perhaps too linear and straightforward for Forsyth to really get his teeth into. “It was all right as game shows go,” he remembers “but not going great guns. Its formula was very simple … Now, if [the contestants] had been competing for prizes worth up to five thousand pounds, plus maybe a car at the end, this would have been exciting, but the prizes that were offered were not big enough, and of course in those days the BBC couldn’t give big prizes away.”

Although it would run for two series, Takeover Bid would only ever form a footnote in Forsyth’s long and illustrious career. The real reason for his return to the BBC would become apparent even before the first edition of Takeover Bid was screened. Moir was keen to revive The Generation Game with Forsyth back at the helm. Clearly the BBC had struggled to find a replacement since its demise at the hands of Game For A Laugh almost 10 years earlier. While The Late Late Breakfast Show had looked like securing a large and faithful following, since its enforced demise in 1986, the BBC had few “big guns” left to roll out on a Saturday night.

As we have seen, comic turns such as Little and Large were on the decline and The Noel Edmonds’ Saturday Roadshow although a decent show in its own right didn’t have the longevity that the BBC required, or the same degree of public affection that The Generation Game had (perhaps uniquely) enjoyed. Besides ITV was running away with Saturday nights thanks to the enduring popularity of Blind Date (which in 1990 celebrated its success with a special programme – The Best of Blind Date– featuring amongst other things one time contestant Claudia Patrice singing in a specially filmed sequence at a top London Health spa).

“Jim Moir ,,, had invited me and Billy Marsh [Forsyth’s agent] to lunch,” remembers Forsyth of how Moir broke the news to him. “But he’d waited until we reached the coffee stage before saying: ‘Bruce, what about coming back to do The Generation Game?’ ‘Good heavens,’ I replied, taken aback, ‘That’s the last thing I was expecting, Jim. It’s 13 years since I did that.’ But having recovered from the initial shock, I said, ‘Let me think about it for a couple of days.'” Forsyth, deliberated over the decision. He watched some old editions of the programme and was pleasantly surprised by how well they stood up. After some persuasion from Marsh and further discussions with Moir (who assured Forsyth that any new series would be fast-paced and suitably contemporary), Forsyth eventually agreed.

This was big news for the BBC, and at the end of March the push for contestants began in earnest. “The Generation Game is returning to the BBC,” proclaimed the corporation. “Now is your chance to be a star for the day! The programme is looking for lively, outgoing couples of opposite sexes who must be related with a generation gap between them (for example, mother/son, father/daughter, grandfather/granddaughter). When selecting candidates, the programme aims to represent people of both sexes, all ages, racial backgrounds and from all areas of the United Kingdom. It will also welcome applications from disabled people.”

When it debuted, it became clear that the new Generation Game was – in fact –much like the old one. The show’s famous set piece in which contestants performed a playlet didn’t make an appearance until the fourth episode, but in most other respects The Generation Game was relatively faithful. Forsyth’s “Girl Friday” for the new series was accomplished dancer Rosemarie Ford. Ford’s most recent television appearance had been in an edition of Bobby Davro‘s Sketch Pad and she proved to be a perfectly acceptable foil to Forsyth, much in the manner of Anthea Redfearn and Isla St.Clair before her.

Incidentally, times had been tough for St Clair since the demise of Larry Grayson‘s Generation Game. She had become something of a showbiz outcast when she became involved with salesman Tony Sawford, who at the time was on bail before being imprisoned for drug smuggling. Upon his release in 1987, the couple became inseparable and were married in Portugal in 1990. However, their attempts to make a new life for themselves there as owners of a bar failed after just three months when they were forced to return to the UK with their investment lost. The couple split up soon after and St.Clair started to rebuild her life (eventually ending up as an award winning movie director with her own production company).

The Generation Game got off to a slow start with only 9.4 million viewers tuning in during the first few weeks, however over the following months it began to creep up the ratings (11.2 million in October, 11.9 million in November) and by Christmas day 1990 it was once again a firm fixture in the BBC schedules attracting 16.7 million viewers. Bringing the series back had always been a risk, and there had been no guarantees that Forsyth would be as successful the second time around. However, the first series of the new run at least suggested the gamble made by Moir and Forsyth had paid off. Although ITV still held the number one and two slots in the Saturday night ratings war (with Blind Date and Beadle’s About, respectively) The Generation Game was closing in fast and ended the year just 400,000 viewers behind Beadle’s show.

Next Monday: The characters and situations are real