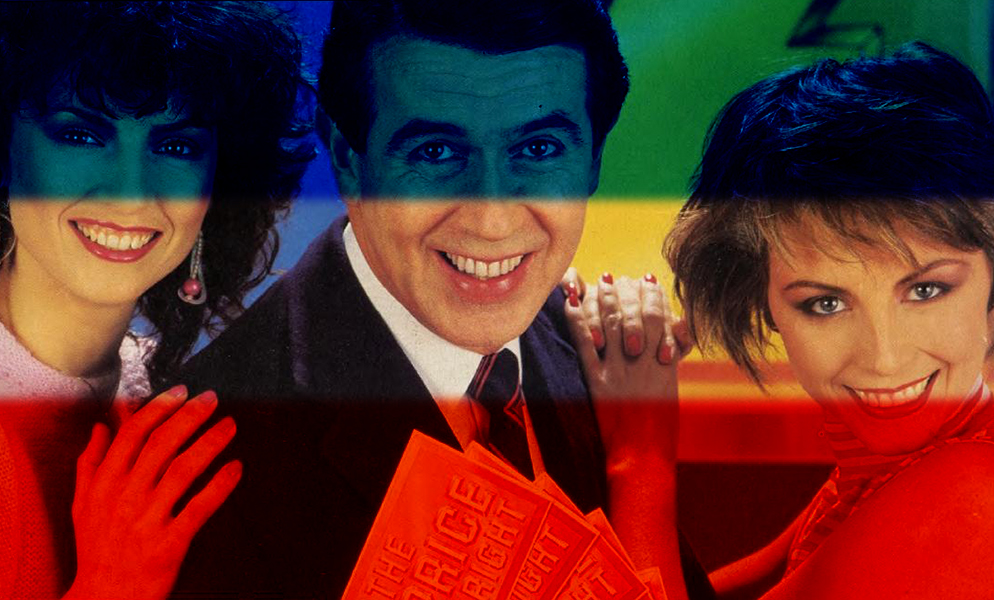 “I think the third programme in the series was number one in the ratings,” says Stewart. “Coronation Street was gone, everything else had gone with it. The Price Is Rightwas the top. The press reaction was slightly less enthusiastic. I think the critic of the Daily Express referred to it as ‘Stinkweed now on television.’ I think it was a shock to people. What is this thing that’s arrived on our screens?” The press did hate the series, describing it as too American and too vulgar. The show’s fixation with the cost of everything, coupled with an audience enthusiastically cheering on “greedy” contestants was too much for some to bear. The Daily Mail described it as “unspeakable, vulgarity, ghastly materialism and unedifying greed,” while The Guardian labelled it “the noisiest, most money-grabbing show so far”. “Monitoring a year’s output of light entertainment requires a certain kind of pathological, almost masochistic determination,” wrote critic Stephen Dark. “Particularly this season when this catch-all arena of quizzes, game shows and chat show set out to establish itself as the death’s head of British culture.”

While dismissive of light entertainment in general, Dark was especially contemptuous of The Price Is Right, describing it as a “blatantly commercial, aggressively self-centred form of spectacle that clearly reveals the downgrading principles on which so much of the ratings success of this type of programming depends … The sheer pace of the proceedings encourages an almost absurd anonymity as a result of which the viewer is forced to search for any fleeting details of intimacy displayed by the contestant, beyond certain ritualised gestures which, by the end of the season had become stock performances (the most noticeable being shaking a fist violently at friends in the audience, once having reached contestants’ row).”

Dark’s criticism of The Price Is Right,while especially vitriolic was not unrepresentative of the reaction the programme created. The manner in which contestants were commoditised and used would come up countless times as an issue for discussion, with some suggesting the camera direction was deliberately designed to show contestants in an unflattering, or foolish light. Even aficionados of the game show genre would later come to the conclusion that – while a brilliantly realised piece of television – The Price Is Rightseemed hollow and soulless, failing to bring to the games any degree of humanity. Writing in 1986, Laurie Taylor and Bob Mullan reflected that “opportunities for ‘personality play’ in The Price Is Rightare … much more scarce than in such other contemporary games shows as Play Your Cards Right, where a great deal of ‘space’ is provided for Bruce Forsyth to bounce verbally off the contestants and even to parody other game shows and his own role in the present one.”

“[The press] thought it was common,” believes Stewart, “and they thought it was vulgar that people should be shouting out to win prizes … there were elements of snobbery … they didn’t like the idea that people could enjoy winning.”  Not that the television audience minded. The Price Is Right was regularly attracting 16 million viewers. Perhaps even more importantly, advertisers also looked kindly upon it. Chris Walker, associate director of Benton and Bowles, commented at the time “The Price is Righthas all the right ingredients for a big audience.”

However, just as it looked as if Central Television had provided LWT with another Saturday night ratings banker, industrial action returned again. “Central Television has now resigned itself to losing at least two episodes of its scheduled 13-part series of The Price is Right, as a result of a dispute with electricians at the company’s Lenton Lane studios in Nottingham,” ran a report in 1984. “The dispute, about overtime pay, has resulted in the suspension of four electricians. ‘We have now accepted that there will be no Price is Righton 21 April,’ a spokesman said. The company planned to replace the 14 April edition with an LWT Candid Camera special, and next week an episode of TJ Hooker will be transmitted instead”.

“Everything ground to a halt,” remembered Crowther. “Everything, that is, except the coach load of potential participants, who like so many Sorcerer’s Apprentices kept on arriving at the studio. I entertained them (I hope) with my cabaret act, for which a piano was brought in.” The strike was resolved relatively quickly allowing Crowther to return to work proper, but not before the nascent The Price Is Rightran into yet another problem. “The IBA has ordered changes in Central’s big new Saturday night quiz show The Price is Right,” reported the March 30 edition of Broadcast. “The authority ruled that the value of the prizes given away in the show should not exceed £1,750 per show. However, in the course of the first three shows over £7,000 worth of prizes, including jewellery, TV sets and furniture was won by contestants. The IBA has also told Central that a spinning wheel section of the show must be changed as there must be an element of skill in winning.”

The changes were duly made, and finally series one of The Price Is Right was in the can. William G. Stewart had advised Crowther the show would give his career a new lease of life, and keen to exploit the new opportunities that lay before him, Crowther took The Price Is Right to the stage in Blackpool with disastrous results. Savvy contestants worked out a way to cheat the game, and therefore win all of the prizes on offer. As such, the burden of this unexpected cost meant there was no money left over from the ticket receipts to pay Crowther’s salary.

The rise of The Price Is Rightcoincided with the demise of another, once hugely popular series. “ITV’s longest-running game show, Anglia Television’s Sale of the Century is being dropped,” we learned in mid-1984. “Officially the 14-year old quiz show, hosted by Nicholas Parsons, is being ‘rested,’ but if Sale of the Century ever resurfaces Anglia says it will be in an off-peak slot … Sale of the Century is one of Anglia’s most successful programmes. During its peak in 1978 the show was watched by 21 million viewers. More recently it has attracted under one million viewers”. As recently as 1980 it had pulled in ratings of up to 10 million during its Saturday night broadcast, however its quaint format and relatively meagre prize fund had seen viewers drift away, attracted by the brashness and excitement of a modern generation of game shows. Not that all entrants to the genre needed to be big budget affairs. LWT’s Child’s Play relied not on big money prizes, nor on excitable audiences, but on the ability of young children to “describe their surroundings in their own, sometimes hilarious way”.

Child’s Play was representative of a sub-genre of game shows that teamed up members of the public with celebrities. Presented by Michael Aspel, contestants were challenged to work out which words were being defined by a group of young children. Somewhat sedentary in pace, it was a pole apart from The Price Is Right’s hype and glamour. Even the celebrity guests seemed to reflect the programme’s low-key tone (the first series included Patricia Brake and David Hamilton), yet Child’s Playwas almost as successful as The Price Is Right (peaking in 1984 with 15.3 million viewers for the 25 February edition). The series would run, with little fuss, for several years – the perfect epitome of the Alan Boyd concept of television – cheap to produce, easy to make and extremely popular.

Game shows had now supplanted variety as the Saturday night television genre and all the big new hits seemed to be happening over at ITV. However, 1984 was also a good year for drama.

Next Monday: We’ve got the fucking lot!