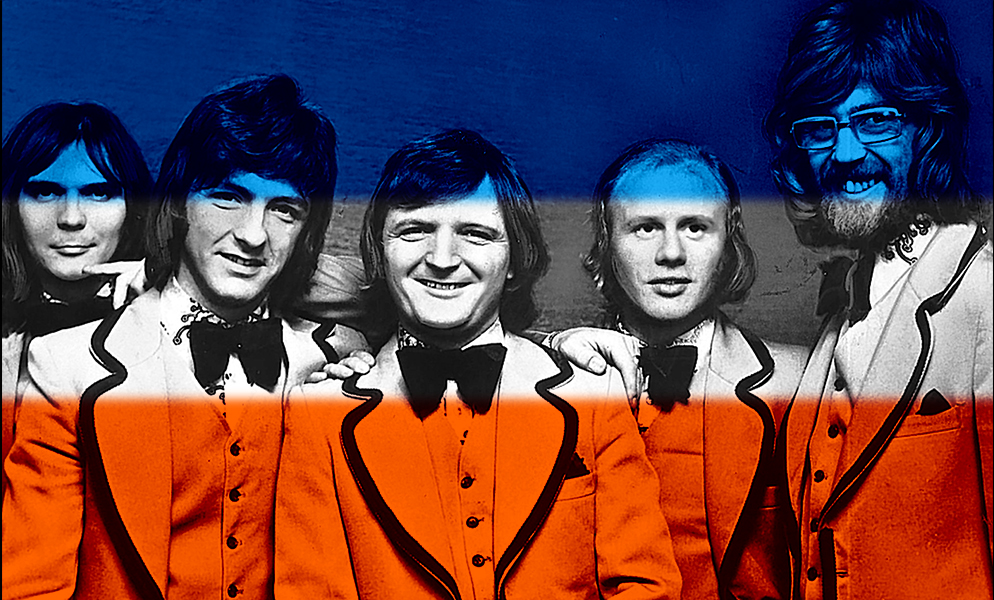 Between them it might have seemed that TVS and LWT had the monopoly on mainstream Saturday evening comedy series, yet this was not entirely the case. In Leeds in 1962, Robin Colvill and Graham Walker had got together to form a band. Turning professional in 1967, they endured an ill-fated appearance on Opportunity Knocks (where they reputedly received the most cursory of applauses from the studio audience), and determined that a career as a “straight” musical group was evidently not for them. Introducing comedy performances into their act, the group (with their numbers now swelled thanks to the addition of Maurice Lee and Carl and Albert Sutcliffe) changed their name to the Grumbleweeds, found success on Max Bygrave Meets New Faces and began a long association with Granada Television’s talent spotter extraordinaire Johnny Hamp.

The group secured a children’s series on the BBC in 1973 (The Coal Hole Club) and returned the following year under the simpler name of Grumbleweeds.This was followed with further success on Radio 2 with their The Grumbleweeds comedy series (1979 – 1988). Once again, though Hamp intervened and was instrumental in bringing the troupe back to television in 1983, offering them their own Granada Television one-off special. This led to the establishment of a full series the following year, and by 1986 the Grumbleweeds were embarking on the series number three of The Grumbleweeds Radio Show.Anarchic and diverse, The Grumbleweeds Radio Showwas highly distinctive, not least for the brevity of the sketches. In a typical 30-minute edition the Grumbleweeds were able to include as many as 40 separate skits. “If one joke doesn’t appeal, the next one, delivered a few seconds later, probably will,” explained Hamp, who was instrumental in shaping the series. Indeed, The Grumbleweeds Radio Show was – in respect to pacing – most reminiscent of the earlier Granada comedy series, The Comedians (another programme that Hamp had worked on).

Music too played an important part in shaping The Grumbleweeds Radio Show’s. In fact, all of the group’s songs were recorded in advance of the production of each episode. “These are long days” remarked the Grumbleweeds nominal straight-man Maurice Lee, “some times 12 hours but good fun.” Typical of the complexity of the group’s compositions was the song “We Are The Funnymen” which featured 25 different impressions. While most of these were recorded by founder members Robin Colville and Graham Walker, for the recording of the episode itself it was not uncommon for other members of the band to mime along to the duo’s performances. “We just use each other’s talents” explained Lee. “If I can look like Rolf Harris, and Robin can sound like him, that’s the best way to do it.”

In many respects The Grumbleweeds Radio Show was a Northern version of Russ Abbot’s Madhouse, combining zany humour with quick-fire sketches in a manner similar to the LWT series. Both also offered the audience a litany of characters to latch on to (the Grumbleweeds gave us Wilf “Gasmask” Grimshaw and “the Milky Bar Kid”) as well as impressions of well-known celebrities such as Jimmy Savile. But perhaps the greatest similarity between the two series was their enduring popularity with the audience (The Grumbleweeds Radio Show attracted up to 11.8 million viewers) and in particular, younger viewers.

Unlike Abbot and his fellow inhabitants of the Madhouse though, the Grumbleweeds influence on Saturday night television was to be less pronounced. Their ITV series ran until 1988 (by which time Carl and Albert Sutcliffe had left) and afterwards the group returned to radio with Someone and the Grumbleweeds running from 1989 until 1991. They continued as a three-piece touring clubs and theatres up and down the land until 1998, when (according to their official website) in an attempt to “anticipate future trends and remain one step ahead of the pack, by making exactly the right move at exactly the right time,” the Grumbleweeds reverted back to the original twosome of Colvill and Walker and changed their name to the rather cumbersome but informative “Walker and Colvill from the Grumbleweeds”. “Drawing on all their years of experience and know how, they developed, up dated, and introduced a sparkling new, fast moving act” revealed their website, “embracing the entire spectrum of entertainment, to take them into the millennium with a vengeance. Yet despite the change, the emphasis has remained very firmly placed on music, comedy and impressions. The Grumbleweeds are featuring a much wider range of impersonations in their act, all current favourites and bang up to the minute. New trends are anticipated and new stars put into the act as soon as they achieve success. The act is continually updating its material.”

Next Monday: The powers that be listened to Denis