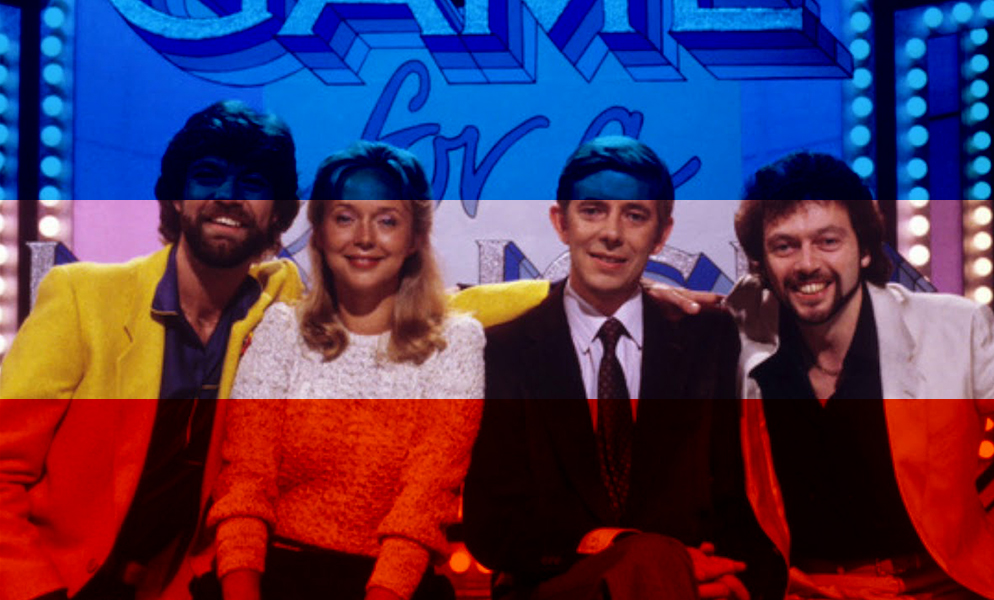 “Those of us who watched (Game For A Laugh) for the first time, did so in slightly gob-smacked admiration,” says David Docherty, TV executive and author of Running The Show, the history of London Weekend Television. “They are running down the stairs, all that energy coming out of LWT’s studios, and then actually it’s very simple, four people on stools and the kind of gags that we were used to seeing from Candid Camera. Alan Boyd made the alchemy work.” Much has been made of Game For A Laugh’s innovative format. It has often been described as the first proper “people show”. Whatever it was in 1983, commentators were still struggling to get to grips with it. “Game For A Laugh is not a magazine programme but it looks at the people usually described as ‘ordinary’”, reported that year’s IBA Yearbook. “Game For A Laugh is not a talent show but it features many professional acts that would otherwise never be seen on television … It is not a game show but every week members of the 500-plus studio audience in LWT’s studio one clamour to answer Jeremy Beadle’s call: ‘What I am looking for this week is … ’ Although not a children’s show, younger viewers love to watch the series … Game For A Laugh is not just devoted to the weekly practical joke stunts but 11,000 wrote in after the first series suggesting their husbands and wives or mothers or bosses for that regular slot … It is not a variety show but stars have appeared on it … Game For A Laugh is not an American import, although US production companies with experience in some areas have helped to provide basic ideas”.

Fundamentally, Game For A Laugh offered nothing that was in itself new to television (many of the games were indistinguishable from those that had appeared on The Generation Game. While the weekly stunts were Candid Camera antics played out with added back story explaining why that week’s particular victim had been selected). The originality of Game For A Laugh was in the sheer variety of items covered in each week’s edition. A typical episode might include a game in which members of the public are invited to identify a celebrity simply by touching his or her head (as lampooned on Not The Nine O’Clock News), a film of rock and roll star Joe Brown returning to his first job as a steam locomotive fireman, Sarah Kennedy being persuaded to touch a boa constrictor at the climax of an item about a man pulling snakes out of a box, a report on the annual raft race from Loch Tay to Aberfeldy, and – as a climax to the show – an elaborate practical joke such as appearing to wreck a car with a crane, or placing a lady’s entire home furnishings into an auction (which she is then made to bid for).

“You’ve got to be creative every week,” says Boyd. “Like The Generation Game you had seven games, none of which were allowed to fail. That’s why we had funny film pieces, studio pieces, silly pieces – somebody who had 500 gnomes in the garden. Or painting the Forth Bridge.” Boyd recognised the hosts would be integral in controlling the ever-changing focus of the show, with each one assuming responsibility for a particular type of item. In this respect, Game For A Laugh owes much to the presentational style of one of the BBC’s longer running series. That’s Life! had a scope even wider than Game For A Laugh, with each episode dealing with a range of issues both serious and frivolous. Employing multiple presenters afforded the spoken narrative items a degree of visual variety (by having each presenter assume the role of one of the protagonists in the story Esther Rantzen was recounting), but more importantly, switching from one presenter to another provided a natural change in tone negating the requirement for those torturous links that characterises other British magazine programmes. The skill of Game For A Laugh was to take this method and apply it to the genre of light entertainment. Aligning particular types of items against presenters also allowed the audience to keep up with what was going on. Your appetite was whetted as soon as your favourite presenter rose from their seat.

Not everyone at LWT recognised the potential of Game For A Laugh’s carefully devised format and Boyd found himself threatening to resign in order to get Michael Grade to schedule the programme during early peak-time. “We were changing the dynamic of primetime television,” says Boyd. “Taking four young presenters, and not entertainment performers. Michael Grade was not convinced. He asked me, ‘are you sure these four young presenters can take on prime time television?’ I said, ‘yes’. It was quite a major change.” Similarly, the actor’s union, Equity, raised concerns that by focusing on the public, Game For A Laugh was depriving their members of gainful employment. Boyd brushed away this criticism, but recognised that “it was courageous of LWT and Michael Grade because they were going to take risks. And once it started to work – of course – it worked like a dream.”

It didn’t take long for Game For A Laugh to establish itself as a success, and while later series attained higher ratings, it was those early episodes that best defined the show in the public consciousness. In fact, one of the most famous stunts (in which a couple’s car is destroyed) occurred in the first ever episode. Similarly, the well remembered prank in which a housewife performed on a stage at Blazers of Windsor, appeared on only the second ever show. After the series’ debut in September 1981 the decline in popularity of The Generation Game (its direct competitor) over the remainder of that year was clear to see. Whereas, the new ITV series was to register as the channel’s sixth most popular programme in November, The Generation Game fell from being the BBC’s number one-rated show in September, to number nine just two months later. Game For A Laugh was achieving its primary objective – to beat the BBC.