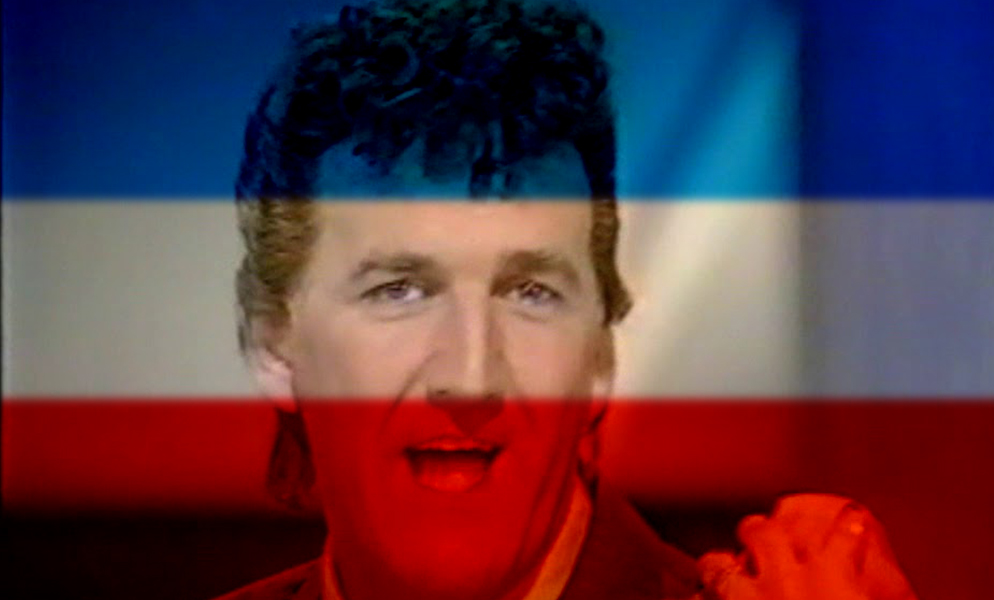 Come 1986 and, as per usual, ITV (now operating with the strap-line “It’s worth coming home to … ”) was playing host to the TV Times Top 10 Awards. And just to reinforce the sense of tradition that had built up around the ceremony there was to be at least one familiar winner, as for the eighth year running, Terry Wogan claimed the award for favourite male TV personality. “I don’t get blasé because they are the only television awards that mean anything, as they are made by the public itself,” he said. “The fact that Wogan is on BBC and TV Timesviewers have voted for me means that those who watch television are not bothered by barriers. I’ve found this reward quite gratifying this year because over the last few months, I’ve been the target of a fair amount of abuse in print.”

At the time his profile could have hardly been higher. His thrice-weekly chat show was at the heart of BBC1’s weekday schedules and crucial to controller Michael Grade’s plans to wrest viewers away from ITV.

One of the other famous faces in the running for an accolade at the TV Times Top 10 Awardswas comedian Russ Abbot. “He has been one of the great emerging forces in comedy in the last five years,”

remarked Wogan. The comedian (billed as the “hottest comedy property since Peter Sellers”)

had recently departed LWT and in May 1986 appeared in a well-received one-off special for the BBC. Claiming that the move to the corporation had given him a “whole new lease of life,”

“When the BBC approached me, I was highly flattered,” remembers Abbot. “Even David Bell at London Weekend at the time said: ‘there’s going to come a time when you’ll have to go to the BBC’. Because the BBC was, and still is, an institution …

“It has a great ability with overseas sales and world marketing and was respected throughout the world … I’d been very happy with ITV and London Weekend. But (the BBC) approached me … and the great thing was to do the Christmas specials … Because that slot on Christmas Day was the big number. That was the show of the year. That was the one that every family and everybody who wanted to see variety or light entertainment were all tuned in Christmas Day for  – and I got that slot … I look back with pride on that.”

Emboldened by an increased budget, Abbot mixed a number of new characters in with old favourites that had served him so well at LWT – again to some acclaim. Unlike The Goodies and Morecambe and Wise, Abbot’s act didn’t suffer as a result of the switch from one channel to another. His 1986 series reached up to 13 million viewers (his best performance in three years). Yet to some viewers there was something missing. The lower budget of the LWT years had imbued Russ Abbot’s Madhouse with a kind of anarchic sheen that now seemed lacking.

“The first thing to do with any artist is to place them with a compatible producer/director and I was very grateful for the fact that in John Bishop I had a most talented producer/director who brought together a really fine team of writers,” says the BBC’s Jim Moir, the man who masterminded Abbot’s move from ITV. “Additionally the creative design was quite stunning and, and made for a really glamorous, entertaining and above all funny Russ Abbott show, and that’s what we were able to do – it’s the talented people with whom we were able to surround him.”

Nevertheless, the transition was a success, and Abbot, pleased with his move, started making noises about plans for a TV sitcom.

Wogan and The Russ Abbot Show were but two of a raft of new, fiercely competitive programmes produced by the BBC. In the wake of Grade’s arrival the corporation’s audience share had risen from 40 per cent in 1984 to 47.5 per cent the following year. The success was attributable to a number of factors, but perhaps most important of all was the launch of twice-weekly soap opera EastEnders in February 1985. In the space of 10 months it had attracted audiences of up to 23.5 million viewers. Unsurprisingly there were moves afoot to find a drama of similar grit and (it was hoped) popular appeal to broadcast on Saturday evenings. Given that this new series was to premiere in the same week that Granada Television’s own hard-hitting weekend soap Albion Market (which was broadcast on Fridays and Sundays) was in its death throes, the notion of scheduling a realist drama at the weekends was something that was in the air.

BBC1’s Casualty was a bold, but calculated move. Mindful of the popularity of the BBC series, Angels (which had run successfully from 1975 to 1983), Michael Grade had apparently issued an edict that the BBC should produce another hospital drama. In addition, BBC1 had been running the occasional realist drama during Saturday evenings for the last few years, with series such as Paula Milne’s Driving Ambition (1984), and The Odd Job Man (1984) establishing that there was a relatively sizeable audience appetite. During 1986 the BBC produced Strike It Rich (a drama from the pens of Eric Paice and NJ Crisp that dealt with the entangled lives of a group of shareholders) and The Collectors, which appeared to all intents and purposes an attempt to establish a popular long-running ensemble series in the Angelsmould.

Centred round the activities of a group of custom officials based in the fictional south-coast port of Wrelling, the series promised “tales of intrigue, fraud and skulduggery”

Actor Michael Billington played Tom Gibbons in The Collectors. He had his doubts from the off: “I met with Producer Geraint Morris who had produced The Onedin Line after I had left, and who I had subsequently met socially, who suggested that Gibbons might be the better role,” he recalls. “I read it and thought that Gibbons was a bit ‘isolated’ but I thought it could be fixed … It was set in a customs Office, which was closer to ‘Royston Vasey’ [the fictional town in The League of Gentlemen television series] than Dover and had all the soap usuals. Snobby in-laws, old codgers, Italian ice cream vendors, horses, kids, and a sub plot concerning a pre-pubescent adultery … it was I think the first independent production to be taken in house by the BBC and I don’t think anyone knew who was really in control. Unfortunately, it came out as a hangover from the kind of stuffy product both the BBC and Yorkshire had had a lot of success with in the 70s.

“The customs officers were obsessed with procedure and triviality – like keeping a samples cupboard tidy, which had about as much excitement as the food purchasing department at Tescos! All done with acting at the level of a sitcom, with the exception of Peter McEnery who played Caines (‘Oven Chips’ to his friends) who was, in my view, magnificent and a joy to work with … The show was axed because it wasn’t very good. There was casual talk of a second series but I don’t think anyone really believed it. A bit like the radio operator on The Titanic!”

Next Monday: A slightly pretentious manifesto