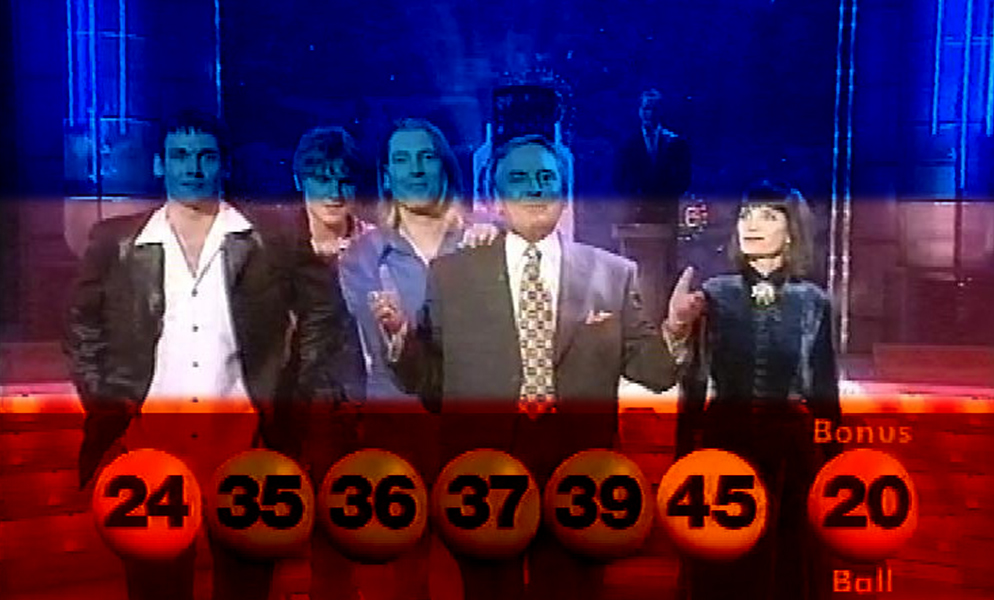 Compared to ITV’s hapless attempts at finding a new hit in 1995 and 1996, the BBC was the very model of consistency – they had enough good performers to rely on throughout the year. Only one new programme was launched in the same period, which got nowhere near the same sort of flack as Man O Man or The Shane Richie Experience. That said, it wasn’t substantially better.

The new show in May 1996 was an attempt to replicate the success of Big Break, which had been a reliable performer for five years. As such the same production team was engaged, and the new show was, basically, identical. Full Swing was based around golf and like Big Break had another old school comedian as master of ceremonies – Jimmy Tarbuck. Again the contestants were teamed with celebrities, there were trick shot-style games for consolation prizes, and even a similarly dreadful theme tune. Yet while Big Break had been a hit, Full Swing’s contrived format was less impressive – anyone could see that it was simply an attempt to ape the success of a previous show. Despite an appeal for future contestants on every programme, Full Swing remained a one-series curio, and most viewers probably failed to even notice it had begun.

Though the rest of the BBC1 Saturday schedule looked very similar to previous years, there were small changes afoot within the actual programmes. The most obvious came on The National Lottery Live as Anthea Turner departed in April 1996. The previous 18 months had seen Turner transform from Blue Peter graduate to one of the most famous people in Britain, and she was now dominating proceedings from beginning to end. With this in mind, perhaps, the BBC decided her replacements would only be engaged on a short-term basis, alternating every few months. However the first replacement made the show their own and finally made the series worth watching even if you didn’t have a ticket.

That’s because the new host was Bob Monkhouse – about as different to Turner as you can get. Monkhouse started each episode with a self-written topical stand-up routine. Famously, one week the autocue collapsed immediately before he launched into his spiel and he improvised a completely new monologue on the spot; apparently without the production team noticing. Monkhouse’s slick patter was evident in a new catchphrase developed for the occasion – “I know I’m a sinner, but make me a winner!” – and while Mystic Meg and the unenlightening interviews with stupefied former winners remained, Monkhouse sent them both up; testament to his ability in gleaning comedy from the most unpromising of formats. So, after being booked for nine weeks, the great man made many appearances over the following two years. One of Bob’s regular targets was the straight-laced drawmaster John Willan, whose role was to start up the machine for each show. Monkhouse later said “He’s not a man to lavish charm his charm upon anyone, least of all the television team,” and claimed he’d asked a member of the production team exactly what Willan’s role was on the series. The response – “He gives us our spirit of unity; we’d all like to strangle him.”

Monkhouse’s (and Willan’s) finest hour surely came in the draw of 30 November 1996, when after the usual elaborate build-up to the big event, it was noticed that the machine was not spinning around. Alan Dedicoat, filling time, announced “Bob Monkhouse will now ask John Willan exactly what will be happening!” and Bob took him at his word asking, “John Willan, exactly what will be happening?”. What actually did happen was that the draw was delayed for 50 minutes while Casualty was bunged on (the problem was solved almost immediately, when they realised the door to the machine hadn’t been closed) and it was Bob’s job to entertain the waiting studio audience.

Of course Bob had the experience to deal with this sort of thing. In between his first two stints on the lottery draw – Dale Winton hosted proceedings in the meantime, relishing the gig and bringing bags of enthusiasm to the role – Monkhouse had fronted the second series of his Saturday night stand-up showcase Bob Monkhouse On The Spot. Here the format was basically one big excuse for Bob to show off his mastery of the art, with material based on the week’s news and a regular concluding set-piece where Bob was challenged to improvise his way from one subject to another. Bob claimed the series generated “the best reviews of my life,” from papers as diverse as The Times (“genuinely funny”), The Guardian (“a delight”) and The Sun (“He is our sharpest stand-up comedian”). A shame, then, that the second series would be the last.

The main attraction of BBC1’s Saturday night remained Noel’s House Party, which celebrated its 100th edition in March 1996. However it was fast becoming apparent that the series had seen better days. New producer Guy Freeman had made a number of changes to the format, most notably dropping the familiar dancing trestle tables titles and howling guitar-based theme tune, replacing them with shots of a genuine stately home and an anonymous dance track. The set also changed, looking less like a house and more like a television studio, including a space for bands to perform their latest singles. Charlton Heston showed up to plug a film, something that had never previously happened. Some of the more familiar features were also subtly changed – NTV now appeared to be more about showing off the latest technology with the victim reduced to a walk-on role, while the Gotchas moved over to the USA to hit American celebrities; though these almost always fell flat as Noel had to explain what a Gotcha actually was during the reveal.

The most radical departure came in March 1997 when the programme left Television Centre for a week and relocated to New York. The show was set in an “apartment” and most of the familiar features made the trip – along with David Hasselhoff singing live – but it failed to appeal to the American studio audience, and therefore seemed even flatter back home. Viewing figures were declining, but with a lack of any other ideas for a Saturday evening, it was continually recommissioned.

On the other side, at least ITV wasn’t repeating the problems it had endured in the previous 12 months. So Gladiators, Blind Date and Family Fortunes remained in the schedules every Saturday for months on end, with You Bet! and Stars In Their Eyes replacing the latter two respectively in the new year. None of them were getting any younger, nor were attracting new audiences, but clearly ITV had decided that it needed a hit, any hit, on a Saturday night. Barrymore returned as well, though this time in April 1997, after the House Party had gone off for the summer.

Indeed the only real change came earlier in the evening – the return of the imported series. Previously, shows such as The A-Team and Buck Rogers had been absolute fixtures, but there were few similar series in the mid-90s. The only US programmes that had really been a hit were The New Adventures of Superman on the BBC, and Baywatch on ITV. However in 1996, two occurrences launched a second wind for the import. The first was the success of The X Files, having moved from a cult series on BBC2 to a genuine peak-time hit on BBC1, which got the broadcasters searching the States for equally successful hokum to screen.

The second was the arrival of The Simpsons to BBC1 in November 1996 – over six years since the legendary series began on Sky One. A much-hyped acquisition, it received an unusual slot; Saturdays at 5.30pm. It was family viewing at its best, though it could have been considered too early for really big audiences. As a spoiler, ITV deployed its latest American acquisition, the unremarkable Sabrina The Teenage Witch, at exactly the same time – surely the only time two American sitcoms had debuted against each other on British TV. The Simpsons won the first head-to-head, but not by as much as could have been expected, and the five million or so who tuned into the residents of Springfield was hardly any different to the audience that had watched the previous programme in that slot; the slightly less expensive Dad’s Army. Within a few weeks, the unimaginable had happened, as Sabrina started to win the slot.

In February, BBC1 abruptly dropped The Simpsons from its Saturday evening slot and brought Dad’s Army back in its place. A month later it arrived at BBC2 on weekday evenings and went on to be a huge success – did this suggest it was badly scheduled in the first place, or that it was never going to be a mainstream hit? Maybe the weak, early episodes that BBC1 had been lumbered with screening were the problem; certainly those with satellite receivers had seen them dozens of times. Meanwhile, Sabrina was joined on Saturday evening ITV with the equally teen-friendly Clueless and X Files-esque Early Edition; three imports in a row representing a huge departure for the commercial channel. None of them lasted very long in this slot, though – Early Edition was dropped after a matter of weeks and moved to early afternoon, while Clueless and even the triumphant Sabrina were both classed as children’s programmes and moved to Children’s ITV for their second series. The flowering of imports soon withered, with both Superman and Baywatch running out of steam in 1997. Though we can assign the moment TV fell out of love with imports when ITV paid over a million pounds an episode for X Files creator Chris Carter’s follow-up series Millennium, only to discover it was so bleak (based around a man who could read the minds of serial killers) it couldn’t even be shown before 10pm.

Instead the broadcasters decided that they could produce their own light-hearted family dramas. When Casualty ended its run in March 1997, replacing it was a new series, Crime Traveller. From the same production team as the successful Bugs, Michael French – then incredibly popular having just left EastEnders – starred as a time-travelling detective. Creator Anthony Horowitz saw his show as part of a new trend; “I think there is a move into fantasy television. Realism has gone as far as it can; it has backed itself into a corner. After so many hospital dramas and detective dramas, everybody is a little battle-weary of the crusty side of life.” However the public failed to agree, as the “tongue in cheek” series was considered basically too stupid by an audience who were used to Casualty in its place.

Next Monday: The worst programme currently on terrestrial television