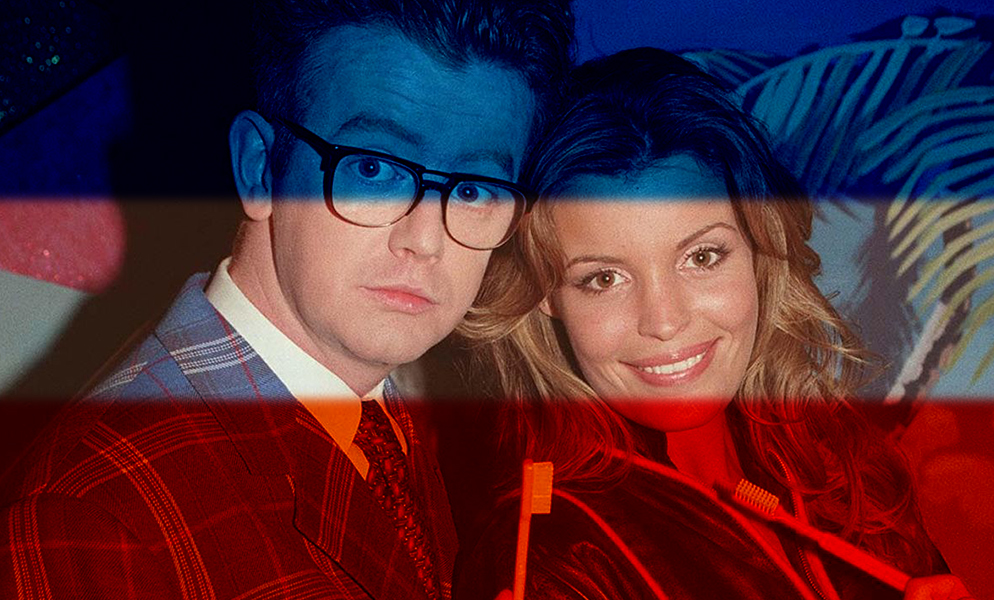 The pilot for Don’t Forget Your Toothbrush taught Chris Evans and Will Macdonald one very clear lesson: “We had a great premise – which was to get a bunch of people into a studio – and we very quickly realised that the last thing you want to do to those people is present some of your jokes, your stupid little jokes which you think are very funny, but which mean absolutely nothing to these people who are over-excited in a studio,” says Macdonald. “We very quickly realised what you’ve got is a bunch of people in a room who – quite frankly if you gave them a litre of gin ecstasy and crack cocaine couldn’t be more excited – and so therefore you’ve got to have fun with them. Playing with them is your real gold.  That’s what we realised and that just made the whole show.

“So we got rid of all the stupid sketches, got rid of me because I was meaningless, got rid of all of the stuff that was sort of irrelevant to the procedure and realised the procedure was holiday, superstar guests, Jools Holland playing and then just basically play with the audience.   The moment we realised it was working was on the second pilot where we brought a girl onto stage and we asked her to list 10 things that were in her bedroom that morning when she left and she just listed them and we said, ‘well how do we know you’re not lying?’”.  The answer was to actually bring her bedroom onto the stage. “She was so surprised she actually fell over because the floor came round and made her fall over. But the open-jawed reaction and her falling over was the moment we realised I think that we’d understood Don’t Forget Your Toothbrush. I think that was quite a defining moment for the show.”

One other factor that shaped the second pilot, was the introduction, behind the scenes, of William G Stewart. At the time he was best known as the no-nonsense, strait-laced frontman of the afternoon quiz Fifteen To One, but he had many years of experience behind the camera. Most notably, in the 1980s, with The Price Is Right. Now a decade on, he was drafted in to sort out the unwieldy aspects of Toothbrush.

“I think what we learnt off dear old William G was how to do game shows in a traditional sense, in as much as when you stand next to a contestant, put your arm round them, bring them close to you, make them feel part of it and the way it should look on camera,” says Macdonald. “I think the truth is that after the first pilot we knew what was wrong and we knew how to fix it.

“I think history, such as it is, portrays that dear old Bill had an important part in rescuing Don’t Forget your Toothbrush and that wasn’t the case at all. He came in and provided a guiding hand and some experience of shows such as The Price is Right.   But I think that sometimes his role is slightly overstated.”

The second pilot was so successful that it was actually transmitted as part of the first series. Don’t Forget Your Toothbrush finally launched on Saturday 12 February 1994 at 10pm. In many respects it was similar to Noel’s House Party (a series Evans confessed to being a huge fan of). Each week there would be studio games with unsuspecting members of the audience, a musical guest who would sing a few songs accompanied by a band led by Jools Holland, and that week’s star turn who would have to participate in a quiz against one of their biggest fans. There were various other daft items, often under the guise of ‘Fun For You At Home’ and usually consisting of stunts or pointless brainteasers. All the while, the audience were encouraged to sing and cheer along, and become part of the show.

This all led up to the main game, played in the final 10 minutes, where members of the audience were plucked at random to take part in the ‘Light Your Lemon’ quiz. Each week, two destinations would be offered – one somewhere exotic such as Barbados, the other – closer to home – such as Blackpool. The contestants would have to answer questions, and if they got five right they’d be off on the exotic holiday right there and then. If they got five wrong, though, they’d be off to the dowdy seaside resort, and there’d be a viewer on the telephone who’d try and win the star prize instead (memorably, one week the home viewer had been watching the other side when he was phoned up). This made for exciting television, but never more so than in the penultimate episode of the first series, when the competing couple weren’t just playing for a holiday for themselves, but the entire audience. As promised, the 200-strong crowd went on to enjoy a week in Euro Disney – one of the biggest prizes ever given away on British television.

Soon, everyone was talking about Don’t Forget Your Toothbrush. In fact, the programme had been specifically created so that the viewing figures increased, via word of mouth. Matthew Freud was Evans’ public relations manager at the time, and later explained how the show was marketed – “We spent about three or four hours late one night talking about how a programme can basically market itself. The concept emerged of a word-of-mouth check on each show, the idea of looking at a programme after you’d done it and saying not, ‘Was it a great show?’, but ‘Are there one, two, three, four things people will be talking about?’ In the States they call them watercooler moments … quite often they’re put in gratuitously, and effectively they’re what allows you to do your own marketing. If two million people have watched your show, and they then go and talk about it rather than just passively viewing, then the audience will grow.”

This was clearly the case, given the extraordinary amount of press garnered by a show broadcast late at night on Channel Four. It didn’t even make it into C4’s own top ten until the middle of the run, and the three million or so watching was nothing compared to the nearer 13 million tuning in for Blind Date. But of those 13 million, most probably couldn’t remember what had happened the minute the show had finished. Toothbrush viewers remembered the time a member of the audience was offered a random choice of three cars to and ended up going home with Evans’ own Ferrari. They also remembered the regular segment when the show cut to a camera shot of a street and its residents were invited to flash their lights on and off to be chosen to win cash prizes – the sight of whole neighbourhoods joining in said much about the power of the show.

Don’t Forget Your Toothbrush went on to win BAFTAs and the prestigious Golden Rose of Montreux, and the concept was sold to dozens of broadcasters around the world – making Evans, who produced the show through his own company and owned the format, a substantial amount of money. But despite its impact, the series was short-lived – almost exactly 12 months later, the show ended after two series. “There were two reasons it didn’t go beyond a second series,” says Macdonald. “First of all it was a bloody hard show to make because we tried to make it different every week. Every Monday morning we had a blank sheet of paper for that Saturday and we were ticking off all the mad things that we could think of. So it was just becoming increasingly hard to beat ourselves. When we sent the whole audience away on holiday the next week we thought ‘what do we do now’?

“The second thing was Chris’s persona which wasn’t really him. He was playing a part and over-selling and he didn’t really enjoy it, which again is something you can’t get away with for too long.  After two series it was a bit over the top. We never set out to be ironic, but I think he was becoming an ironic character take on a Saturday night game show.”

Evans signed up to Radio 1 to present their breakfast show. Oddly, the BBC then bought the Toothbrush format, and went as far as piloting their own version with MTV presenter Ray Cokes (although Dale Winton was also considered as a possible host), but it never made it onto the screen. It’s hard to see how it would have succeeded without the man who dominated the show, but the fact the Beeb were willing to go ahead with a new version proves how successful the format and the execution was deemed to be.

Next Monday: A reliable tent pole for Saturday evenings