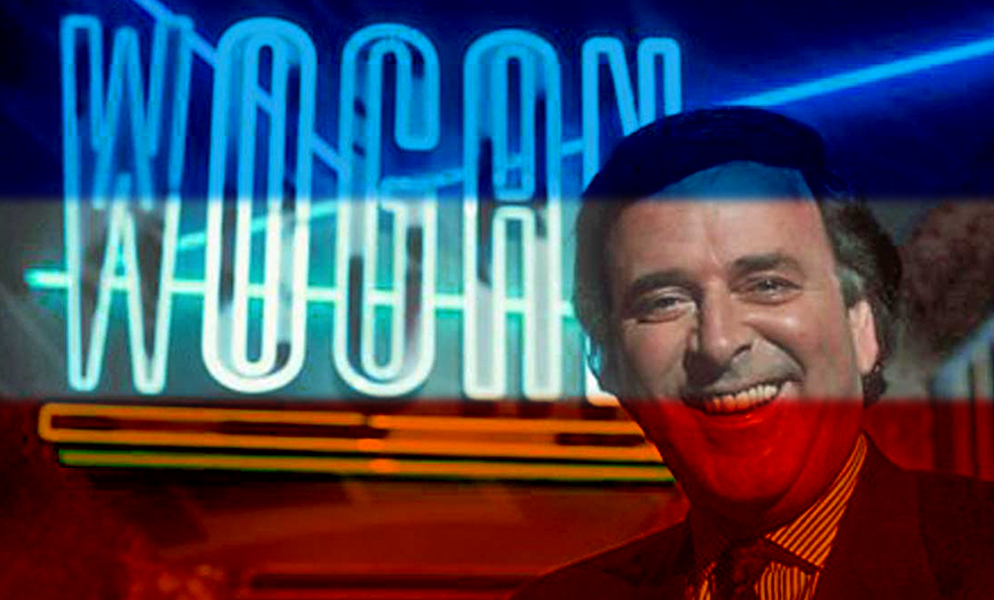 For Cilla, the breakthrough was immediate. Not only would Surprise Surprise deliver her substantial new audiences (up to 16 million viewers would tune in each Sunday night), but it proved to LWT, and in particular John Birt and Alan Boyd, that Black was a formidable talent. Wogan, meanwhile was already a ubiquitous BBC presence. However, his own Saturday night BBC1 chat show was a new proposition. Not that this was his first attempt. In 1974 he interviewed an eclectic bunch of celebrities including Rolf Harris, Mary Quant and Patrick Moore for his Radio 4 chat show Wogan’s World. In the 1970s Come Dancing and later The Eurovision Song Contest and Blankety Blank established him as a television personality. 1980’s What’s On Wogan (a short-lived live show produced by Alan Boyd ) suggested the BBC was keen to deploy Wogan in their Saturday night schedules.

1981’s You Must Be Joking is now only vaguely remembered by its host. It was described in Radio Times as a “comedy game show about hoaxes, spoofs, put ons and tall stories. Each week two teams of contestants, as well as all the family at home, will find out just how gullible they really are by judging the authenticity of obscure objects, fractured facts, faulty films and the surprising secrets of a star personality”. Although scheduled in Saturday primetime, it failed to make an impact. Unlike Noel Edmonds or Jeremy Beadle, Terry Wogan’s natural medium was not anchoring a fast-moving, complex, thrills and spills Saturday night television show, he was better suited to laid back formats (even managing to turn a complicated programme such as Children In Need into what seems like a relatively informal affair).

Having lost a well-loved figure to the newly formed TV-am, the BBC was keen to plug the Saturday night gap created by Michael Parkinson’s defection. From May 1982, Wogan had already been co-presenting (with Paula Yates) his own chat show. By all accounts, it had been a big hit (James Cameron in theDaily Express described it as “another instant triumph”.) “It’s hard to believe now, after the contumely and abuse of the latter days of Wogan in the 1990s,“ recalls Wogan, “but the press were all for me then: ‘Give him his own chat-show with all the old Parkinson trimmings, and just watch the redoubtable Terry take off!’” While happy to assume the Parkinson slot, Terry was keen to make his own mark. “My show will be different from Parkinson’s because I am different from Parkinson,” he asserted in 1983. “Parkinson interviews. What I want is conversation. He is a journalist by training. I’ve no journalistic training. I shall act as more as a catalyst and not give my guest a hard ride. I’d like to get them away from their routine. If you let them, they’ll give you their chat-show routine which they’ve done for everyone else.”

Beginning in January 1983, by the end of its first series in April, Wogan was attracting 9.1 million viewers, making it the ninth most watched BBC programme of that month. While in part attributable to some excellent guests, such as the aforementioned Cilla Black and Larry Hagman, Wogan had carved himself a special place in the public consciousness. Recorded on a Friday evening and carefully edited by producer/director Marcus Plantin, Wogan wanted to preserve the “live quality”” of the programme, insisting upon keeping in any embarrassing pauses. However, certain interviewees (such as Freddie Starr) required some editorial pruning. All in all, it was the calibre of the guests that dictated the success of each edition. For example, Dallas stars such as Victoria Principal helped draw in 12 million Saturday night viewers.

The series continued in satisfactory fashion for the next year or so. In 1985, having managed the introduction of the BBC’s new soap EastEnders into the schedules, Bill Cotton, the BBC’s managing director of television services, wanted to move Wogan to a week day slot. “Originally my idea had been that Terry should do a late-night show along the lines of that hosted by Johnny Carson in the United States, but Terry preferred an earlier slot which had more chance of attracting his large Radio 2 morning-programme audience.” BBC1 controller Michael Grade has a different recollection. “Bill Cotton was keen to use Terry Wogan … three nights a week at the end of the evening,” he explains. “I just didn’t see how I could carve out the necessary space because I was constrained by the position of the nine o’clock news which was immovable. The programme that followed it was the main entertainment of the late evening and might be a drama, a film, a comedy or an American show. All these programmes were of different lengths, so I couldn’t offer a fixed starting time for Woganat the end of the evening … I was also worried that many of Terry’s natural viewers would be in bed by the time we screened it late at night … I therefore decided to put out Wogan at seven o’clock on Mondays, Wednesdays, and Fridays.”

“A thrice-weekly show would mean me giving up the daily radio show, and of course the Saturday night chat-show,” remembers Wogan. “It was a big decision. I could sit tight on the success of both these shows, and go on forever, or as long as anybody goes in this strange game. I did not have to take the risk, I was sitting pretty on top of the ratings and the popularity polls”. In the end, Wogan ran for seven-and-a-half years in its thrice-weekly format and attracted an average audience of 8 million viewers. “Wogan did not quite match up to my expectations for it,” rues Grade. “Though undoubtedly a success, it never achieved importance as one of those rare programmes you must catch or your day will not be complete. It should have been the show everyone rushed home to watch, but it never created that kind of buzz … I knew we were in trouble the first time I called into the production office. On the wall was a huge blackboard with all the shows for the following two months listed, and beneath each date a full complement of guests were set out, each booked in advance. The show was set in concrete.”

In 1992 Wogan was cancelled to make way for the BBC’s ill-fated soap opera Eldorado. As the thrice-weekly Woganwrapped up, Terry would make his way back to Saturday evenings. By that time he would find himself competing against an unstoppable force. Back in 1983 though, things were just beginning to happen for Michael Barrymore.

Next Monday: I thought it might be terrible and I wouldn’t enjoy it at all