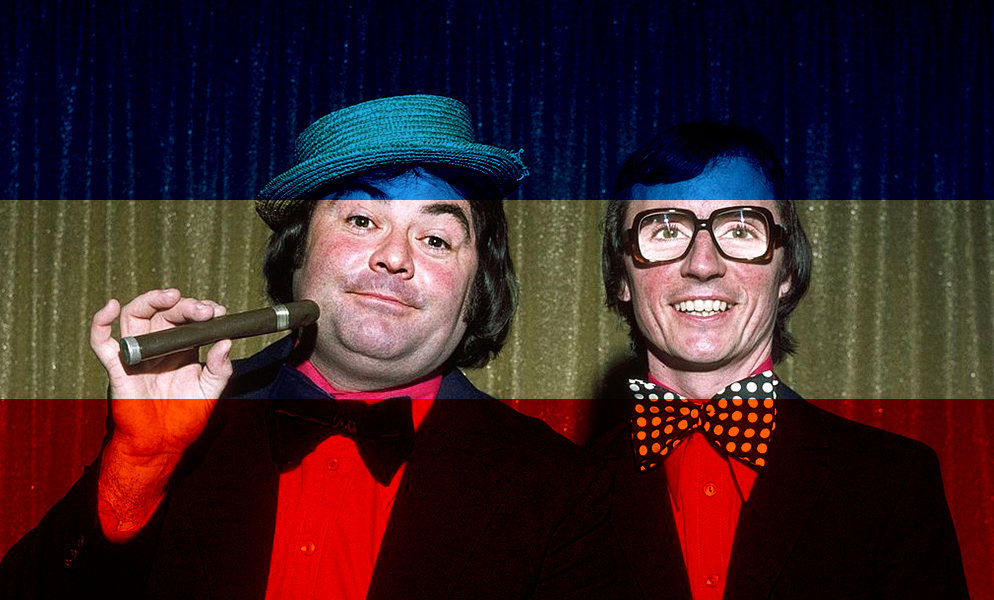 Yorkshire Television did its own bit for new comic talent on Saturday nights with the creation, in June 1980 of Rock With Laughter. Described as “a rapid succession of songs, impressions, daft jokes and weird impressions,” and “one of the fastest moving programmes around,” it adopted a style similar to Granada Television’s The Comedians. “Producer Mike Goddard recorded all the acts for the six shows in just five days,” recalled TV Times, “chopping his tape into segments of a few minutes each and weaving them together to make each programme. The acts are almost all unknowns, discovered on a six-week search of clubs and cabarets. They glory in such names as Bobby Sox – he’s a sort of rock ‘n’ roll Liberace, apparently – and Phil Cool. All mix comedy or impressions with their music. There are no stars as such, but Goddard does say to watch for a girl named Ines Burns, from Liverpool, who was discovered in a working men’s club singing with her husband’s band.

“‘She could be something quite special,’ says Goddard. ‘Wait till you see her impressions of people such as Kate Bush, Olivia Newton-John, Debbie Harry and Hilda Ogden.’ Some singer, that Hilda Ogden … ”

Much like Search For A Star winner Dave Wolfe, Phil Cool was to find early television exposure critical in establishing a viable career, and throughout 1980 and 1981, Cool chose to bill himself as a “Great New Comedy Star from TV’s Rock with Laughter“. A turn at Jasper Carrott’s Boggery Folk Club in March 1981 further cemented his reputation, and gained him the patronage of the Brummie comedian. This was the beginning of a long association, culminating in the creation of Cool’s own television series in 1985.

Not all those who appeared on Rock With Laughter could be expected to achieve such levels of fame. Bobby Sox (with the Prize Guys) continued to gig in and around Liverpool throughout the 1980s (eventually amalgamating with other local acts to form the Jive Mothers), while the hotly tipped Ines Burns failed to meet the high expectations that Goddard had for her and disappeared from public gaze.

If you were trying to identify the comedians that made the most of 1980 though, four candidates stand out. Winning Opportunity Knocks in 1971 had opened doors for Cyril Mead (born in Blackpool in 1942) and Eddie McGinnis (born in Glasgow, also in 1942). Here was yet another duo that had begun their career as a singing double act. Performing on the Manchester club scene they spent many years paying their dues before stardom beckoned (once having to pay admission while topping the bill). As Little and Large, they developed an act in which Mead (for he was Syd Little) attempted to perform a musical number while McGinnis (under the nom-de-plume Eddie Large) provided comic interruptions. One series for Thames Television in 1976, followed by a Christmas special for the BBC the following year resulted in Little and Large being awarded their own Saturday night early evening television show on BBC1.

Pleased to see them back in February 1980 for a new series, Radio Times was misty eyed as it attempted to describe their unique act. “Eddie is bursting with madcap energy. He rushes all over the place doing his comedy impressions. Rod Stewart singing ‘If you want my body … ’ with appropriate movements. Mrs Thatcher, Kate Bush swooping and soaring. George and Mildred. Prince Philip. The Flowerpot Men. Joe Gormley. Mork. Top Cat. Benny from Crossroads. Hylda Baker. The Fonz. Miss Piggy and Kermit. Demis Roussos. Only a snatch of each, a characteristic line or two with a joke twisted into it … Syd meanwhile mostly just stands there with his acoustic guitar acting rather gormless and put-upon, his eyes blank behind big thick specs. For the last 20 minutes he’s been attempting to sing ‘Mull of Kintyre’. Eddie constantly interrupts with his impersonations”. There was little doubt that Little and Large were formulaic, but they were making the kind of television that people wanted to watch on Saturday evenings. They had the 19th most popular programme of 1980 with 18.1 million viewers tuning in.

“Double acts have to send out a message about what they do,” believes seasoned producer and director Michael Leggo, ”and Little and Large, who were very successful for a number of years were silly and juvenile. I don’t mean that in an unkind way, but it was ‘kiddie’ humour.”

While Little and Large’s television career was getting under way, their close rivals, Cannon and Ball were getting over a shaky start. Having suffered at the hands of Bruce Forsyth’s Big Night, their own series appeared to be a just reward. Scheduled for transmission at the end of 1979, the duo could hardly believe their luck. Having watched their carefully prepared sketches pulled from show after show of the Forsyth series, they were determined to remain sceptical. “Tommy and I stayed calm,” recalls Ball. “When we were invited to discuss the length of the series, the writers who would help provide the material, and the subject of money, we began to feel it might actually come off after all. David Bell, a brilliant light entertainment producer, was hired to put the show together for us, and an idea started to become a reality”. This, of course was the same David Bell who had upset Freddie Starr during the production of Freddie Starr’s Variety Madhouse. Happily though, his experience with Cannon and Ball was far more productive. “The final realisation that this was not a dream came when we were told that our own theme song was being written. This was a great moment – having spent our lives singing other people’s material, this one was just for us … and ‘Together We’ll Be Ok’ became our theme tune for ever more”.

However, fate intervened yet again as the twosome’s first run was scheduled slap bang in the middle of the ACTT strike that blighted ITV in 1979. When the series was eventually broadcast the duo found themselves catapulted into the spotlight. “We did the north pier in Blackpool and that’s when suddenly we realised our lives had changed,” says Cannon. “During the rehearsal, the queue for tickets was round the north pier and right the way down the seafront.” Although originally compliant to the conventions of television recording, the boys grew into their craft with some speed and began to exert more influence. “Suddenly then the television cameras eased off and started to follow us a little instead of having to go to our marks,”  remembers Cannon.

By 1980 (in a Friday night slot for the only time in their 12-year run) Cannon and Ball were able to command audiences of up to 13.5 million viewers. That December, TV Times reflected upon the duo’s meteoric rise. “The explosive year for Tommy Cannon and Bobby Ball goes out, aptly, with a bang on Saturday: Cannon and Ball For Christmas marks the end of 12 months which have seen the arrival of the north country duo as superstars. After 18 years of solid club land success, 1980 was the year they launched their first (sic) seven-week series for LWT; broke Blackpool box office records (held since 1962 by Bruce Forsyth) for their summer season at the north pier and performed to capacity audiences at just about every club and concert they worked”.

Yet all was not wine and roses. The duo found themselves at number four in ITV viewers list of most hated television programmes for 1980. For the record, The Nesbitts Are Coming (an odd semi-musical situation comedy about a family of unruly roving crooks), Russ Abbot’s Madhouse and Crossroads were all that stood between Cannon and Ball and ultimate ignominy.

In 1983 Cannon and Ball were considered big enough to justify their own motion picture. The Boys In Blue is a pretty unmemorable remake of a Will Hay film and bears the immortal tagline “A really blue movie … ” But it is a good indication of how popular Cannon and Ball were during the early 1980s and it’s one of the few career achievements that sets the duo apart from the aforementioned Little and Large. There a number of parallels between the two duos, not least that both came from a background of northern working men’s clubs, both appeared on Opportunity Knocks and both began their respective run of Saturday night television series in 1978. Perhaps most importantly though, the template created by these two double acts would shape mass appeal TV comedy throughout the decade.