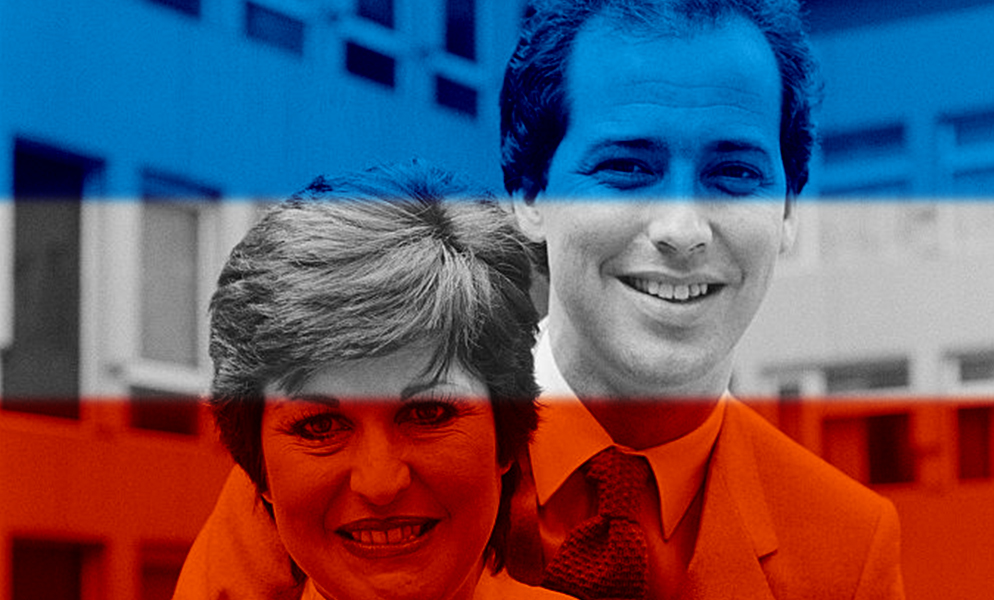 Born in Bermondsey on May 4, 1952, the young Michael Barrymore fell in love with Norman Wisdom films and, from the age of eight, set his heart on making people laugh. An appearance on New Faces in the mid-1970s confirmed his burgeoning talent (he won it with a score of 95 out of 100). Central to his act was a series of impressions that he performed upside down. “It started when I began taking off the Australians,” he explains. Such humour lent itself well to the zany ITV comedy series Russ Abbot’s Saturday Madhouse and in 1981 Barrymore became part of the team bringing to the mix of eclectic characters his own two creations: Gordon Bluey and The Weathermen.

“As a virtually inexperienced performer, I thought it was fantastic that I was asked to join the team,” he says. “It certainly helped me to develop, to relate to an audience and learn about the workings of television. Russ Abbot was marvellous, too, and very generous in letting me and the other ‘inmates’ of the Madhouse have a fair share of the limelight”. Growing in confidence, it was around this time that Barrymore’s stage act became more anarchic and spontaneous. It was not unusual for him to stop a performance if he saw a member of the audience heading for the bathroom, and cajole them into coming up on stage instead.

Appearances during 1982 on Blankety Blank, Give Us a Clue and The Little and Large Show further bolstered his confidence and profile. Increasingly, Barrymore was creating a name for himself out with the Madhouse fold (a feat that would repeated two years later by fellow inmates Dustin Gee and Les Dennis) and by November 1982, Barrymore was offered his own series. Thames Television’s Philip Jones had been impressed by the comedian’s performances and saw within him an entertainer in the mould of Bruce Forsyth (who also enjoyed humorous, albeit slightly barbed exchanges with members of his audience). “I really believe in him as a face of the future,” he confided and offered Barrymore his own series.

Michael Barrymore began on 28 April 1983. The six-parter consisted mainly of comedy sketches featuring Barrymore and co-star Nicholas Lyndhurst. While Barrymore’s biographers Phil Taylor and Paul Nicholas claimed the series was a success, this wasn’t true – on television at least – Barrymore worked best when appearing on game shows or other essentially non-comedic formats (he would not get another chance at his own comedy show for four years). Programmes such as Blankety Blank or Give Us a Clue were prime fodder for Barrymore’s particular brand of humorous subversion. It seemed inevitable that at some point he be put at the helm of a game show of his very own.

Not all Saturday night television hosts have lasted the course since 1983 and some of the celebrities occupying prime positions in that year’s Saturday night schedule, seem in retrospect, unusual. Yorkshire Television’s Just Amazing! was originally broadcast on Saturday nights, before later moving to Sundays. The show was a hybrid of the BBC’s Record Breakers and LWT’s Game For A Laugh(although it was nominally based on an American series). The original presenting trio of Barry Sheene, Jan Ravens and Kenny Lynch, made for an odd combination, with Ravens in particular, lacking the cheery disposition required to present Saturday night light entertainment on ITV (she was later replaced by Suzanne Danielle). The inclusion of Sheene, had little to do with his presenting ability. “When they asked me to do Just Amazing!, I wasn’t sure,” recalls the motor cyclist. “I thought it might be terrible and I wouldn’t enjoy it at all. But we all ended up having lots of laughs.”

The series stuck close to the mould established by Game For A Laugh,with each presenter getting to preside over a studio-based or pre-filmed item. Unlike Game For A Laugh though (which generated all of its own material) Just Amazing! also featured archive or foreign footage of stunts and daring activities. “There are only two rules in Just Amazing!,” commented series producer John Fanshawe. “All the stunts have to be genuine, and we don’t feature anything where people could get killed. Or at least we do on only one occasion but it happened so long ago – in 1912 – that we don’t feel it will offend viewers.”

The first episode featured a surfing rabbit, a regurgitator (apparently the first genuine one since 1946), a man who attempted to fly across the river in a rocket-fuelled car; and a skydiver who filmed his own descent, including the moment when both of his parachutes failed to deploy. The series was popular without ever becoming a proper hit. It lacked Game For A Laugh’s ability to combine comic and exciting items, and the chemistry between the presenters never quite worked. Just Amazing! proved that without the magic touch of an Alan Boyd, or Jeremy Beadle, a potentially promising programme format could never fulfil its true potential.