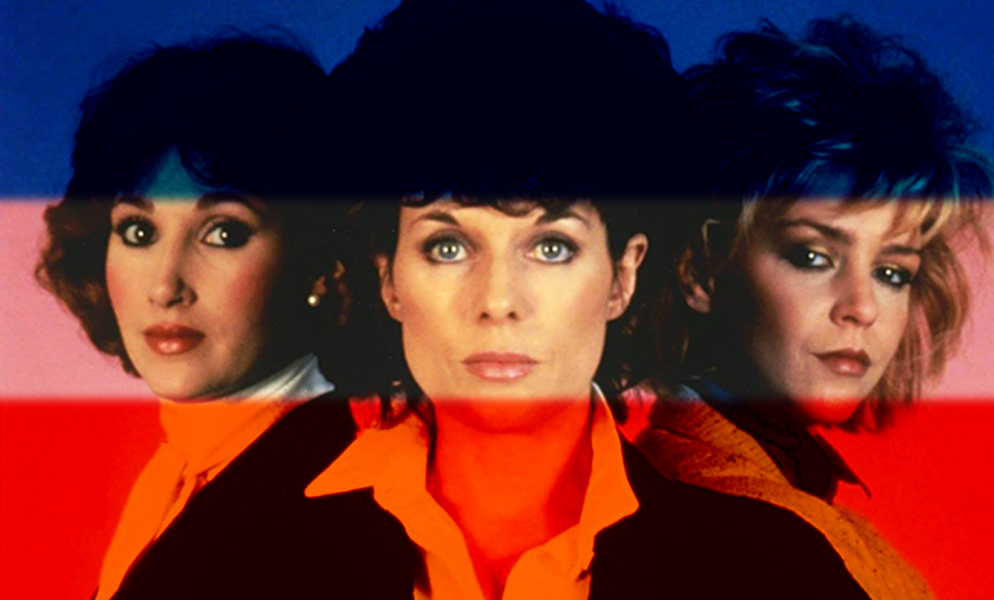 As the new age of ITV co-operation started to bear fruit in 1984, further promises were made. Granada, still resistant to Birt’s demands to move an episode of Coronation Street to Friday nights, did at least pledge to produce a new soap opera that could be used to kickstart the weekend schedules. Albion Market was slated to appear in 1985 and to Birt sounded like the perfect solution; playing on Fridays and Sundays all the signs were that the series would be a ratings tonic for ITV’s weekend schedules.

The follow through of new programmes, and in particular dramas offered up some intriguing new Saturday night offerings, as well as the return of some old favourites. The final series of LWT’sThe Gentle Touch was keen to retain the toughness that won the programme much acclaim. “There is a new hard edge to The Gentle Touch when it returns to ITV this Saturday,” reported the TV Times in 1984. “Jill Gascoigne back on duty for her fifth year as Det Insp Maggie Forbes, says the series ‘has got tougher, and so has Maggie’”. The previous run had concluded with Forbes being caught up in a grenade explosion. As a result, this new series intended to focus on how the experience had impacted the DI, making her an even more brittle character. On the face of it, such a tough drama seemed out of place on television’s most frivolous night of the week.

Yet it wasn’t only the series’ hard demeanour that set it aside from the norm, its willingness to tackle important contemporary issues endeared it to a wide audience. One reviewer was moved to comment, “intriguingly, it is what feminist critic B. Ruby Rich would have called ‘projectile’: A male writer, Terence Feely, develops a female character, Maggie Forbes, thus spreading false concepts on the nature of womanhood and confirming male prejudices of women”. It is difficult to think of many other contemporary, popular Saturday night dramas that would draw such an observation from a critic. Nonetheless, the popularity of The Gentle Touch continued unabated throughout its fifth year with crowds of people turning up to location shoots to chant “Maggie, Maggie” at Gascoigne, while 14.1 million viewers tuned in to watch ‘Exit Laughing’ (the final episode of the series), making The Gentle Touch the second most watched programme of the week. This wasn’t entirely unprecedented. In 1982 it had secured the second highest ratings ever achieved for an LWT drama with 18.1 million viewers.

Given such success, it is strange that LWT chose to abandon the format and allow TVS the opportunity to include the character of Maggie Forbes in their new action show, CATS Eyes. Perhaps, Forbes’ fate was entwined within the new relationship fostering between the two companies.

Meanwhile, in the same week the final series of The Gentle Touch started broadcasting, the BBC’s own female cop show Juliet Bravo found its way back to Saturday night television screens, also for a fifth time. With Anna Carteret now assuming the lead role, it performed admirably, surpassing even The Gentle Touch’s own efforts by achieving 14.2 million viewers for the 24 November episode, ‘Resolution’. Buoyed by the fact drama still seemed to have a place on Saturday nights, and perhaps attempting to find an elusive mainstream hit that would not attract the ire of politicians and critics, the BBC produced a number of new Saturday evening dramas in 1984.

Driving Ambition came from the pen of Juliet Bravo writer Paula Milne. She would later go on to produce a number of respected television dramas such as Die Kinder (1990), The Politician’s Wife (1995)and The Fragile Heart (1996), and would in 2001 be described by critic Mark Lawson as “one of the best television dramatists”. In 1984 though, Milne was known as the creator of the BBC’s twice-weekly hospital drama series Angels. Running from 1976 to 1983, the hospital soap opera had attracted at its peak 20.9 million viewers in October 1979 (although this figure was undoubtedly inflated due to the ITV strike that ran throughout the autumn of that year). Angels had covered a number of interesting and provocative issues but was still most often regarded as a cosily familiar television programme. However, Milne had established a reputation as the writer “who’d proved against all viewing odds that a mass audience really could be gripped and moved by such harrowing topics as infertility and infant handicap”.

Her latest drama concerned a middle-aged housewife’s attempt to make it in the world of saloon car racing. “The stress of my series title … properly belongs not on the Driving, but on Ambition,” explained Milne. “ … I chose saloon car racing partly because it offered scope for humour and danger, but mainly because I knew about it.” Here was another Saturday night drama with much to say about the changing role of women in modern society. “If she is ever to achievein her own right, then now must be the moment,” explained Milne of her character’s plight – “wait any longer and it may be too late … If a pretty 20-year-old tires and fails, people react by saying, ‘Never mind, there’s always next year’. If you’re older and female, and lose, you stand to look extra foolish”.

Driving Ambition performed well enough for the BBC (9.4 million curious viewers tuned in for the first of its eight episodes). It is in many ways a prototype for later popular dramas such as Playing The Field, establishing a sub-genre for dramas portraying mature women rebelling against domesticity and misogyny.