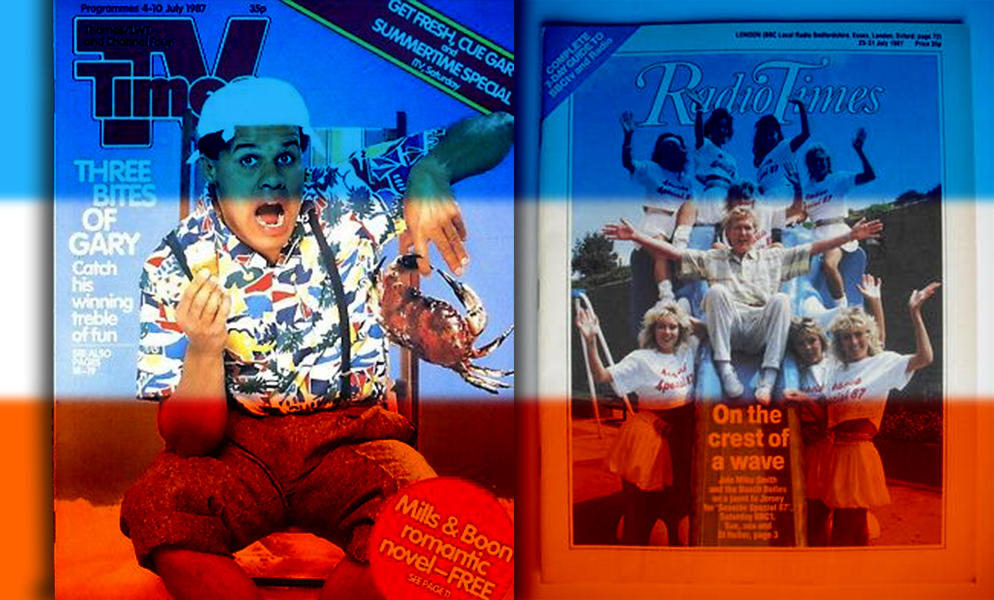 While comic impersonators enjoyed pretty much a monopoly on Saturday evening comedy programmes, series like Summertime Special provided a platform for a wider variety of acts. The second series of TVS’ showpiece boasted an eclectic line-up (including an appearance by Roger Whittaker). The series would also provide a rehabilitation of sorts for Chris Tarrant. Although the presenter was fiercely busy in 1987 (hosting Capital Radio’s breakfast show, recording numerous voice-overs for commercials and presenting Through The Keyhole), the stigma of the failure of OTT and Saturday Stayback just a few years earlier still rattled him. “We were getting complaints about a naked man holding balloons in front of his bottom,” he commented of the public’s disaffection for OTT. “It all seems pretty tame now, but I think they should have kept their nerve and not taken it off after only one series … I realise now that even if I say: ‘Good morning, this is Chris Tarrant, it’s six thirty,’ someone will write in disgust, complaining, ‘How dare you say it was half-past six! It was six twenty-nine and ten seconds! I demand an apology!’ My guideline, therefore, is what would not offend me or my kids.”

Away from Saturday night television Tarrant had proven himself adept at mixing with members of the general public, particularly within the numerous seaside resort-based reports he filed for TV-AM during the early 1980s. In Summertime Special he was again asked to fraternise with holidaymakers, and in the process was given the opportunity to re-educate Saturday night viewers. No more was Tarrant perceived as the anarchic ringleader of unpopular late night, supposedly “adult” entertainment. Here was a man at ease with the most mainstream and inoffensive variety show that ITV had to offer.

Not to be left out, in August 1987 Granada Television produced The Funny Side (not to be confused with the 1985 Thames sketch show), a series that promised to take a humorous look at all manner of subjects, starting off with holidays. It featured Melvyn Hayes, Linda Lusardi, Jeffery Holland, Barbara Windsor, Cheryl Baker (in one of her first major presenting roles on television) and also Mike Smith in a grab bag of comedy sketches and music all on a given theme. Although still a highly popular Radio 1 Disc Jockey, the return for Smith to Saturday nights represented an important step in his career (after the tragedy that had befallen his last Saturday night television series The Late Late Breakfast Show). Yet The Funny Side wasn’t actually the first Saturday night television show hosted by the post- Michael Lush Mike Smith.

“Under what circumstances will an otherwise sober and respectable male citizen appear in front of millions of viewers in a pink roll-on girdle and suspenders?” quizzed Nicki Household of Radio Times back in July 1987. “If you’re much under 30, you probably won’t know the answer – but here’s a clue: Tommy Trinder, Alfred Marks, Bob Monkhouse, Hughie Green, Des O’Connor, Robert Morley, Arthur Haynes, Bruce Forsyth and Norman Vaughan have all been involved in the proceedings. Mum got it right, of course – it’s Beat The Clock, the game show in which uninhibited married couples get 60 seconds or less per game in which to make absolute fools of themselves.” Under an almost constant barrage of comedy sketch shows, or end-of-the-pier variety revues, it is not surprising the BBC felt inclined to hit back. Previous years had seen the BBC presenting variety to the Saturday night masses via programmes that professed to feature new and upcoming acts. However, in 1987 the BBC determined to keep things simple, and brushed off not only the age-old game that had made Forsyth’s career, but also the variety show format it had last used in 1979: Seaside Special.

Renamed as Seaside Special 87and broadcast each week from Jersey, Mike Smith made for a refreshingly modern compere for what was (even in comparison with TVS’ own Summertime Special) an aged format. “There’s such a passion for nostalgia right now,” Smith protested, “especially anything to do with the 50s and 60s, that it’s got to be the right time to bring back Beat The Clock. Of course, most of the contestants will be far too young to remember it. It could be a bit of a risk, reviving something that was conceived before the age of computers and videos – but it’s good old-fashioned slapstick entertainment, and that’s just what you need on a seaside holiday show.” Broadcast at 8.25pm the six-week series featured acts such as A-ha, Shane Ritchie, Val Doonican, Little & Large, Roger De Courcey, Keith Harris, Joe Longthorne and The Roly Polys. It performed only moderately well (peaking at 8.8 million viewers). There would be no Seaside Special ’88. However, the series had surely secured the long-term future of its presenter.

Smith’s old Late Late Breakfast Show colleague was also busily trying to re-establish his career. Noel Edmonds’ appearances on television had understandable reduced in the aftermath of the terrible accident of the previous year. He had still presented his customary Christmas Day offering (which in 1986 was billed as Christmas Morning With Noel) and his game show, Telly Addicts (which had begun in 1985), ensured Edmonds retained at least a presence on television screens. However, on 23 May 1987 he would make his first tentative steps back on to Saturday nights. As chairman of the Stars Organisation for Spastics (SOS), it seemed only appropriate that Edmonds should host its TV award ceremony. “This is really a resurrection of the old Swap Shop Star Awards,” he explained, “which were not only incredibly popular with young viewers but also regarded as highly prestigious within the entertainment industry.” The ceremony itself honoured not only the most popular television performer and pop stars of the day, but also paid tribute to an act of special achievement (usually someone who had overcome a handicap or helped someone to overcome theirs). In many respects, the show seemed an ideal way to reintroduce Edmonds to his Saturday night audience. It was in the main concerned with the business of light entertainment, but also offered a serious and heartfelt message.

“The past several months, since the end of The Late Late Breakfast Show, have been a time for reflection and therapeutic work for Noel Edmonds,” reported writer Renate Kohler in August of 1987. “His energies have gone into his helicopter charter business”. “It helps that you are dealing with people who are not associated with show business and who demand good service,” added Edmonds. “Business gives you a little confidence, knowing that you can be successful in another, unrelated area.” Yet no matter how pre-occupying his other businesses might have been, it was clear that by the second half of 1987, Edmonds was ready to dip his toe back into the light entertainment. During August and September he presented Noel Edmonds’ Awayday for Radio 4, and in October he would bring a new series – Whatever Next … to our screens. Clearly there was still an audience out there for him. As 1987 drew to a close, a return to Saturday nights for Noel Edmonds no longer seemed unlikely. In fact it was beginning to look inevitable.

Next Monday: I Heard A Seat In The Stalls Go ‘Gerdonk!