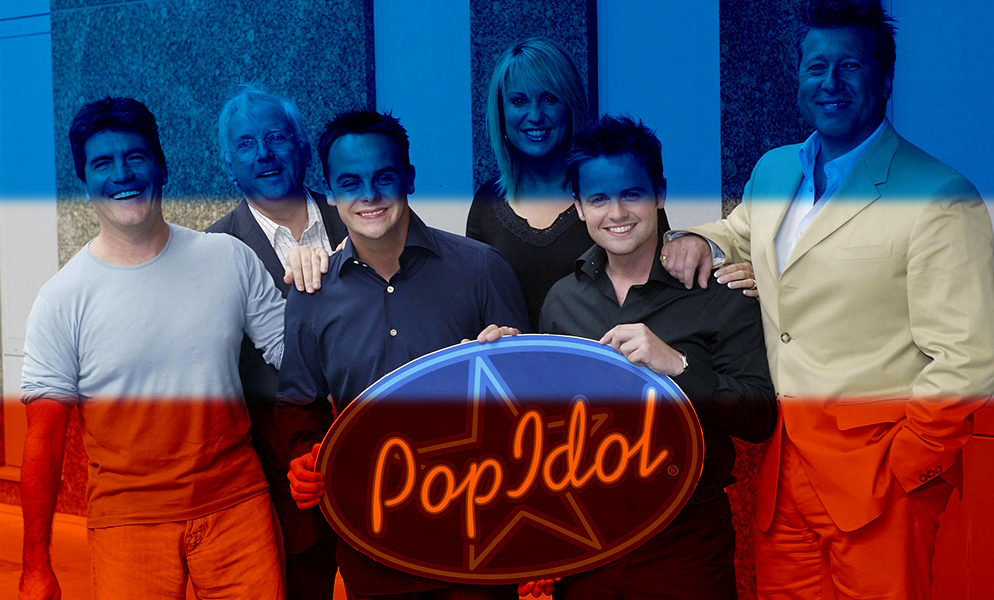 After Popstars, our expectations of the TV talent show changed forever. This became evident from the next series ITV launched on a Saturday night. This Is My Moment had been piloted in 2000 with Ian Wright, but after his defection to the BBC, the series in June 2001 was hosted by Mel B of the Spice Girls – a bit of stunt casting, maybe, but certainly a high profile figure. While Popstars had bought reality TV to Saturday nights, though, This Is My Moment was a more traditional light entertainment show, broadcast live in the studio. The twist was that contestants auditioned via a premium rate telephone line, and a percentage of the money made from both this, and the voting lines used on the night, would go into a prize fund and given to the lucky winner at the end.

While it was refreshing to see a show where there was little interest in finding lasting stars, in this post-Popstars world we now expected something more original. Perhaps unsurprisingly, Mel B was hardly the slickest host of a live television show, and most of the entertainment came from her hapless attempts at pronouncing the name of the series that came between the two halves of the programme, Poirot, with “We’re back after Pwyroe!” a particular high point. The last This Is My Moment was broadcast in front of a microscopic audience opposite the England vs Germany match in September 2001, and that was the end of the matter.

With Popstars a genuine hit, it wasn’t long before ITV launched a follow-up programme. It was surely too early for Popstars 2 – if nothing else, it would have seriously shortened Hear’Say’s already limited shelf life. Instead, we had Soapstars. This series did more or less what it said on the tin – the exact same format, only with aspiring actors now under the microscope, and a role as part of a new family in Emmerdale as the overall prize. It was met with much grumbling from Equity – who claimed this was depriving its professional members work – and by the cast of Emmerdale. It wasn’t entirely an original concept, either, as Hollyoaks had used open auditions to find new cast members 12 months earlier.

While Popstars was a huge success, Soapstars was not, and has now been forgotten by more or less everyone. It wasn’t helped by some external factors, such as the scheduling issues caused by ITV’s ill-fated 7pm Premiership. However the most obvious factor conspiring against it was that, while everybody could decide whether someone could or could not sing, it was harder to judge whether someone could actually act in a 15-second audition. The judges were less impressive than their Popstars equivalent, with head judge, ‘Evil’ Yvon Grace, a particularly resistible figure. The five who eventually found themselves cast in Emmerdale all had professional acting experience – and they were also all written out within a year, the family having been handed a role in the series so peripheral they were hardly in the village at all.

It seemed that pop music was the way forward. A bit slow off the mark with spin-off programmes while Popstars was going on, ITV made up for it throughout the rest of 2001. The original Australian series was run on Saturday afternoons throughout the summer (with the Irish equivalent also being screened as part of SMTV Live), and a one-off special in April saw Hear’Say perform, chat to Davina McCall and meet again some of the more memorable punters from the show. Come the autumn, the group, who were now more or less ITV’s in-house band, were signed up for a whole series, Hear’Say It’s Saturday. This was a set of half-hours broadly similar to the vehicles for the Bay City Rollers and Marc Bolan in the 1970s, with the band performing their own singles and duetting with guests like David Cassidy, while a Laugh-In-style ‘joke wall’ linked the various pieces. But after six months of virtually non-stop publicity, the novelty was already wearing off, and the series was shunted from teatime to lunchtime before the run was up.

While this was going on, Nigel Lythgoe was reflecting on the success of Popstars with his friend, the music business executive Simon Fuller. Although it had been a huge hit, Lythgoe was disappointed that some of the ideas he’d had couldn’t be used. He had wanted the public to get more involved by allowing them to choose the band’s name and the single they would release, only for the ITC to rule that this was too close to advertising. Fuller suggested that an even better idea was for the public to choose the entire band. Lythgoe said that this wasn’t the Popstars format, at which point Fuller realised there might be some mileage in it. He devised a concept through his company 19, and asked Lythgoe if he would like to join them to produce it. The tagline – “This time, you decide”.

Pop Idol was, at first glance, simply a retread of the Popstars format – the third outing in a year – only attempting to find a solo artist, rather than a group. The early episodes followed an identical pattern, with hopefuls attending auditions, music industry professionals casting their verdicts, and a mix of the exceptional and the embarrassing making the final cut. So far, so ordinary, but there were some changes. The most notable being that rather than a dispassionate voice-over, there were now presenters on the ground – Ant and Dec. They attended each audition and hung around with the judges and hopefuls, asking them for their opinions and taking part in silly sketches to jolly things along. This added a great deal of personality and moved the series away from documentary and towards light entertainment.

The show’s judges were also more flamboyant. Nasty Nigel remained behind the camera this time around, but Nicki Chapman stayed on board. She was joined by legendary record producer Pete Waterman, Capital Radio DJ Neil ‘Doctor’ Fox and someone who they’d tried to land for Popstars, Simon Cowell. This was a heavyweight line-up, and the auditions were changed so that the hopefuls entered the rooms one-by-one and faced all the judges – thus heightening the tension and hopefully causing more conflict.

These were fairly cosmetic alternations, though. The big difference came when the hopefuls were narrowed down to 50. At this point, it turned from a documentary to a more traditional light entertainment show, as each one performed in front of the cameras, and it was down to the viewers to phone in and choose their favourite. The judges were still on hand to offer their opinions, but it was us who had the final say in cutting the field down to 10. At this point, the series had been running long enough for the viewers to become familiar with many of the competitors – Gareth Gates and Rik Waller had, for obvious reasons, caught the eye very early on in events, while Will Young had snuck through (indeed, the judges later admitted that one of the main reasons he’d made it to the next stage was because they needed more men to even out the genders).

By the time the final 10 had been found the programme had become a huge hit – fortunate, given its marathon run. The next stage was different again, with the action relocating to the massive Fountain Studios. The final 10 performed live each week, with the hopeful with the fewest votes being eliminated each time (in fact, the original plan was for viewers to actively vote for which contestant they wanted to see the back of, but this idea was abandoned when various internet campaigns pleaded for the public to vote out overwhelming favourite Gareth at the first opportunity). This could have made for dull viewing, watching the same people over and over again, but the production team tried hard, and cleverly used a different theme each week. The happy side-effect of this concept was that we could see the likes of Will and Darius grow as artists show-by-show, and get to know them much better. By the time we’d got to the final five, everyone had a favourite.

“What Pop Idol did so brilliantly was to take the lessons that had been learned from the reality shows that were becoming huge hits, but not on the prime channels,” says Paul Jackson, one-time director of comedy and entertainment at ITV. “Big Brother never was a big hit on Saturday night … but the people involved in the creation of the new talent shows learnt the lessons of Big Brother They had learnt about how interested the public was in seeing themselves reflected in pressure situations and what Pop Stars and Pop Idol did was to take that and elongate it across 17, 20 weeks of drama and tension and tears and joy. The dramatic arc is very clear and very strong.

“The brilliance of Pop Idol is it took the traditional entertainment elements, amalgamate it with those people elements and make this new thing. And in a way I think it’s different from, and it’s clearly more broadly appealing than, reality television, I take reality to be Big Brother, Survivor, and all those shows. Pop Idol isn’t that, Pop Idol is a blend of reality and entertainment and it makes the strongest mix.”

“Pop Idol for me was another of those programmes that glues the family together, very much like Gladiators,” says Nigel Lythgoe. “The whole family can come together –  they can actually support one or the other. When I was growing up as a kid it was soccer. My dad was an Evertonian, I was a Liverpudlian, and we used to argue every Saturday night about games. And the same thing happens with Pop Idol, families support different people.”

The final episode, on Saturday 9 February 2002, received a mass of column inches. The series had been a huge hit and proved that light entertainment was alive and well. But this was a very 21st-Century take on the format. One episode took time out from the singing to allow the audience to ask the judges questions, one of which involved a discussion on how the programme had dealt with Rik Waller’s throat problems and his subsequent withdrawal from the series. On a previous show, a knotty problem such as this may have been swept under the carpet, but Pop Idol spent time debating the various merits of their contingency plans to replace him – a refreshing honesty towards the audience.

Although Will Young was voted as the winner, there were numerous victors of Pop Idol. There were Ant and Dec, finally stars of a successful primetime series and much acclaimed for their gentle manner with contestants. There was Simon Cowell, a hugely famous face after two decades of success behind the scenes. There was ITV, who had put the failure of the 7pm Premiership behind them after just six months. And there was Simon Fuller, the pop svengali who had invented the format and was soon to see it span the globe in a Millionaire fashion.

For a pop idol of the sixties, though, Pop Idol’s success would help spell the end of a Saturday evening behemoth.

Next Monday: King of trash, that’s me