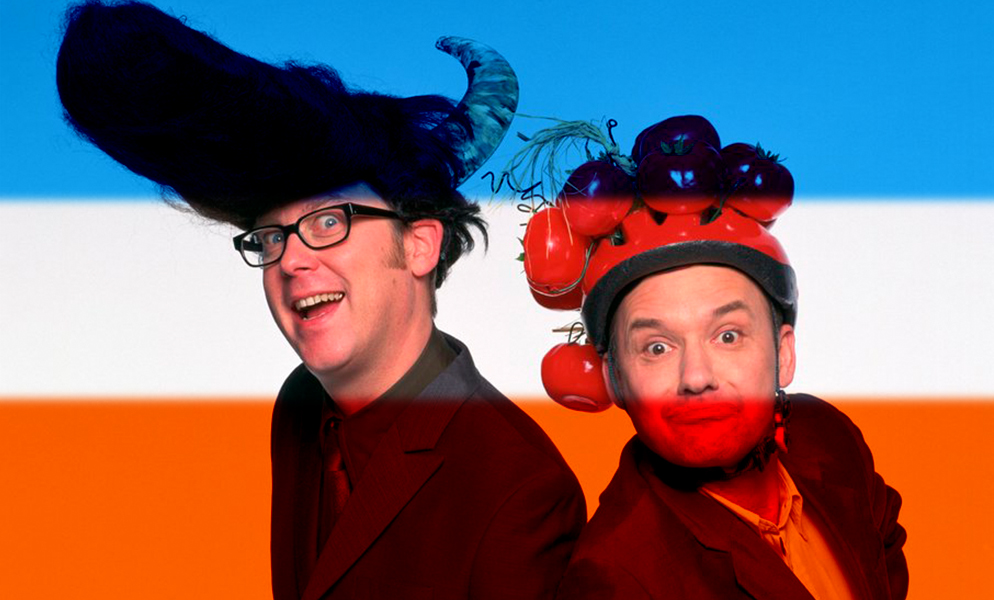 The script was already written. Three weeks after Noel’s House Party took its leave, a new series was to begin on Saturday nights that, some thought, would take light entertainment in a completely new direction. The old guard had been pushed out and the next generation were now in charge. At least, that was the plan.

Vic Reeves and Bob Mortimer had recently revitalised the comedy panel game with Shooting Stars, which had achieved some remarkable viewing figures for BBC2 and turned a duo who were previously a cult into a possible mainstream proposition. Perhaps predictably, then, the BBC felt they could be pressed into service on the main channel.

Those who worked with Reeves and Mortimer always paid tribute to their talent for coming up with new ideas – for sketches, characters and whole programmes. As Mortimer himself commented, “We’ve got a handful of ideas at any one time, and I was in the Groucho Club with Alan Marke, our producer, probably drunk, saying ‘Look, we should do one of these things. Will you write it down, please?’” The idea was for a new game show, Families at War, aimed squarely at the Saturday night family audience.

However this was not envisaged as a vehicle for the duo, Vic and Bob instead intending to stay firmly in the background to oversee the production. Alan Marke’s first idea was to offer it up as a vehicle for Shane Richie and Ulrika Jonsson, but the BBC said that they only wanted Vic and Bob to present – as Marke said, “The BBC want their take on it so it isn’t just another version of the Generation Game”. They were happy for Ulrika to still be involved, but she turned it down as she felt she was didn’t want to become part of “Reeves, Mortimer and Jonsson”. A pilot was then filmed with Denise Van Outen, but the BBC were still adamant that without Vic and Bob, there’d be no show. Hence the broadcast pilot, aired in August 1998, saw Vic and Bob upfront alongside Alice Beer, the Watchdog presenter, acting as umpire. Popular enough in the summer, a whole series was commissioned for April 1999.

Families at War was a fairly simple format. Each week, Reeves and Mortimer would lead two teams of three family members, each of whom would play a game based on one of their talents. They would go head to head with judges picking the best each time, and whichever family won two out of three would go into the final in the hope of claiming big prizes. So far, so ordinary, but of course there were a few touches that illustrated the influence of its creators. As such, each contestant would introduce themselves via a specially-written song, along the lines of “I’m Carol, a beautician/Waxing an ape is my ambition”. Each team could play a joker and double their points if Vic or Bob donned a pair of special trousers, while the jury was made up of such bodies as 12 jockeys from Gillingham and 12 shoe salesmen from Surrey.

The games the contestants played were very obviously designed by Vic and Bob. One contestant reckoned his special skill was milking cows, so he was engaged to squirt milk from a fake cow’s udders in order to repel zombies led by Les Battersby from Coronation Street. Another participant held records in power jogging, a sport that involved running while carrying heavy weights, and was required to jog on a treadmill while giving a piggy-back to Leo Sayer, who sang throughout. Meanwhile in the final, Vic and Bob took it in turns to dress up as a spider and get suspended in mid-air while the winning family turned pulleys to move them in the direction of the prizes. After years of shows such as Noel’s House Party running on autopilot, this level of innovation was most unusual on Saturday evenings.

However, following eight years of the House Party, Families at War lasted just eight weeks – with an average audience of just 3.4 million viewers it managed to make it into Broadcast magazine’s chart of the least successful primetime series of the decade. One obvious reason for this was the scheduling of the show, at 5.50pm – far too early to grab the really big audiences, and actually scheduled before Big Break, the epitome of outdated light entertainment. Though it’s perhaps fair to say that the BBC got it wrong, and that it may have been more of a success had Reeves and Mortimer not been in charge; the duo were still not popular with all sections of the viewing public. While they had a loyal set of youthful fans – most of whom wouldn’t be watching telly at six o’clock on a Saturday – the older audience didn’t much care for them. Therefore, the first series of Families at War turned out to be the last.

So what could be done with Saturday night entertainment if the next generation seemed as unable to succeed as the previous one? It was perhaps instructive that Saturday nights in the autumn of both 1998 and 1999 saw the coveted 9pm BBC1 slot not given over to new drama or entertainment, but the docusoap Airport. However in the end, 1999’s most successful new series turned out to be one of the most traditional formats of all.

The talent show had been a part of light entertainment since the battles between Opportunity Knocks and New Faces in the 1970s. Now three similar formats were all unveiled within a few months of each other. First up in February came the BBC’s Get Your Act Together. Here, two budding popstars or groups would be groomed by songwriters, musicians, producers and stylists, and would then perform in front of a live audience. In these post-Pop Idol days the format seems familiar, although this was a much more sober take, with the contestants generally writing their own songs and chasing after credibility rather than fame. Most of the interest in the series, however, came with the presenter – a television debut for Boyzone’s Ronan Keating, in the midst of a transition from teen pop star to all-round entertainer. It’s certainly true that Get Your Act Together was an intriguing look at the machinations of the music industry, with the winners chosen by an audience vote that, intriguingly, took into account the acts’ appeal across various age groups. However the major problem with the show was that it was too serious for a Saturday night, and nobody seemed very interested in the results. Ronan decided not to present a second series, and while the production team claimed it would return with another host, in the end it didn’t.

A few months later, ITV unveiled Give Your Mate A Break. As with Families at War and Truth or Consequences, this had been piloted the previous August, when it had been fronted by John Leslie. For the series in July 1999, Les Dennis took the reigns – a rare foray outside the Family Fortunes studio. Give Your Mate A Break laboured under an appalling name, but it did at least describe the format well enough. Each week, four people would be surprised by Les, having been nominated by their friends and family as having a talent that deserved TV exposure. Like Get Your Act Together, the contestants would enjoy the benefit of professional mentors, although the range of acts was wider, with comedians, magicians and even poets considered along with singers. With the Granada team behind Stars In Their Eyes producing, the studio sections went very much along the same lines, with the same appeal of the transformations and the same audience vote. Yet for one reason or another, the series was nowhere near as successful and was dropped after just one run.

At least these two shows attempted to put a new twist on the talent show. Star For A Night was hugely derivative of virtually everything that went before. The programme debuted in June 1999 and saw a number of wannabe singers performing in the studio, before a panel of judges passed comment and picked a winner. Yet this actually turned out to be a big hit, running for two full series. The show was presented by docusoap star Jane McDonald, who proved to be likeable enough in front of the camera and was gentle with the contestants – presumably because she had gone through this sort of thing in previous years – while the judging panel saw record producer Nigel Martin-Smith and actress Barbara Windsor joined each week by two guest singers, producers, writers or critics. If it was all a bit too ‘nice’ or slick, it made for fairly enjoyable and amiable viewing, and it didn’t seem to assume too much, the title was perhaps the most accurate of all time, as excepting a young Joss Stone, it had no pretensions of finding any lasting talent.

Such was the undemanding nature of the series that possibly the most notable moment of the run came when Sunday Mirror TV critic Ian Hyland was on the judging panel and, unlike Windsor and Martin-Smith’s regular platitudes, started speaking frankly and dismissively of the contestants’ prospects, requiring the producer to go on Points of View to apologise for his “nastiness”. Of course, in years to come, that would become a major selling point of the TV talent show.

A couple more stinkers came off the conveyer belt in 1999. Despite the disappearance of Noel Edmonds and Jeremy Beadle from the schedules, and the failure of 1998’s Red Handed, hidden camera shows were still considered to be a worthwhile venture. In September 1999, BBC1 presented The Hidden Camera Show, a series that turned out to be as original as its title implied. The one aspect of note was the programme’s presenter. Ainsley Harriott had become famous as a TV chef, appearing in shows such as Ready Steady Cook, though it must be noted that he had actually started his TV career as a stand-up comedian and appeared in a number of comedy shows in the early 1990s. Certainly he had charm and personality, and Harriott’s diversifying into the world of light entertainment, following docusoap stars such as Jane McDonald and Jeremy Spake, illustrated the new breed of personalities taking over from more traditional entertainers.

Next Monday: Don’t Get Mad, Get Even