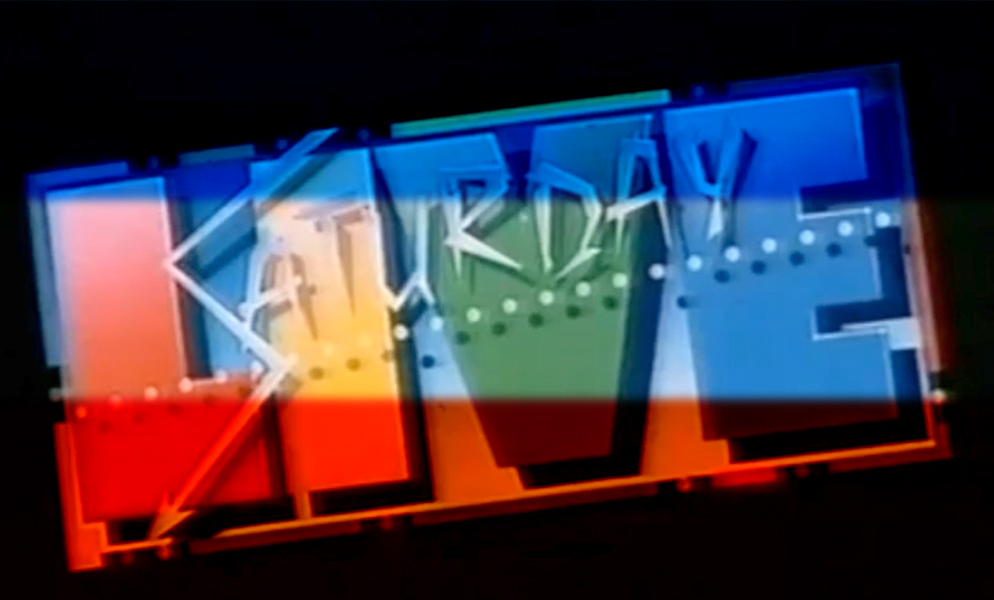 LWT poured all of its resources into the production of the pilot edition of Saturday Live, using their largest studio and determinedly packing in as many and as varied acts as possible. Key to the programme’s success was its live nature. However, this element was not a foregone conclusion and John Birt had to fight hard with Channel 4’s chief executive, Jeremy Isaacs, not only to secure the show its live transmission, but also to attain the 8.30pm slot that Birt believed was required. Initially Isaacs had been resistant, concluding that by scheduling Saturday Live later in the evening he would be able to construct a stronger schedule.

However, with these battles won, Birt could sit back and take satisfaction in one of his company’s most innovative programmes. “Ninety minutes long and very definitely live, the show was produced with breath-taking ambition by Paul Jackson, and directed exhilaratingly by Geoff Posner from LWT’s largest studio, with wild, imaginative sets and a studio floor heaving with a large, mobile, stand-up audience.” Part of the programme’s appeal was its ramshackle nature: “Saturday Live, on Channel Four is either going to be an expensive, embarrassing disaster or a smash success,” proclaimed Jackson just weeks before transmission. “But if you can get the atmosphere going with live television you can be right on the nose with humour and comment. Performers wind themselves up as they do for live theatre. There’s a harder edge to it all. Saturday Live could be the place you have to be because it generates excitement. It could be an event where tickets are like gold-dust”.

“I did that on my own,” remembers Jackson some years later, “I really tried to remember what I knew from the traditional shows I had done and took a lot of notice of Saturday Night Live. I tried to blend who I thought were the best performers at the time that I had worked with in other genres.”

TV Times own build up to the first edition dwelled on the fluidity of the show’s line-up commenting that “such illustrious showbusiness names as Rik Mayall, Peter Cook and Alan Bennett” were expected to appear. The manner in which the magazine discussed likely acts revealed much about how unknown many soon to be household names were prior to Saturday Live. For example, French and Saunders were quaintly described as “the plumply pretty female duo, all social awareness”. The pilot show’s compère, however, was rather better known. Perhaps due to his association with Jackson on Three Of A Kind, or maybe Central Television’s late night Tiswas spin-off, OTT. Henry had proved himself able to handle a live television programme and, as a comedian who had defected from a traditional variety background (winning New Faces in 1975) to alternative comedy, was a natural choice as host.

“(Saturday Live is) a broad, mid-stream variety show of a different type,” Jackson told TV Times, “so it’s obvious what Lenny is doing in there”. “They’re waiting for you to make a huge mistake,” commented Henry. “You can smell the fear in the air when Top of The Pops goes out live. People dry up. We used to have terrible things happen on OTT. I just get on and hope my bottle doesn’t go.” Precious little ever went wrong on Saturday Live,such was the slickness of the production. Comedy acts were interspersed with the occasional musical number, (The Hooters, The Eurythmics and Curiosity Killed The Cat all appeared), often timed to allow a stage to be properly dressed for the next performance, and the whole operation ran with a pace and tautness that seemed as revolutionary as the comedians themselves.

“The construction of the first series was pretty much as I had learned working with [comedy producer and director] Geoff [Posner] at the BBC ,” recalls Jackson. “He and I knew exactly what the language was. You had a host, you had a core team who did sketches, you occasionally did a film item. You certainly needed some VT pads in there because you are running the show live and you needed some padding to change studio  audiences around and studio sets around. You had at least one musical guest in the long version, and in the hour-and-a-half version we would very often have two. You try to get the host to interact with the guests and we always had an American stand-up comic. So we very much took the form of the traditional Saturday night variety show, but instead of Elaine Page and the Two Ronnies, we had Lenny Henry and French and Saunders and an American comic and The Style Council.”

Geoff Posner remembers that the aim was to achieve “that moment when somebody would walk on, and there’d be applause of recognition. In other words, there was something called the Coneheads in the States, with these people with cones on their heads, and whenever they walked onto the set, there was a big round of applause.  We wanted the public to get to know the characters, and to get to like the characters, so that they had a life of their own.”

Intentional anarchy was built into the show, but it also adhered to a carefully devised format. “We talked about the construction of entertainment shows and nearly all of them had one mechanism or another whereby the hosts would walk down at the beginning and talk to each other,” says Jackson. “When we started Saturday Live we couldn’t find the way to do it.  We didn’t want the host to come out every week and do a kind of monologue because that would work for Lenny Henry, but it wouldn’t work for Tracey Ullman, so we had to get a different device, probably not host dependent, we had to have something that we would control.” A news desk helmed by Felix Dexter was tried, as were opening sections featuring comedy troupe Cliff Hanger. “We couldn’t get it right. By about the fourth or fifth week, the head writer on the show, Kim Fuller said, ‘we have got a real problem because we have major events going off like the Challenger disaster and we just can’t deal with it.’” It was Fuller that pointed Jackson and Geoff Posner in the direction of Harry Enfield. “Geoff and I knew Harry, from various things,” says Jackson, “he hadn’t broken through yet, but Kim had seen him doing Stavros the, the kebab shop owner and realised the character could carry the topical material. And that’s what we did, we got Harry in as a one-off and wrote the material with him and we had found the answer.”

Next Monday: The audience just sort of started to freeze on him