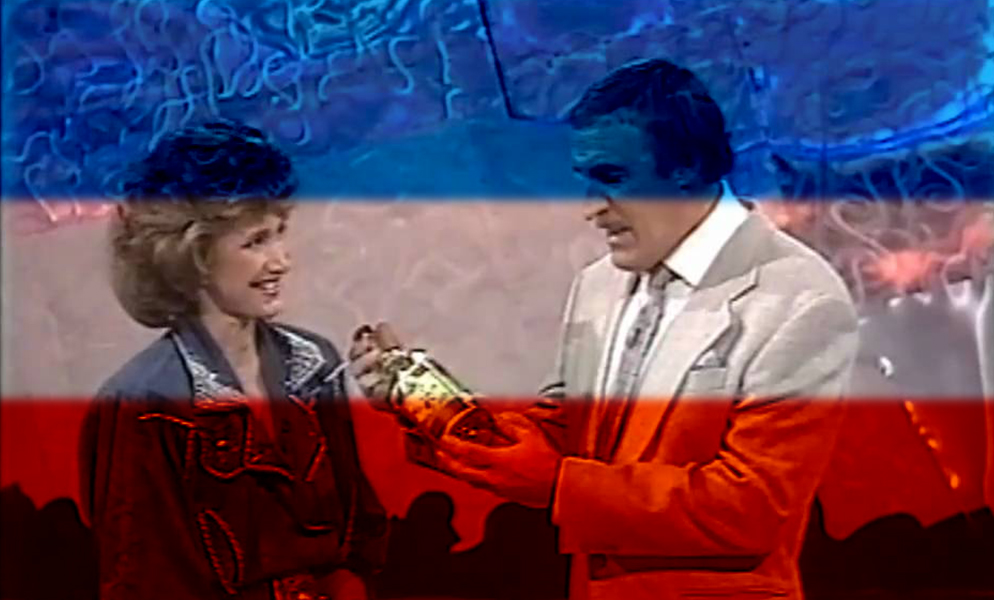 Another familiar, some would say iconic, figure also found his way back to his rightful place in 1988. Unbelievably it had been 10 years since Bruce Forsyth had last presented a series on Saturday nights. The format chosen for his return was German in origin and well suited to his particular talents. Given that it was to be produced by LWT, it seemed likely to be a hit. However, events at the London station almost prevented Forsyth’s new vehicle – You Bet! – from making it to our screens at all.

The power of the Unions, and specifically the ACTT might have been on an irrevocable decline throughout the 1980s, but they still retained enough clout to ensure that any director of programmes did not take them too lightly. In 1987 having steered the company through an intense period of cost saving, John Birt departed LWT for the position of deputy director general at the BBC. His successor, appointed by LWT’s managing director Brian Tesler and chairman Christopher Bland was TVS’ Greg Dyke. Having proven his worth as, effectively an LWT stooge in ITV’s most lucrative franchise, as well as demonstrating his ability to defend his corner at the notorious ITV Network Controllers’ Meeting, it seemed the right time to bring Dyke back to the station that had given him his first break in television.

Aware that a Government review on the future of television (the influential Peacock Report) had proposed that the next set of ITV franchises should be awarded to the highest bidder, Bland and Tesler were less concerned with LWT’s future as a programme maker and more concerned with streamlining their in-house production facilities and large unionised workforce in order to ensure the company was financially lean enough to see off any rival bids come the time of the awards. To this end, Dyke was determined to address LWT’s relationship with the unions once and for all.

The plan he hatched was elaborate and meticulously worked out. Dyke purposely orchestrated a confrontation with all of the unions at the same time. His intention was to reduce staffing levels and scale back on LWT’s terms and conditions. Anticipating that the unions would retaliate by organising a strike, Dyke set to work nullifying that expected threat. The audacity of what he had in mind attracted a great deal of press speculation (a fact in itself that would later prove to be an essential part of Dyke’s strategy). “LWT Agrees Secret deal to Break Possible Strike” proclaimed The Guardian in March 1988. “London Weekend Television has agreed a secret strike breaking deal to make and broadcast its programmes from Holland if its proposals to cut technical staff and reduce overtime payments lead to industrial action after they are put to the television Unions tomorrow” reported Peter Spinks and Sarah Boseley.

“LWT has worked out a complicated route for transmitting to London programmes made in a specially constructed studio in Amsterdam. It intended that neither the Dutch nor the British broadcasting authorities should know the origins of the signal … The plan is for Holland Vision, a Dutch-based subsidiary of a British programme making company, Molinaire, to hold and transmit on its video tape machines a stockpile of LWT programmes made by independent producers. Television presenters, producers and programme directors would be flown over to supervise the broadcast from the Amsterdam studio.”

Unsurprisingly the unions were angered by this news. “If I were sure they were making plans like that we’d be very disappointed,” commented John Deering, the LWT shop steward of the ACTT. “I’d have thought they’d have more faith in their staff.” As the dispute rumbled on it became clear that the ACTT were in a perilous position in respect to LWT. They were suffering on several fronts with Union members in April of that year rejecting calls for a national strike in support of the prolonged and highly embittered disagreement taking place at Dyke’s old home, TV-am. For the unions it proved too much. At the end of March Dyke presented all members of staff with a new contract that they were forced to sign. It marked the end of the union battle at LWT and with the fight becoming ever more futile at TV-am, coupled with increasingly anti-union legislation being pushed through Parliament, there seemed no other option left but to capitulate. LWT was able to begin a cost-cutting exercise that would see its staff numbers reduce by over half over the course of the next five years.

It was only some time later it transpired that LWT had deliberately spread rumours regarding their plans to broadcast from Holland (going so far as to send managers off down corridors in LWT’s headquarters conspicuously armed with Teach yourself Dutch books). While some thought had gone into how LWT could run their service from Holland if required, Dyke’s preferred contingency was to broadcast episodes of an American soap opera that he had purchased, but had pointedly failed to schedule (much to the bemusement of the other ITV station heads). However such was the strength of the Dutch story that in April, Dutch telecommunication authorities started work on introducing legislation to prevent LWT and other companies broadcasting covertly from Holland in the future.

Of course little of this mattered to Bruce Forsyth. Since the untimely demise of Bruce Forsyth’s Big Night he had found success with LWT and the long-running Friday night game show Play Your Cards Right. He had also branched out into comedy acting with two series of the Thames Television sitcom Slinger’s Day. Further game shows followed in the mid 80s with Bruce helming Hollywood or Bust, “a show in which I assumed the role of a film director auditioning members of the studio audience to play famous film actors and enact a scene from a famous movie,” recalls the entertainer. “For example we would get four would-be Vivien Leighs and Clark Gables out of the audience, choose two of them and then get them to perform a scene from Gone With The Wind – under my direction. It was an entertaining idea and, but for some contractual problems over the format, would have benefited from a second series to perfect.”

In truth the format for Hollywood or Bust seemed influenced by the movie-themed games of The Generation Game. As the progression of the show relied less on some set of self-evident rules within the game’s format and more on a sketchy notion of how one’s career might progress in the movie business Forsyth was required to work tirelessly to ensure the audience could make sense of it all. Forsyth’s next opportunity looked more promising, and for the performer potentially very exciting – a chance to present on American television. Hot Streak was a daytime game show broadcast on ABC consisting of a team of five men taking on a team of five women in a word guessing game. Unfortunately its production and transmission coincided with a period of great turmoil at ABC and the series was axed as part of sweeping changes made when the head of the network was sacked. This obviously curtailed any chance Forsyth had of making it big in America (a long held ambition of his).

You Bet! was a far more successful proposition. Having acquired the rights to the series, Forsyth then sold them on to LWT and set to work making a pilot episode. Filmed in LWT’s London Studios it became evident that for the series to reach its potential it required a far bigger stage. So, the series proper was recorded at the vast Shepperton studio. “This was long before ‘big’ shows like Gladiators hit the screens,” recalls Forsyth “and was the first time in the UK a television game show had been made on this scale. The format was quite simple: a member of the public would claim that they could complete a seemingly impossible challenge and a celebrity panel would then bet on whether they could or not. While the winning celebrity would win a lot of money for a charity of his or her choice, if a celebrity was wrong they had to do an unpleasant forfeit.” The Guardian billed it as “a refreshing, exciting combination of a gameshow and a people show! And if that doesn’t seduce us all its got Bruce Forsyth too!”

The first show broadcast on February 20 1988 featured Dickie Davies, Richard Digance and Kate Robbins as the celebrity panel and attracted an impressive 13.8 million viewers (this was to be the show’s highest ever rating), establishing You Bet! as yet another of LWT’s reliable light entertainment hit series (it was able to attract around 10 or so million viewers during its first three years). However, Forsyth remained uncomfortable with the show. His short-lived rap at the beginning of each programme (in which he quizzed the audience “You wanna bet on it?” to the massed response of “You Bet!” and then followed up with “So you wanna get on it?” and so on) certainly lacked the catchiness, warmth and indeed brevity of “Nice to see you, to see you nice” and was perhaps indicative of Forsyth’s discomfiture.

The heart of the issue though was that You Bet! didn’t allow Bruce enough of an opportunity to build up a rapport with the ordinary members of the public appearing on the show (always his forte). Given that only the celebrity contestants remained as permanent fixtures over the course of an episode, a member of the public who came on to attempt a single challenge was on and off again in a matter of minutes. In the event Forsyth would stay with You Bet! for three years, before heading off for pastures new (or perhaps old). The series though lived on, with Matthew Kelly and then Darren Day and Diane Youdale assuming the presenter’s role until its demise in 1996. You Bet! found some sort of life after death though, with Darren Day moving on in 1998 to co-present Don’t Try This At Home, a Saturday night series that featured audacious stunts and challenges, in a format that owed much to You Bet!

Next Monday:The yarns worked their tried and tested magic