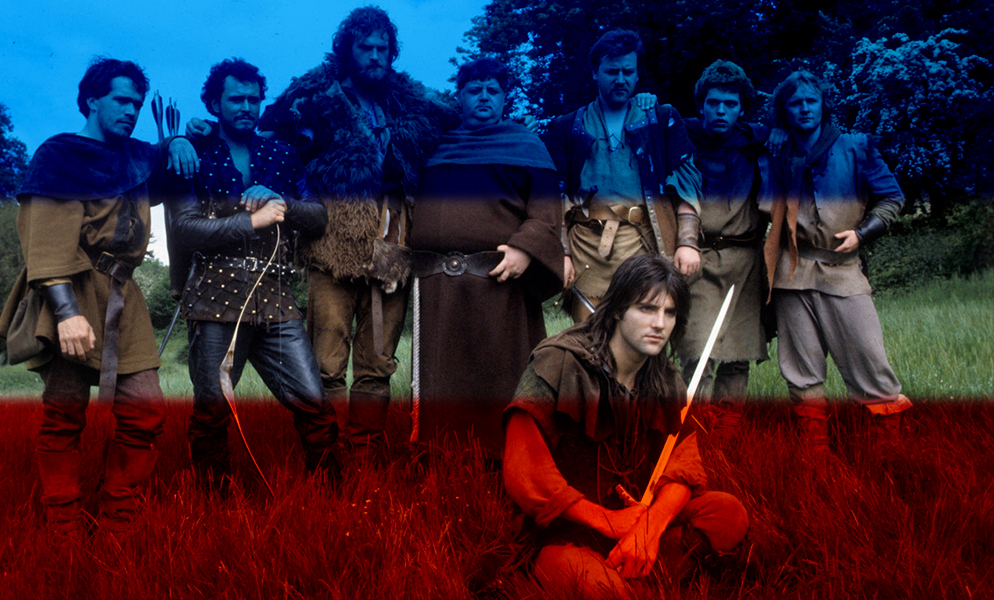 ITV’s own Saturday night dalliance into the realm of telefantasy was more successful, although it too would suffer from an early demise. Running in an early evening slot from 28 April 1984, for only five weeks, Goldcrest and HTV’s Robin of Sherwoodwas an expensive, but popular addition to ITV’s spring schedule. Written by Richard Carpenter (who created the popular children’s series Catweazle and Dick Turpin), Robin of Sherwood was a fantastical reinterpretation of the classic story. “This is the only English legend that doesn’t have any magic,” observed Carpenter, “so I put some in.” The series’ pagan allusions (including references to the pre-Christian Herne the Hunter) and political subtexts provoked complaints from media pressure group, the National Viewers’ and Listeners’ Association, but came about as a result of Carpenter’s distaste for the violence and simplicity of the original Robin Hood ballads. “They’re really just knockabout farce, with pathetic little stories, but they are also very cruel and callous tales. The characters hit each other over the head a great deal, and there’s lots of killing, but not much else … But Robin is a character who captures everybody’s imagination. Perhaps because we’re all anarchists at heart, and we like that idea of somebody putting one over on the law”.

Although the storylines addressed some relatively complex political and religious issues, Robin of Sherwood’s production values played a significant part in assuring viewers that the series was to be serious in its examination of the Robin Hood mythos. Beautiful locations and superb acting, plus an evocative BAFTA-winning soundtrack (provided by Irish band Clannad) resulted in a British television drama with a lustre that was unfamiliar to most Saturday evening viewers. The series benefited too, from an emerging school of post-modern revisionism that would – in the next few years – see an array of cultural icons and fictional characters taken back to their roots. Four days before the first episode of Robin of Sherwood, ITV transmitted the first of Granada Television’s similarly definitive interpretation of Sherlock Holmes, while the BBC was embarking upon a run of equally authentic dramatisations of Agatha Christie’s Miss Marple adventures. In the same year, cinema would provide us with a back-to-basics version of the story Tarzan (Greystoke: The Legend of Tarzan, Lord of the Apes) and in subsequent years both Batman and Dracula would receive similar treatments on the big screen.

Robin of Sherwood attracted significant publicity, including a feature on a 1983 edition of the Grampian Television Arts programme The Electric Theatre Show. This regional series chose to treat Robin of Sherwood with a great deal of respect, signifying that the drama (although broadcast in an early evening slot and containing elements of fantasy) was not for children. The first series achieved credible ratings (higher than those achieved by The Tripods) with the final episode attracting 10.6 million viewers. A second series followed in 1985, culminating in the death of Robin (Michael Praed). While the actor had decided to seek his fortune on the stage, the series continued, and Jason Connery assumed the title role for the third and final run.

Elongated and with new scriptwriters to support Richard Carpenter, the third series is generally regarded as inferior to the first two. Many cite Connery’s performance as wooden and less charismatic then Praed’s. In addition, the new writers (including Anthony Horowitz who some years later would create his own Saturday night television show) were said to be unsympathetic to the series “archetypal content”. With declining audiences, Goldcrest decided to withdraw their funding. Unable to finance such an expensive production by themselves, HTV was forced to pull the plug late in the day, leaving Carpenter with no time to write a suitably conclusive episode to bring down the curtain on season three and Robin of Sherwood as a whole.

Like many cult programmes, rumours have surfaced on a regular basis of a revival. In 1991 Praed, along with Nickolas Grace (who played the sheriff of Nottingham) appeared on TV-am to discuss a mooted new production. The intention was to film a mini-series in the summer of 1992, presumably for broadcast some time during the next year. Once again Richard Carpenter would have written the scripts, and the programme’s original producer, Paul Knight, would be at the helm. All the new production required, in the words of Praed, was “for the money men to do whatever money men do”. However the money men didn’t and the mini-series fell through. To date the series’ fans remain without closure. In a later interview though, Praed still expressed affection for the HTV production: “It was 20 years ago since I did Robin of Sherwood,” he reflected, “and when people do mention it they mention it favourably. I look back and think ‘that was pretty good’”.

Next Monday: I wanted to make sure it was going to be disastrous