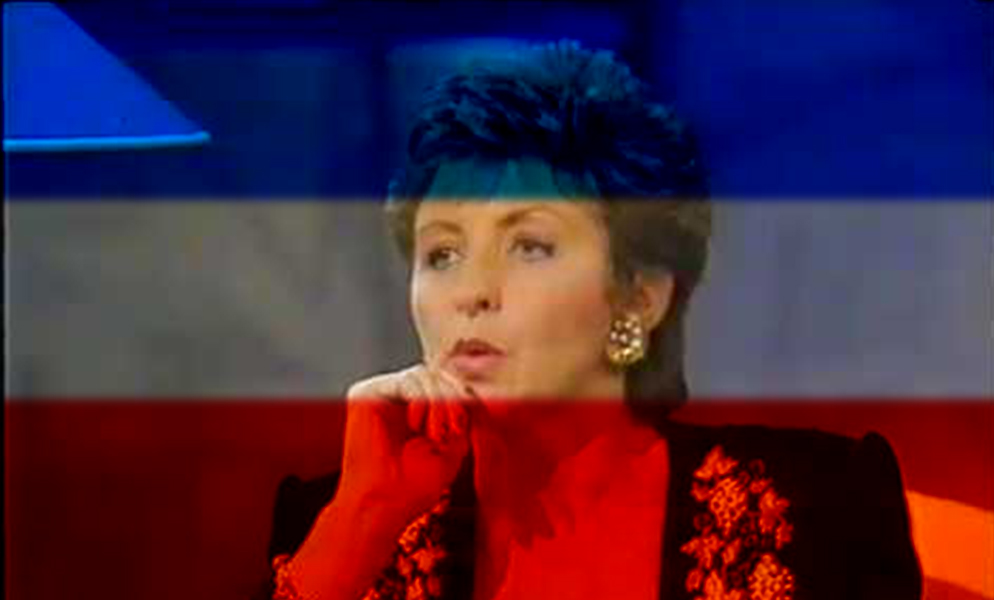 Over at the BBC, attempts were being made to commission a new Saturday late-evening chat show. Ever since the departure of Michael Parkinson to TV-AM in 1982 and the demise of the popular Saturday Night At The Mill, there had been countless efforts to try and find a suitable replacement. None of which had been wholly successful. Although there was to be nothing to match the sheer awfulness of 1982’s Sin On Saturday, nothing presented itself as a suitable long-running replacement to Parkinson either. Terry Wogan’s stint on Saturday nights (before being moved by Grade into weekdays) had been successful enough without ever threatening to attain mass popularity. In 1984, undimmed by the failure of Sin On Saturday, the BBC made an attempt at another loosely themed, original Saturday night talk show format.

“If I’d known what I was letting myself in for I’d have turned round and gone straight back to California,” joked Vidal Sassoon. He had just agreed to host the first edition of the BBC’s new series Saturday Night Affairs. The premise was pretty straightforward – each week a celebrity would host a 3-hour party for 100 friends at the BBC’s Pebble Mill studios, and the resultant jamboree would be edited down to 45 minutes and broadcast at 10.10pm on Saturday nights. Sassoon’s show featured Bruce Forsyth, Lionel Blair and Anita Harris (amongst others). The series pledged that people would open up and give an airing to topics they hadn’t spoken about before. In addition, there was the tantalising prospect of guests “when they felt like it, performing an impromptu musical number.”

The second programme featured Dave Lee Travis, but the series was cancelled before the third (hosted by Victor Spinetti) could be broadcast. The loose, informal format of acquaintances with years of shared history, perhaps predictably failed to translate successfully to the television screen. However, just a few weeks earlier, LWT had managed to successfully crack the Saturday evening interview show. “I do enjoy talking to people, certainly,” Michael Aspel remarked in March 1984. Aspel & Company was as conventional a talk show as Saturday Night Affairs was unconventional and in many respects it was the real successor to Parkinson. Aspel, however, could not lay claim to Parkinson’s ability to extract truly memorable interviews out of his guests, but nonetheless Aspel & Company did well enough in its first year, attracting 9.1 million viewers for an episode in June 1984 featuring Richard Clayderman, Paul McCartney and Tracey Ullman. And by 1987, Aspel was pulling in a mightily healthy 14.9 million viewers.

The series, while never a talking point (save for the time a drunken Oliver Reed was invited to appear), was a dependable stalwart of LWT’s schedules for nine years, a consistency that the BBC could not hope to match in the 1980s. It was joined in the schedules in 1987 by Parkinson One-To-One. This Yorkshire television production was a very straightforward talk show (and presumably an attempt to recreate the appeal of Parkinson’s BBC series), in which Parkinson interviewed people of the calibre of Jack Lemmon. However it was to be short-lived (as was Parkinson’s 1989 Thames Television series, Parky). Meanwhile back at the BBC, the search continued to find a creditable Saturday night talk show host.

Journalist and presenter of the BBC’s Six O’ Clock News, Sue Lawley had – in recent years – been carving herself out a career as Terry Wogan’s holiday stand-in for his thrice weekly chat show. Although the BBC had encouraged a number of different people to present Wogan whenever the host took a break (including Ben Elton, Joanna Lumley and perhaps most memorably Bruce Forsyth – who even improvised his own lyrics to the Wogan theme), Lawley was deemed the most successful, having – by all accounts – managed to make political luminaries such as Douglas Hurd, Nigel Lawson and Edward Heath reveal a little more about themselves than they would have otherwise.

Given the BBC’s undying desire to produce a late-night Saturday talk show, that although it perhaps could never be described as “high-brow” at least had aspirations towards some kind of intelligent comment, Lawley must have seemed tailor-made for the job. Consequently, in September 1989 came Saturday Matters with Sue Lawley. “The interviewer always has to know when it’s best to keep his or her mouth shut,” observed Lawley at the launch. ” … You can learn more about someone in 10 minutes in a comfortable chair than a lifetime on a hard current affairs seat.” Typical of the series’ aspirations to be something more substantial than your average chat show was Lawley’s attitude to the well accepted (and at the time, much parodied) art of “plugging”: “Well known people who are interesting are obviously going to be more available when they have something to sell. But the modern viewer is a sophisticated animal and overt plugging sticks in the throat. It’s bad television.”

The show’s format consisted of Lawley individually interviewing each of her three guests, followed by (perhaps in a concession to the BBC’s recent history of Saturday night talk shows) an extended section wherein all three guests would take part in an extended free-for-all discussion. “We’ve got all types of people on the guest list,” commented Lawley prior to the first show, “from Eric Clapton to Vladimir Ashkenazy, from Chris Patten the new environment minister, to Kenneth Branagh, from Ken Russell to Cliff Richard – and what we are looking for is a happening. It won’t occur every time but you can sense it approaching, that moment when the balloon goes up. It’s like digging away and suddenly striking gold.”

There was something about Saturday Matters with Sue Lawley that seemed to echo the state of the BBC itself at that time. Director General Michael Checkland and Deputy Director General John Birt had been intent on modernising the corporation. Given (in particular) the latter’s highly out spoken attitude towards the BBC’ s news services, it did not seem too difficult a leap of logic to make to conclude that the increasingly powerful Birt found much of the BBC’s output cringe-worthy and outdated. Certainly Saturday Matters with Sue Lawley eschewed both Sin on Saturday and Saturday Night Affairs old style presentational values, in favour of something a little more self-aware. Lawley worked under the assumption that the viewer already had a firm grasp on the conventions of the talk show and would understand the intelligence inherent in her attempts to bring a fresh, intellectual approach to the format. As a style it seemed wholly disconnected from the traditions of Saturday night television, and also just a little smug.

Next Monday: Can you come up with a good solution for the Murder Weekend mystery?