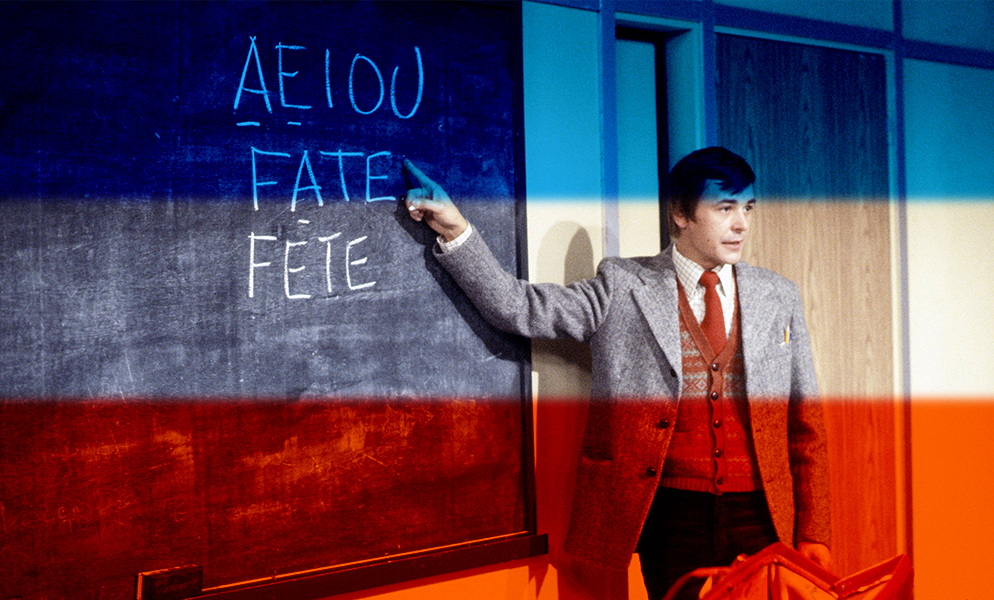 Bob Monkhouse found his niche at the BBC in 1984, but he was not the only one to attain a sense of equilibrium at the corporation. Terry Wogan, primed for mid-week ubiquity was still hosting his Saturday evening chat show as the year began, and was in his stride (although an episode featuring American comedian Joan Rivers was banned in Ireland). This eponymous host’s laid-back approach was attributable to his determination not to be in awe of any of his guests. “I’m not a fan,” he remarked at the time. “Parky was a fan … at least, that’s the approach he wanted to take. I believe you should try to get something different or new from a guest; whether it be amusing or controversial”. This mild sleight directed towards Parkinson (then persona non grataat the BBC due to his defection to TV-am) was no slip of the tongue on Wogan’s part. In an earlier interview that year he had again found the time to insert an implied criticism of the previous “King of Chat show”. “The trouble is,” Wogan mused back in January, “that there just aren’t that many personalities to go round. There is a small group of regulars who come on time and time again – and when you have Billy Connolly on for the fourth time, that’s when you need to start worrying”.

In fact, Wogan had cause to worry (at least a little bit) when a playful chat provoked some strong criticism from the public via the pages of Radio Times. “[Wogan’s] interview with Victoria Principal revealed yet again that his only source of humour is at the expense of some other person who, this time was fortunately a little more primed in social behaviour,” complained one viewer. “The derisive questions about Victoria’s health and beauty regime, about which she is so obviously sincere, made one cringe.” Another felt moved to proclaim themselves “disgusted at the way Terry Wogan treated Victoria Principal. He was intent on slaughtering her right from the start … As for his criticism of little Christopher – only Wogan would stoop so low”.

Wogan was able to muster a half-hearted defence claiming he “could have been a lot harder on her than I was. You can’t please all of the people all of the time. I do an interview my way and Victoria seemed very happy with it. I can’t help it if I think Christopher looks like he’s had his orange juice spiked. He’s a shrivelled little thing and probably 99 per cent of the British public think the same.”

Elsewhere Paul Daniels was enjoying yet another run of his Saturday evening magic show. “Every year I’ve been waiting for the crunch,” he reflected in December 1984, “but now my career is going well and my family are all working together again. Sometimes I think to myself, ‘Hang about, this is all too nice – there’s got to be a valley sooner or later’. You always have valleys in life, but at the moment I’m on the top of the mountain all the time, and it’s terrific.” All seemed to be going well for Daniels, although there was one fly in the ointment: “I’m hoping that Radio Timeschanges its name to imply to the general public that it has television programmes in it. Its present title is out of date.”

Over at LWT, John Birt was brooding. He had just given approval to a new sitcom written by one of the company’s most successful comedy writers. This writer had been recommended to Birt by a head of comedy who had won 11 national and international awards and gained two out of the three nominations for the popular arts category of the International Emmys.

Vince Powell was one of Britishtelevision’s most successful sitcom writers. His work hadn’t often attracted critical acclaim, but it had pulled in big audiences. His ATV sitcom, George And The Dragon (which ran from 1966 to 1968)breached the top 10 most watched programmes for the week on a regular basis, as did his long running Thames sitcom, Never Mind The Quality, Feel the Width (lasting from 1967 through to 1971).

Powell stuck with Thames during the late 1960s and early 1970s, producing work that was always popular, if at times controversial (in particular the massively successful Love Thy Neighbour,which while often the most watched television programme of the week, provoked critical comments).

LWT secured Powell’s services in 1977 for their new sitcom, Mind Your Language.Loosely based on The Education of Hyman Kaplan by Leo Rosten, the notion had occurred to Brian Tesler (then managing director of LWT) that an exploration of how immigrants try to fit in to an alien society could be updated and relocated from the original book’s depression-era America to London in the 1970s. The concept seemed to sit well with the station’s other pioneering multicultural sitcoms (such as The Fosters and Mixed Blessings). However, while neither of those series were a hit for the station, Mind Your Language was a success straightaway. This was actually to the chagrin of Tesler who felt that Powell’s work had missed the point: “It hasn’t moved one step further on from the pilot,” he complained in a January 1978 memo to Michael Grade. “In fact, it’s moved backwards: the premise is no longer credible (the characters) all talk in perfect colloquial English until the lessons start): the facile mispronunciations are no longer part of the gag, they are the gag”.

A campaign sprang up with the industry to have the series pulled. At the 1978 Edinburgh Television Festival, Grade came under sustained attack from contemporaries who viewed the show as racist. Even though Mind Your Language was attracting a record audience for an LWT comedy of 18 million, it was cancelled after its second run (much to the relief of Tesler). However, Mind Your Language would return for a third series in 1985, this time produced by an independent production company. While Granada Television aired all 13 episodes, LWT declined to transmit any.

Powell returned to Thames Television for his 1977 sitcom Odd Man Out (starring John Inman in his first major role since Are You Being Served). The series failed to engage with the audience, but Powell’s next effort (A Sharp Intake of Breath) – this time for ATV – was far more successful, running from 1978 to 1981. Back at Thames in 1981, he began to write for Johnnie Mortimer’s Never The Twain, a – robust sitcom about warring antique dealers which embodied the classic Powell format (a clash between neighbours with opposing outlooks on life) and proved immensely popular (attracting 15.1 million viewers at its peak in 1981). This was followed up by yet another clash of cultures sitcom in 1982 for Central Television (Father Charlie).

Next Monday: I shouldn’t have accepted it