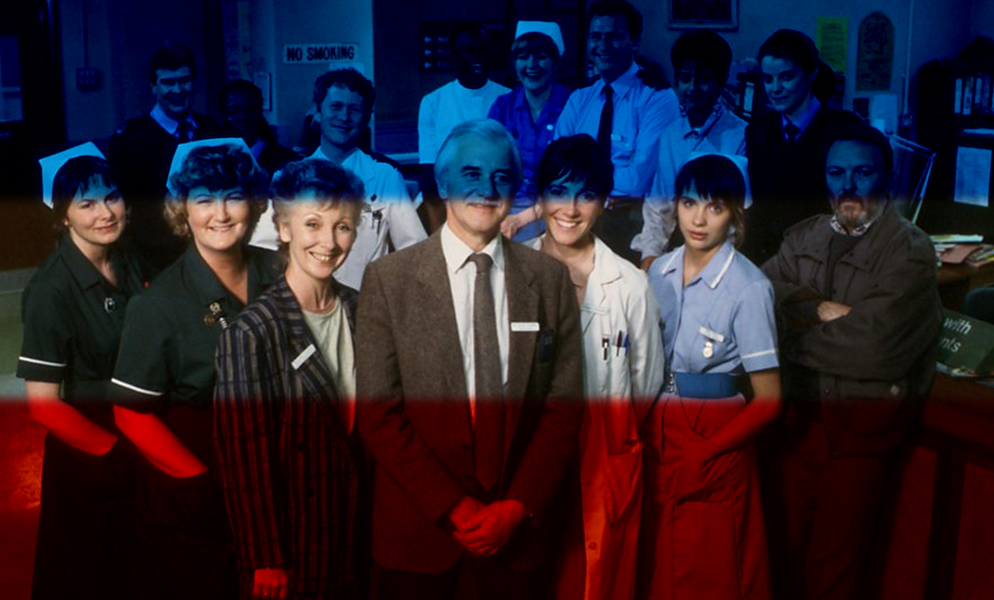 “Death is part of our business whether we like it or not, and somewhere along the line we have to compromise.” So proclaimed Casualty, returning for its second trail-blazing year on BBC Saturday nights. Written by series creators, Jeremy Brock and Paul Unwin, the first episode of the new run, seemed – almost belligerently – to continue to hammer home the duo’s fears about the Health Service. But broadcast at 7.55pm (right after The Russ Abbot Show), Casualty attracted the ire of a number of viewers.

While some would criticise it for portraying needlessly pessimistic views, the series also provoked comments for its authenticity. “You’re called to a coronary and immediately the wife will say, ‘My husband’s upstairs – you’ll need a stretcher.’ And she’ll get quite upset when you produce a chair instead,” commented Clive Haddrell, a Casualty adviser and a training officer for the Avon ambulance service. “Stretchers never go up stairs, it’s too dangerous, but people have seen that on TV, so they believe anything else is incorrect. And they can get quite irate when they think you’re denying them what believe to be proper procedure.” Almost all of Casualty’s medical advisers would, at one point or another. express anxiety regarding the representation of their profession in the programme. Peter Salt, the charge nurse at Bristol Royal Infirmary appreciated Casualty’s willingness to paint a harsh picture of the NHS, but in 1987 was worried that the programme might negatively impact the public’s confidence or readiness to go into an Accident and Emergency department should a real emergency occur.

Haddrell too, was convinced that series such as Casualty could cause serious harm. In particular he believed the way television dramas tended to deal with overdose cases (in which the patient is usually made to walk around while they are slapped on the face to keep them awake) was highly irresponsible. “[It’s] completely wrong” he bemoaned “the drugs just get into the system quicker. One of the first, most important lessons I had to teach the cast was to get them to calm down. At first they were all dashing about and roaring off blue lights flashing and I had to say, ‘no, no, no that’s just not how we do things’. I had to be quite firm. The injured want to feel you are in control. The injured person is often immobile and very sensitive to what’s going on around them.”

Regardless of how much the experts or the viewers worried about Casualty’s authenticity or its unremitting bleakness, its gradually growing popularity encouraged the BBC to broadcast another highly realistic and pessimistic hospital drama on Saturday nights. Shown at 10:30pm on the 21 and 28 March, The Houseman’s Tale was based on the novel of the same name by Colin Douglas. It dealt with hospital politics and, in particular the way in which patient welfare often seemed to come second to lucrative research. To Douglas, the medical dilemma was that “to be effective and be sympathetic as well is pretty difficult. In order to function at all the hospital doctor has to some extent to be desensitised, but at the risk of being insensitive.”

Although the novel had been written some 13 years previously, it was clear that Douglas’ perspective was very similar to that of Brock and Unwin’s.

Encouraged by drama producer Tom Kinninmont (who would go on to produce the memorable 1999 one-off drama Jeremy Bernard is Unwell featuring Peter O’Toole), Douglas spent some time watching a number of TV plays before attempting to adapt The Houseman’s Tale for television. He was assisted in this process by director Alastair Reid (who had previously worked on Emergency – Ward 10) and the end result – shot in a decommissioned hospital near Kilmarnock and featuring a large number of actual trained ward staff – was even more authentic than Casualty. “The Houseman’s Tale is not recommended viewing for the squeamish,” warned Radio Times. “In the first instalment a bone marrow sample is taken before our eyes (with amazing results), a blood sample is spilt all over the patient’s bed and a cardiac arrest is unsuccessfully treated. It’s all a far cry from the sanitised, romanticised view of hospitals we are used to on the TV screen. The humour, and there is plenty of that amidst the medical details, is of the distinctly black variety. It is one of a number of survival mechanisms employed by overworked houseman in the face of stark reality.”

“My doctors were decent enough, though broadly but not uniformly imperfect, and in the lay press the book got good marks for realism,” remembers Douglas. “Then it was savaged over a full page in the British Medical Journal by a senior house officer in Lancashire whose main point was that this sort of stuff is all very well among ourselves, but not, please not, in front of the patients. I thought about that, and disagreed: the patients as public were paying for it all and had a right to know, and sadly no real right to expect perfection.” As we already discussed, Casualty would move away from attempting to expose the realities of the NHS, and the BBC would arguably steer well clear of the subject until the arrival of the stunningly visceral Cardiac Arrest in 1994. “But I sometimes wonder what my tense young critic of 25 years ago is making of more recent fictional portrayals of medicine,” muses Douglas. “Did Jed Mercurio’s Cardiac Arrest give him exactly what it said on the label?” Undeterred Douglas has continued to write novels set in the world of medicine including Hazards of the Profession in 1987 and Sickness and Health in 1991.

Next Monday: I was in obscurity until this series