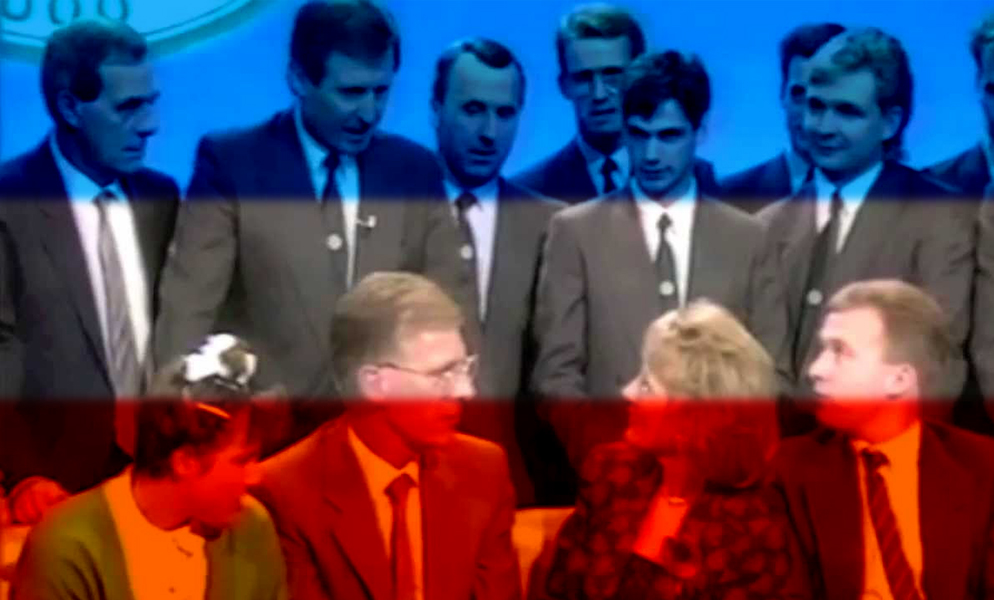 Cissie Charlton made the trip to London all the way from her home in Ashington. The pensioner thought she was going to be attending a recording of Wogan, but instead, thanks to her generosity in teaching football to eight and nine year old schoolboys, she was to find herself the recipient of the first ever “Hearts of Gold” award. The deception used to bring her to Television Centre was par for the course for Esther Rantzen’s latest “people show”.

Hearts Of Gold was described by Radio Times as “an antidote to the swindles and injustices spotlighted on That’s Life!, Hearts of Gold is about courage, kindness and caring.” That’s Life!had originally been a Saturday night staple, until 1976 when Brian Cowgill (then Controller of BBC1) moved it to Sundays. Hearts of Goldwas an odd choice for a primetime Saturday evening series – even ITV’s Surprise Surprise was scheduled on Sunday nights.

“In 1988, when I knew Michael Grade was looking for a new Saturday night show for BBC1, I sent him a one-page format that I called Hearts of Gold,” explains Esther. Her inspiration came from a number of different sources. First and foremost was a famous item on That’s Life!, in which Esther re-united Nicholas Winton (who just before the Second World War had organised a train to take Jewish children out of Prague to escape the Nazis) with a number of the people he’d saved. “For the first and only time in the history of That’s Life! I sat for a moment in silence, then turned in my chair and left the stage. My eyes were filled with tears, I couldn’t speak. The heroism of this quiet man had taken my breath away.”

Not long after, Esther attended the memorial service for Russell Harty, a popular television presenter who was hounded throughout much of his career by critics who hated his programmes, and journalists desperate to dig into his private life. “Alan Bennett delivered the address, a piece of writing so affectionate and yet so filled with controlled rage at the way Russell had been made to suffer, that in the end the congregation gave him a standing ovation. I went home thinking that all too often the British, reticent nation we are, pay fulsome tribute to people only after their death, when it’s too late.” Finally, Esther chaired a Radio 4 phone-in during which ordinary people were invited to call in to praise others who they felt had either shown great courage or acted in a kind manner. “It made a wonderful programme,” Esther remembers, “an antidote to all the bad news that filled the media.” All of these ideas coalesced into the format that evidently appealed to Grade.

While the main thrust of the series would be to spring surprises on kindly or brave ordinary folk and award them with a “Heart of Gold,” Esther still found a place in her new format for some of her patented vox pop sequences. Here though, instead of attempting to get Britain to sing, Esther would carry out what she dubbed her “Good Samaritan Survey”. This would consist of her going out on the country’s high streets and pretending to fall over to see if any kindly passer-by would assist her back to her feet, or perhaps dropping her ring into a fountain in Nottingham to see if anyone would help her retrieve it. “These things always seem a good idea in the warmth and comfort of an office. It’s probably the daftest thing I’ve done since I sung on stage in Bognor as Dick Whittington,” exclaimed Esther in 1988.

The series proved to be popular, particularly with Esther’s heartland audience who responded to a 20-second plug for the show on That’s Life! with 600 letters suggesting friends or family members who they felt should be awarded with a “Heart of Gold”. “I will never forget the people I have met making the programme,” commented Esther in 1989. “So the next time you read venomous stories, or depressing reports that make you wonder why humanity has been preserved on the planet, do spend a moment or two meeting our unsung heroes or heroines. I find them inspiring – I hope you will too.”

Originally presented by Esther and That’s Life! “nancy” Michael Groth, Hearts Of Gold would get through a swathe of presenters until its cancellation in 1995 (including Mike Smith, Carol Smillie and Micky Hutton) and would find itself eventually, moved from Saturday evenings to Sundays (where it seemed more at home somehow). The series remained an acquired taste with many finding it a combination of hectoring and saccharine television at its worst, but for others it was a genuinely uplifting programme. Indeed Hearts Of Gold seemed to provoke strong reactions in those who became involved in it too. “Time and again, while we were researching a story, someone would drip poison into our ear. ‘Don’t give your award to him, he hasn’t really achieved anything’. Or: ‘Don’t give it to her, she’s stolen the credit, but she’s really done nothing.’ Invariably our researchers discovered that the ‘hearts of stone’ were motivated by jealousy. Once a volunteer working for a charity was so incensed that we were going to honour the founder that she gave the secret away, in the hope that when it leaked out we would cancel the programme. We did indeed cancel it, although we found a different way to honour the founder in a subsequent show.”

While Hearts Of Gold might have seemed a strange programme to broadcast in Saturday primetime, 1988 would also see ITV broadcast a number of different, sometimes highly inappropriate dramas on Saturday evenings. Philip Hinchcliffe’s Bust looked to be perfect though. Featuring actor Paul Nicholas (who was still riding high thanks to the popularity of his character Vince Pinner in the BBC comedy Just Good Friends), as loveable rogue Neil Walsh (not a million miles away from his Just Good Friends character) the series first began in 1987 and was deemed popular enough to return for a second outing in 1988. Less conventional was Central Television’s The One Game. On the surface this four-part drama concerned the plight of successful computer businessman Nick Thorne (played by Stephen Dillon), who found himself subjected to a complicated revenge orchestrated by his ex-business partner Magnus (Patrick Malahide). However, as the drama unfolded it became clear The One Game was intended to be a partial modern re-telling of Arthurian legend.

“I had in mind that Nick was King Arthur and Magnus was Merlin the Magician,” explains The One Game’s writer John Brown. “On this level the action of The One Game shows what would happen if Arthur said to Merlin after he’d helped set up the Kingdom, ‘Get lost. I don’t need you anymore.’ In The One Game Nick gets rid of Magnus once the games company is established. That’s why I called Nick or Arthur’s wife Jenny or Guinevere. Fay is Morgan Le Fay and Jenny’s boyfriend is Gavin or Sir Gawain.”

“It is a most entertaining piece and very unusual,” reflected Malahide at the time. “As the story progresses, it becomes clear that Magnus is trying to teach Nick a lesson because he feels he has lost touch with himself.” The fantasy thriller elements of the series were particularly relevant to the drama’s overall success. While there had been a recent tradition of telefantasy dramas playing out on a Saturday night (Tripods, Doctor Who and Robin of Sherwood spring to mind), the production team recognised they had to strike the rogjt balance between the fantastical and realistic. “We had to make sure everything that happens in The One Game could occur in real life,” recalls producer Deirdre Kerr. “We wanted to ensure that we didn’t slip off into something like Star Wars.”

The One Game didn’t prove to be a success, proving yet again that telefantasy generally failed to cut it on Saturday nights. Yet, The One Game has been able to achieve something that series such as Bustprobably never will; critical re-evaluation. In 2003 the series became commercially available on video and DVD, allowing a new generation of viewers to familiarise themselves with one of ITV’s more worthwhile excursions into the realms of telefantasy.

In their review of the television year, The Guardian commented in 29 December 1988 that “all the omens were there. We lost wrestling and Crossroads and Miss World and got Sumo, Dockland drama and Kylie Minogue twice a day … Alternative comedy, having desensitised us, had nothing much new to say … you could not call it a vintage year.”

Next Monday: 1989: We just weren’t allowed into UK terrestrial television