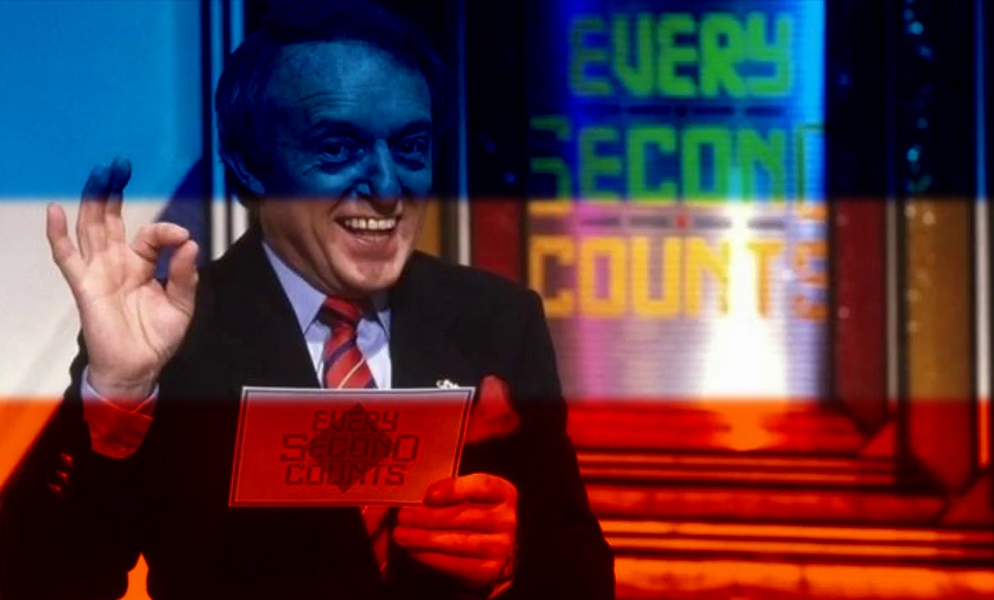 Game shows, having been slightly overshadowed in the middle and later years of the 1980s by the endless stream of ensemble comedy shows were on the verge of making a concerted comeback in the early 1990s. Leading the charge was TVS’ Catchphrase. Although a relatively straightforward and low-budget series (consisting simply of two contestants attempting to decipher phrases animated on a large screen), it was bizarrely popular. Having started on Sunday nights in 1986, the series had oscillated between Saturday and Sunday nights ever since, with little detriment to the ratings. It attracted up to 13 million viewers in its first year and surpassed that in 1988 when it was first switched to Saturday nights and was watched by as many as 13.8 million viewers. By 1990, Catchphrase was still regularly attracting in excess of 12 million viewers and by this time had notched up an impressive 100 editions.

“I love it,” host Roy Walker commented at the time. “Sometimes I do an interview and they say: ‘Well, you’ve really sunk to the bottom, haven’t you, being a game show host.’ But I hold my tongue. The show is great fun and it’s given me a lot.” The previous year Catchphrase had provided Walker with a much-needed focus in his life when he recorded a number of episodes the day after his wife Jean died from cancer. “I’ve learned that I have a future as a comic because people want me. That’s what keeps me going. I can’t imagine ever wanting to marry again. I’ll never find anyone as good as Jean. But as long as the work’s there, I’ll keep on telling jokes.”

“You have to bring out the best in each of the contestants while giving a performance yourself,” Walker explained. “It’s all ad libbed. The humour is spontaneous. There are some wonderful moments. We had a posh couple on and the catchphrase was ‘windbreaker’. The clue was the word ‘wind’ being broken by a hammer. The lady buzzed and said in her most uppercrust accent, ‘Breaking wind’. Of course, everyone fell about laughing and she didn’t know what she’d said. I turned to her husband, and said, ‘Have you got an alternative to that?’ Then I realised what I’d said and told him we’d better forget it. He said: ‘I’m awfully glad about that.'”

Clearly, one of TVS’ most profitable series, a large number of episodes would be made over the next few years, the series – in its TVS incarnation – would outlive the station that made it by a number of years (TVS would lose its franchise at the following year’s awards) and continue to pull in creditable ratings for some years to come.

Like Catchphrase, the BBC’s Every Second Counts had in its own quiet way been doing decent business for the corporation for a number of years. It too had started in 1986. It was presented by Paul Daniels and its origins dovetailed with a period in which his magic series was at its zenith in terms of creativity and popularity. In 1987, Daniels had performed arguably his most memorable illusion to date. It took place on a Halloween special which ended with a supposedly botched escaped attempt from a cabinet known as an “iron maiden”. The idea was that Daniels would have only a limited amount of time to escape from a metal cabinet before its door of large, sharp metal spikes was slammed shut. The production was deliberately shot so the audience at home were led to believe the magician had really perished while performing the trick. He recalls, “I was asked to create a similar reaction to the Orson Welles radio event which created a panic in the USA. I designed a double whammy illusion. All week long I escaped from the box. On the night I didn’t. This gave it absolute total reality. All those around the box and on the floor knew nothing of what was about to happen. It blocked the switchboards for three days.”

Paul Daniels move to game shows came about after he resisted the BBC’s requests to make more magic shows. Fearing that overexposure would dilute the appeal of his tricks, Daniels, by way of compromise agreed to diversify instead. “Odd One Out was the first, later Every Second Counts and finally Wipeout,” he recalls. “So many of the other game show hosts told me that they though Every Second Countswas the finest format of all the game shows that were on air. It certainly built up the tension and worked towards an exciting climax.”

Couples were picked to appear on Every Second Counts from a total of 10,000 applicants, and interviews held at 22 different centres throughout the country. “I look for outgoing couples who are going to enjoy themselves and have fun,” explained the show’s contestant researcher. Once chosen, the contestants would have to wait approximately five months before their day in the studio would come. That day would last typically seven hours, starting with an informal greeting from the presenter himself (“Never forget that I’m a sex symbol,” Daniels would josh when meeting the nervous contestants), followed by lunch (during which alcohol would be strictly prohibited) and a screening of a previous episode to get everyone in the mood.

A researcher would then take the contestants through their biographies (or as Daniels himself would sometimes unhelpfully refer to it “all those lies you told us to get on the programme”) and this would then be followed by a coaching session, in which Daniels would advise contestants on how to behave during the recording. “You must treat me like a deaf old twit though I’m only two feet away. If you think you’re freezing, look straight into my eyes and everything will be alright, that’s a promise. Don’t go for long drawn-out stories or I’ll drop off. Give it some welly: I want you to win … well it isn’t my money.”

Rehearsals took place from 4 to 5pm and then the actual recording would take place from 7.30 pm onwards. ” I think that more experimentation should be done with people from the world of entertainment to see what they can do,” pondered Daniels when asked of his thoughts on being a game show host. “Many comedians have become known as great actors, the reverse is not true. Some comics, who do not interact with the audience but stand and deliver the lines, no matter how well they do that, cannot run a game show comfortably. The worst at running game shows are journalists, either from the paper media or the TV news. They have no sense of spoken word timing or delivery and, oddly, never improve. All the game shows I did were ‘worked over’ by me to fit me.”

In respect to his place in the Saturday night line up of the early 1990s, Daniels remained, on the surface at least, oblivious as to where he fitted in: “I had to stop watching TV shows. I have a natural sense of mimicry and suddenly found myself sounding like Eric Morecambe, for example. So I stopped”. However, this is not to say he does not hold opinions on what he deemed to be successful, or rather unsuccessful forms of entertainment. “It is easier to say what I did not like, which was stuff like Python, which I just found to be childish and stupid. For me there was no skill in it.”

Every Second Counts would run reasonably successfully for another few years, finally winding up in 1993. Looking back it would seem that Daniels felt he became another victim of the change in attitude that wiped his BBC stable mates Little and Large off our screens. In 2000 he accused the BBC of “abandoning traditional shows and transmitting ‘young’ comedy with ‘naughty’ words that drove away the older audience.” However by 2003, he had seen fit to re-diagnose the situation. “The Saturday night myth was, to me, a real oddity,” he explains. “I got far more mail from the Tuesday night repeats. I do think that instead of merely accepting the figures from the pollsters, the BBC and ITV should have carried out their own full-blown research. On Mondays, for example, you can get a seat anywhere or a drink in any bar or club. They are empty. On Saturdays theatres, pubs and clubs are packed. Many thousands are out at sporting and similar events and on their way back. Yet they say more people watch on Saturdays than on Mondays. I have never believed it.

“With regard to ‘Variety’ shows – they stayed with the old format for far too long, with old crooners and the like. I did a show in Spain not too long ago and they still have such shows where they mix in the latest pop stars with the older pop stars and intersperse them with comedians, sketches, jugglers, magicians etc. Over here we still have variety but it is spread out: all the singers are in one show, all the impressionists are in another show, all the comedians are in another show … and so on. Another oddity is that, as most of the viewing audience is older, the TV executives do not recognise nor want to entertain that market. This is, perhaps, understandable with a channel funded by commercials (where they say they cannot influence the older market buyers – and that in itself is an admission of inability) but it is ridiculous in terms of the BBC, who should always have been independent of commercial forces and tried to be the market leader, not the follower.”

Next Monday: That’s the last thing I was expecting, Jim