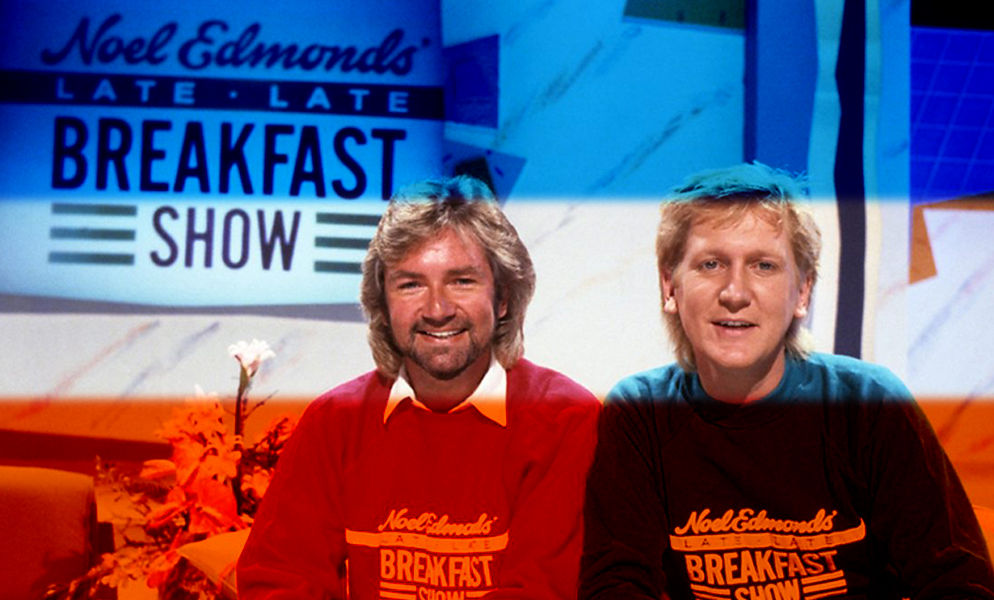 A balmy early summer’s evening in 1982 saw the stars gathering at Thames Television’s Teddington studios. As the celebrities arrived and dutifully filed inside, the setting sun dappled on the surface of the nearby river. The occasion was the annual TV Times Top Ten Awards. This year was to be a night with a few surprises.

Not for Terry Wogan though. He picked up the award for Favourite Male TV Personality for the fourth year running. Co-host Michael Aspel, however, was surprised when he found himself the recipient of the contents a glass of champagne, mistakenly thrown in his direction by co-host Joan Collins. However, even he could not have been as shocked as Sarah Kennedy who, in the space of 12 months, had made the transformation from serious news reporter to Game For A Laugh presenter and beat both Barbara Woodhouse and Judith Chalmers to win the Favourite Female TV Personality award. Judi Dench was Funniest Woman on TV and The Police were named Favourite (Pop) Group on TV. The night’s most fiercely contested award though was that of Favourite Children’s Television Personality. Rod Hull managed to win more votes than Jon Pertwee, but bestriding them both was the presenter of the BBC’s flagship Saturday morning television programme The Multicoloured Swap Shop – Noel Edmonds.

In August 2000, Edmonds was moved to assure us “I’m not a paedophile. I’m not a mass murderer”. Born on 22 December 1948 in Ilford, Essex to parents Dudley and Lydia, Edmonds was an only child who found it difficult to mix with his schoolmates at Glade Primary School. “One of the biggest weaknesses I have,” he reflected in 1999 “is that I’m desperate to be liked”.

He has enjoyed one of the longest runs of any entertainer in the BBC’s early-Saturday-evening slot, and with Noel’s House Party created (in his words back in 1999) “the most successful light entertainment show there’s ever been, and probably ever will be. No other entertainment show has sold around the world, made millions for the BBC in merchandising, spawned a character that was loved or loathed and had the fastest-selling video and the fastest-selling record of all time.”

However, back in 1982, Noel Edmonds was a loveable entertainer, affiliated with Radio 1 and BBC1’s Top of the Pops, and beloved of children and teenagers to whom he had brought some much needed Saturday morning entertainment in the shape of The Multicoloured Swap Shop. Like Tiswas, Swap Shop appealed to an adult audience and made a virtue out of the fact it was broadcast live. Where Tiswas put great stock in its anarchic content, Swap Shop followed a more responsible path. That is not to say it was in any way less groundbreaking than its ITV counterpart. In fact, a poll of television professionals conducted in 1999 identified Swap Shop as one of the most influential television programmes of all time. “All I had was a running order; there wasn’t much script,” remembers Edmonds. “We used to get the crew to join in – it’s common now but back then it was radical stuff. I remember one of our technicians was disciplined because he forgot where he was and laughed out loud on Panorama!”

Launched on 2 October 1976 and initially scheduled to run for just 13 weeks, Swap Shop was a major success drawing in, at its peak, 10 million viewers per week. While this was due to the programme’s innovative format, it took a presenter of Edmonds’ calibre to make a programme as complicated as Swap Shop work. It was therefore little surprise when much of the praise showered on the programme was directed at him. Co-presenter Keith Chegwin recalls that Edmonds’ ego was already inflated even before the first episode. “I wandered over to Noel,” recalls Chegwin of his first encounter with his co-presenter “and we had a very brief chat, after which he asked if I had a pen and paper so that he could give me his autograph. I was utterly gobsmacked”. Nonetheless, on screen Edmonds and Chegwin, along with other regular co-presenters, Maggie Philbin and John Craven formed a tight-knit team that spanned the programme’s six-year tenure. “Really successful television generates in the viewer a sense of ownership,” explains Edmonds.  “If you can do that, you’ll have a hit … (Swap Shop) was the beginning of my realisation of the power and significance of that.”

While it is unlikely that Edmonds’ decision in March 1982 to depart Swap Shop in search of Saturday evening success was inspired by Chris Tarrant’s actions a year earlier, there is a sense that British programme makers were realising that some of the most dynamic and innovative television of the day was being broadcast under the aegis of children’s programming. Edmonds, like Tarrant, had recognised this and was keen to exploit the fact. The success of ITV’s Game For Laugh, which had so taken the BBC by surprise, suggested that now was the time for the BBC to invest in something new. Game For A Laugh was drawing in audiences by offering a variety of items within one programme, all involving members of the general public.

In many respects the nearest thing the BBC had to that kind of programme was Swap Shop. “Live television is my strong point. I’d like to stick with it,” Edmonds remarked on his 1982 departure from the programme that had served him so well. He then added what seemed to be a veiled threat: “I’ve always been a BBC man, but if ITV came up with the right idea I would consider swapping channels”. The BBC, keen to keep one of their best talents, offered Edmonds a role as presenter of the upcoming Breakfast Time. He declined, and did so publicly, ensuring everyone knew how important he was in the eyes of the corporation. Tempting as the offer might have been, Edmonds elected to hold back and wait for the prize he really wanted – a primetime Saturday evening show. “I’ve always been ambitious, I’ve never made any secret of that,” he says. “I wanted to have as long a career in television as possible and I realised that there was a plane coming past and I ought to be on it.”

Next: “Whatever they do, we can do it better”