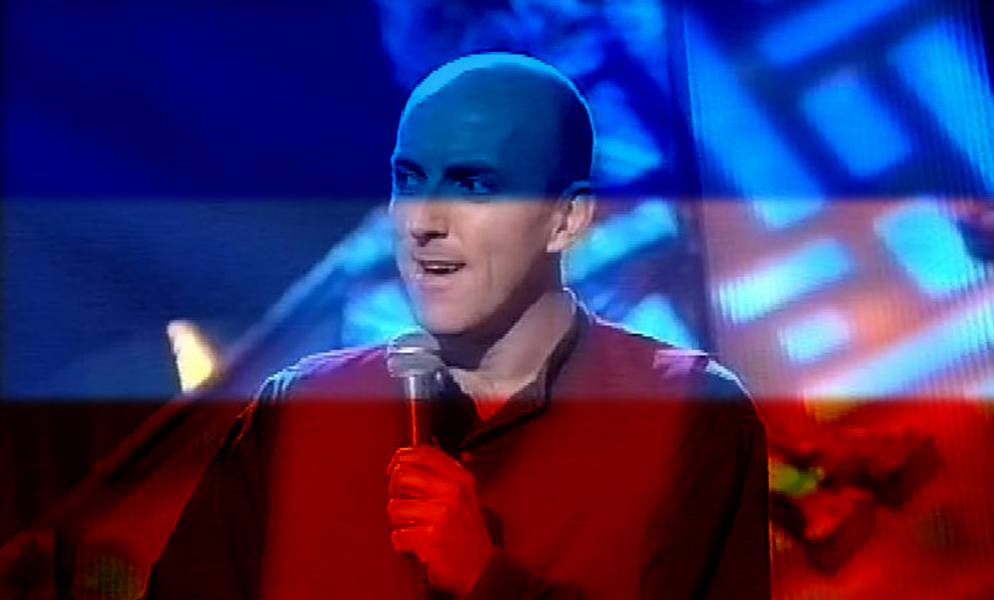 With ITV accused of broadcasting “juvenile rubbish” on Saturday nights, what would they offer up next? The hugely intellectual Man O Man, of course. An international format, Man O Man had been trailed in advance of its arrival on British screens as quite the oddest entertainment show ever seen. The format was almost insultingly simple – each week 10 young men would parade in front of a 300-strong, all-female audience, who would vote for their favourites over a number of rounds. Those who failed to come up to scratch would be pushed into the on-set swimming pool. Presiding over events, walking around with his hand in his pocket throughout, was Chris Tarrant, who announced in the Radio Times while plugging the show that “Judging by the time I’ve spent watching foreign television for Tarrant On TV, I’d say (British TV is) nowhere near as tacky as most European countries”.

John Peel, reviewing the programme in the same issue, had a different view on proceedings, suggesting “Fast Show fans may well be reminded of some of the production values of Channel 9”. Peel also admitted “I couldn’t bring myself to watch the concluding rounds of Man O Man, despite the promise that Chris would ‘draw on his legendary skills to bring contestants and audience together while building the excitement and tension to a crescendo’”. You didn’t have to be Roy Hattersley to find the whole thing risible and depressing. Neither Richie nor Tarrant could make a success with love on a Saturday night, though both would return to the arena later.

Bad luck seemed to dog ITV on Saturday nights in 1996. A new series of International Gladiators was no doubt considered a ratings banker, but even this proved unsuccessful – thanks to all the British competitors falling at the first hurdle, meaning unknown, foreign contestants and Gladiators were battling it out each week, to massive UK apathy. A swift rescheduling to a late afternoon slot followed. Bob Mortimer summed up much of the public’s view on ITV’s weekend offerings on TFI Friday around this time, quipping “Well, it comes to something when Stars In Their Eyes comes on and it’s a relief!”

Still, unbowed from Jack Dee’s failure six months previously, the third channel kept chasing after that elusive young audience, and in June 1996 sanctioned a revival of Saturday Live, the hugely influential Channel 4 series of the mid-eighties. Broadcast each week at 10pm, it was hoped this new version would become as much of a must-see as its predecessor, but it resolutely failed to take off. Lee Hurst was selected as host – 12 months previously a complete unknown, but now a star thanks to his appearances on They Think It’s All Over. Regular guests included Harry Hill and Armstrong and Miller, with many other big names from the stand-up circuit and music scene. But by 1996, stand-up shows were all over TV, and there was nothing on the new Saturday Live to make it stand out.  In fact, it alienated much of the older, more established ITV audience. Hurst was also rather uninspired as MC, continually introducing all of the acts as “a great mate from the circuit”. In the penultimate episode, Hurst invited the audience to “join us next week for the last ever Saturday Live … er, well, maybe not the last ever”. It was.

However, come July, ITV finally managed to find a series that was at least a marginal success after nearly 12 months of trying. The Big Big Talent Show did exactly what it said on the tin – new comedians, singers and novelty acts offered up for the public’s vote. Jonathan Ross, whose career had stalled at ITV, was an adept host, and the likes of Ed Byrne, Gina Yashere, Omid Djalili and the overall winner Paul Zerdin made early television appearances. The show was also broadcast live, and the viewers could have their say via phone, fax or postcard. It wasn’t particularly inspired, but for the first time in ages it managed to beat the BBC opposition – albeit coverage of the Olympic Games rather than some of the usual big guns – and so was the most successful new show of the year.

However one fairly successful new series couldn’t disguise the hapless flailing at Network Centre, still reliant on ancient formats like Blind Date and Family Fortunes. If they couldn’t find anything new, they’d have to hope that the BBC suffered from an equally poor run of form – and as luck would have it …

Next Monday: He gives us our spirit of unity; we’d all like to strangle him