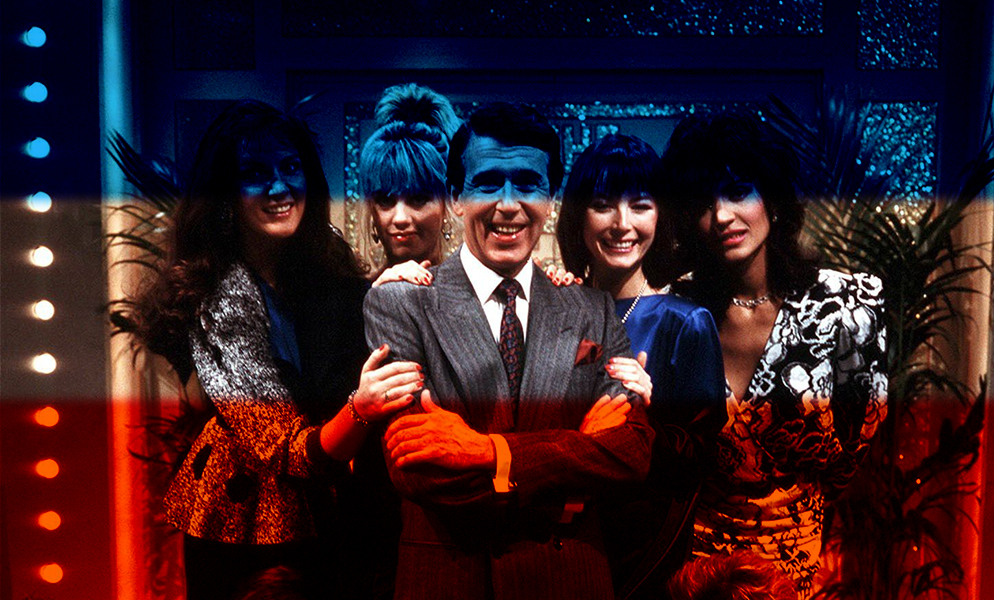 Leslie Crowther was born in Nottingham in 1933. In 1946 he found his way into the BBC Schools Repertory Service and in 1960 landed parts in both The Black and White Minstrel Show and Crackerjack. From there he progressed to his own comedy sketch series, Crowther Takes A Look (1965) and continued to produce the occasional sketch show or sitcom for the next seven years. In 1972, he starred in the highly successful ATV sitcomMy Good Woman. ATV would continue to provide the comedian with occasional work right up until its demise in 1982. In 1978, Crowther began to branch out, taking over as presenter of the Thames Television quiz show Whose Baby?and embarking upon a long-running and famous television advertising campaign for Stork margarine. However, by the late 70s and early 80s work begun to dry up as Crowther entered what he would later refer to as his “Doldrum years”. “It seemed to me that my TV career was on the brink, with me hanging on by my fingernails,” he remarked.

In 1984, game shows were becoming ever more important to the television schedules. In the autumn of that year 11 game shows were broadcast that achieved audiences of 10 million or above, and in one week in December 1984 over 15 hours were broadcast with seven hours alone screened by ITV at the weekend. The Price Is Right (which offered the prospect of presenting a 60-minute game show running over Saturday peak time viewing) represented a significant career opportunity.

On 17 February 1984, Broadcast announced: “The price must be right, it seems for Central to have lured Leslie Crowther into hosting its new game show. The last one he was connected with was the competitions section of Crackerjack some 24 years ago. But the company might have been a bit desperate, too; after all they’d announced that Russ Abbot was going to do the job when he publicly thought better of it, and several other unsuitables had better made pilots. Producer William G. Stewart has been taking American tapes of the original format round major cities and says he has been inundated by people wanting to take part. Not, presumably, rejected host Joe Brown and Mike Reid though.” After a successful audition, Crowther was the man Central wanted, at a stroke spelling the end of the entertainer’s doldrum years. Not that the series didn’t come without risks, Crowther was anxious at taking the helm of a show many in the public still considered as having been rejected by Russ Abbot and Joe Brown, and reminded TV Times reporter Stewart Knowles that careers, as one critic put it, “have been blighted by a public failure as a game-show host”.

“Like most good game shows, The Price Is Right was mathematical in its precision and pace,” recalled Crowther in 1995. “I had to learn to describe briefly, clearly and accurately 25 different games, which were chopped and changed around to give each show variety. The audience comprised nine coachloads of people who arrived at Central Television’s Studios in Nottingham from all over the country. As they queued up to enter the studio, each one was given a sticker on which his or her name would be written, with a number to stick below it. Once they were seated in the studio, Bill (William G) Stewart, who had been a Butlin’s redcoat in his youth, would perambulate through the audience and proceed to chat them up. What he was looking for was a mixture of characters – white, black, yellow, spinsters, widowers, dolly birds and gigglers from whom he could pick four men and five women to Come on Down into contestants’ row”.

The show itself was relatively simple, recycling rounds a couple of times. The opener would involve contestants attempting to estimate the cost of a particular item without exceeding its actual value. The contestant whose bid was closest to the actual price would then go on to play a further game with Crowther, and dependent upon their performance, would be either disqualified or placed on hold in preparation for the show’s end game. This process was repeated until six contestants were chosen to compete inthe Price Is Right’s big finale – “the showcase final”. Here the contestants were allowed to choose a prize from a bevy of big money options that would be presented before them. The task at hand was simply to estimate the total value of the showcase. The contestant with the closest guess would walk away with their chosen prize.

While not the most original, or enthralling format for a game show ever devised, the Price Is Right stood out from its competitors by dint of its extraordinary studio audience. “[Each] coachload was hoping that one of their party would be chosen,” explained Crowther. “In this way you got marvellous audience participation – they loved it when someone they knew was in contestant’s row, asking them quite blatantly the price of an article, or whether they should keep or discard a prize. The noise of an entire coachload of voices yelling advice was hard to describe – people would also write signs in the air as a prompt – they were usually wrong! Never before has a studio audience behaved with so complete a lack of inhibition – it was like a pantomime.”

In order to sustain the heightened nature of the audience, Producer William G Stewart would begin recordings by marching around the studio dressed in a lurid pink tracksuit while “Land Of Hope and Glory” blasted out of the studio speakers. When the show began, there was no preamble, no introductory chat from the host. “I said to Leslie, ‘Let’s get straight into this, the first thing you say is ‘Mary Brown, Come On Down’.  And we don’t lose any of the momentum that we’ve built up with those opening shots of the audience going wild,’” reflects Stewart.