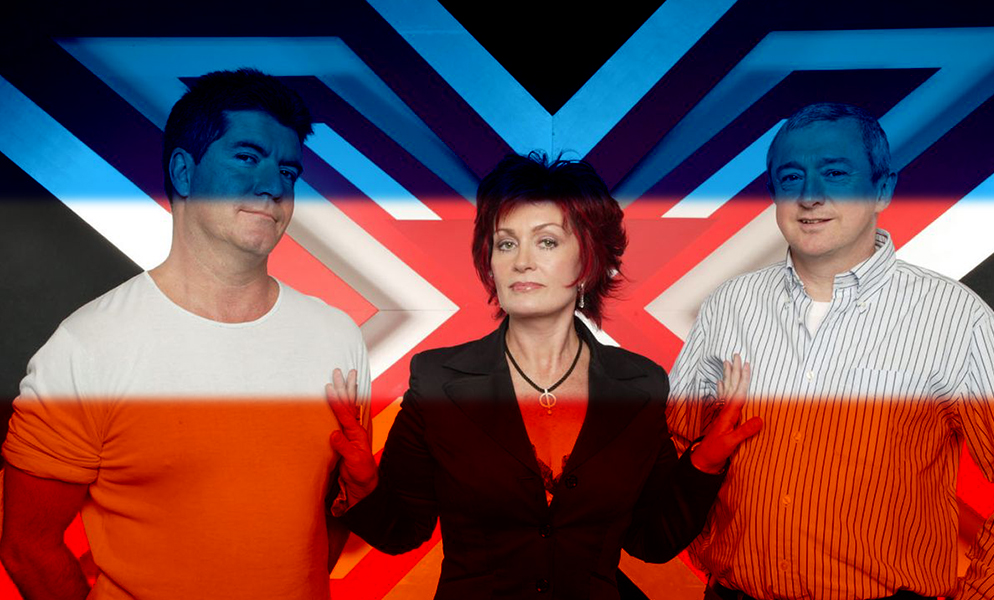 For the fifth year running, ITV’s major commission for winter Saturday nights in 2004 was a musical talent search with a record deal at the end of it. Although a new format, The X Factor was a familiar affair – almost a reality show “greatest hits” package. At the centre of was Simon Cowell, having signed a “golden handcuffs” deal with ITV, who had devised the format through his SyCo production company.  He was even credited with composing the theme tune.

Joining Cowell as a judge were Louis Walsh, as previously seen on Popstars: The Rivals, while the host was Kate Thornton who had fronted the ITV2 spin-offs from Pop Idol. The one new face in front of the camera was loose cannon Sharon Osbourne, most famous for being the wife of Ozzy, but also a veteran music manager of many years. The hope was sparks would fly between the opinionated panellists.

The X Factor‘s big selling point, however, was summed up by the Radio Times as being “Pop Idol – for grown-ups!” Unlike its predecessors, there was no upper age limit for hopefuls and absolutely anyone could enter if they thought they were in with a chance. The hope was this would offer more human-interest stories – as Osbourne said, “There have been a lot of women who have moved me. A lot married young, had their children and set aside their dreams. Now their children are grown up, they want to pursue their dream.” Yet there was undoubtedly another reason why the age limit was extended, with Cowell’s introduction to the series emphasising why we were really watching – “It’s the usual nonsense. 50,000 apply and probably two are good.”

So, we all knew where we were when the series kicked off with the usual set of no-hopers paraded in front of the camera for our amusement. It seemed it didn’t really matter what the format was or who was involved as long as we got a host of deluded, tuneless wannabes murdering a Mariah Carey song. However, there was a further change as we got through to the studio-based rounds as The X Factor‘s other selling point was revealed – the judges would be putting their reputations on the line. Each was assigned a sector – 16-24 year olds, over 25s and groups – and they would be responsible for mentoring and grooming those they thought were in with a chance. There wouldn’t just be a triumphant contestant at the end of the series, but a winning judge as well.

It was hard to go wrong with a format such as this, as it took aspects from some of the most popular shows of recent years – so much so, during the run, Cowell’s former colleague Simon Fuller began legal proceedings alleging the new show was far too similar to Pop Idol, despite the pair still working together on American Idol. But there was something not quite right with The X Factor. There was a level of contrivance that stopped viewers taking the series to their hearts. Pop Idol had an obvious, easy-to-follow format – simply, “who’s the best singer?”. With The X Factor the different categories made comparisons harder and brought a level of artifice into it, while the voting procedure was changed so the judges had the casting vote on the bottom two in the public phone poll. This heightened the tension, but put the viewers’ votes in second place.

The presentation was less than sure-footed too, with Kate Thornton unable to add much authority or natural wit to proceedings, while her determination to stick to the script and ensure everyone stood in the right place robbed the show of much spontaneity or natural emotion. The sniping between the judges seemed to get in the way as well, coming across as too contrived, and when Sharon Osbourne snapped and told overall winner Steve Brookstein that he was “fake,” the atmosphere was more poisonous than thrilling. There were funny and exciting moments throughout the run, but it wasn’t Pop Idol by any means, and less than a week after Brookstein’s victory, the papers were gleefully reporting that he was booed off during a shambolic appearance on Top of the Pops.

The X Factor spent much of its run opposite the hastily-commissioned second series of Strictly Come Dancing. Brucie was back again for another marathon stint, although it returned to our screens so quickly that Tess Daly was absent on maternity leave for the first half of the run. Instead, first series winner Natasha Kaplinsky was co-host, making for something of a shift from her role on BBC News for the rest of the week. Indeed Kaplinsky’s rise from jobbing newsreader to light entertainment star was another illustration of the power of Strictly Come Dancing, as well as helping the BBC discover more female entertainment presenters, a role they previously had some trouble filling.

This meant the autumn of 2004 saw the closest-fought battle of Saturday night for some years, with both Strictly Come Dancing and The X Factor claiming victory in the ratings. Strictly Come Dancing looked to be the winner in terms of numbers, by a couple of hundred thousand a week, but The X Factor had a larger percentage of that all-important younger audience. It was quite refreshing to have two series on a Saturday night that were capable of pulling in large crowds, and for viewers to actually have a choice of two popular shows. However it was hard not to feel that The X Factor, with its massive budget and heavyweight cast list, not to mention a tried and tested format, would have been disappointed with its performance against such an elderly format and its even more elderly host.

Nevertheless the show was recommissioned for a second series from autumn 2005, and it became ITV’s de facto reality pop format, with Cowell lukewarm about appearing in another series of Pop Idol – despite, for contractual reasons, carrying on with its American counterpart year after year. A planned Popstars 3, meanwhile, which would have seen a search for boy and girl duos, was cancelled in pre-production.

Next Monday: The trip of a lifetime