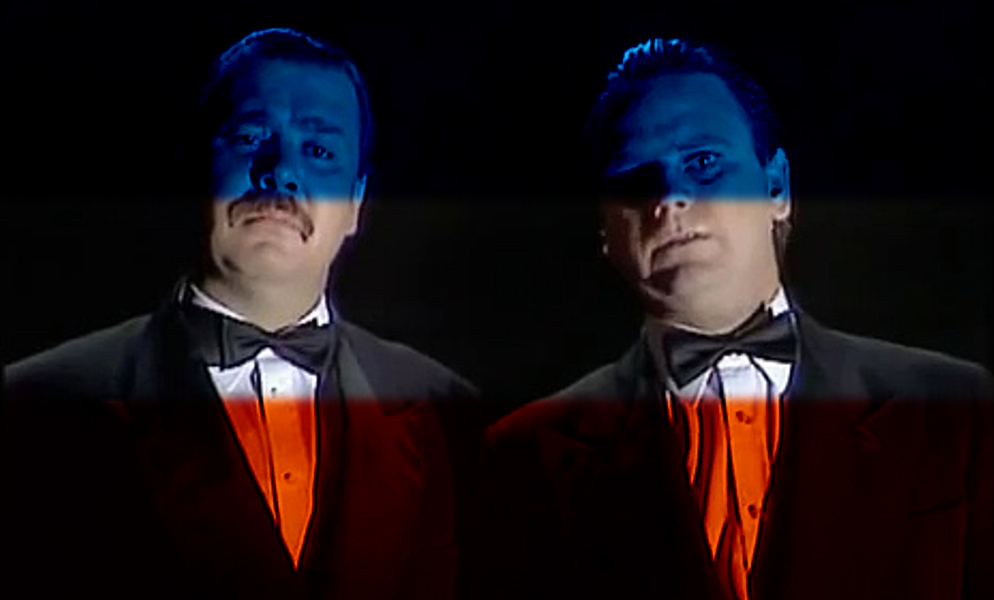 Although a commendably sophisticated and slick production, not everything ran smoothly on Saturday Live. Rik Mayall and Adrian Edmondson’s “The Dangerous Brothers” was an extension of the physical comedy that had marked out the relationship between their two characters – Rik and Vivian – in The Young Ones and their act consisted of little more than the duo inflicting physical pain on each other. However, during one episode, Edmondson ended up seriously burned when a stunt he and Mayall were performing went seriously awry. The sketch had called for Mayall to set Edmondson alight, but the flames – far from simply burning Edmondson’s protective clothing – burned through to the skin.

Unlike most Saturday evening television series Saturday Live was an instant critical hit. Although never attaining audience figures to rival BBC1 or ITV, the show was well-loved by its loyal band of regular viewers. The first series proper (broadcast in 1986) featured an eclectic mix of new and established comedians with Frankie Howerd and Fry and Laurie appearing on the same bill. “Occasionally we booked somebody traditional,” says Geoff Posner, “and it was interesting to see how they related to our audience. For example, we booked Michael Barrymore and he connected with our audience on some levels. But when he started to talk about certain areas that were quite clearly not politically very correct, the audience just sort of started to freeze on him.”

Veteran comedians seldom prospered on Saturday Live (with old Jackson stalwart Jasper Carrott in particular being called outdated by Ben Elton), but Saturday Livewas to be the making of an entire generation of comedians and entertainers. “You’d do a show on a Saturday night and you would be in the pub with Ben [Elton] on a Sunday lunchtime and people would be quoting back at him the act he had just done,” remember Paul Jackson. “Or you would be in rehearsal rooms on the Monday and Tuesday with Fry and Laurie, the Oblivion Brothers, Dawn and Jenny and people would talk about the show. It was a talked about show, which either led you to believe that you were meeting everybody who had seen it, or that slightly more people than were registered on the meters were seeing it – and I suspect the latter. I suspect the rating system that was in place at the time, to a small extent, under measured the younger demographic.”

Ben Elton in particular made a connection with this younger demographic – and beyond. Many of his routines and observations have become engrained in our culture: “Thatch” was for a time a widely recognised term for Margaret Thatcher, and Elton’s routine in which he describes the transformation of the Prime Minister’s hand into a claw, felt like a cultural touchstone. “I remember some of the comics saying to me you know there’s no point in doing Thatcher gags because you only have to say Thatcher and you get a big laugh,” says Jackson. “I remember when she had the operation on her hand, and Ben talked about her hand turning into a claw – that was a decent comment at the time but you were looking to make slightly cleverer, slightly less obvious references. So I think the belief that Saturday Live was driven by a kind of anti-Thatcher agenda is really just not sustainable.”

“(The) sheer success of [Elton’s] anti-Thatcherite rants transformed political stand-up into a ubiquitous cliché,” reflects author William Cook, “and it became increasingly difficult to crack jokes about politics in the clubs without sinking into sub-Eltonesque self-parody”.

Other beneficiaries of Saturday Live were Fry and Laurie and – of course – Harry Enfield (whose Loadsamoney character would attain widespread appeal at the end of the 1980s). However, of most significance for LWT, was the boost given to the career of double-act Hale and Pace. The duo had previously made brief television appearances in The Young Ones and had featured along with Chris Barrie and Carla Mendonça in Paul Jackson’s 1984 late Saturday night Channel 4 sketch show Pushing Up Daisies.Hosting an edition of Saturday Live helped cement their relationship with LWT and consequently the duo found their way onto mainstream ITV in 1986 as part of The Saturday Gang.In 1988 they were awarded their own primetime LWT series Hale and Pace (which would run successfully for nine years) and in 1989 the duo won the Golden Rose of Montreaux. Michael Barrymore (who hosted an episode of Saturday Live) would also later come good for LWT, however to claim that Saturday Live played any meaningful part in his ascension would be – at best – tenuous.

As for Saturday Live, it ran very successfully for two series, surviving the departure of Paul Jackson who handed over the directing chores for the second year to Ian Hamilton and the producing responsibilities to Geoffrey Perkins and Geoff Posner. The second series ran at the later time of 10pm and in 1988, a third run was commissioned for Friday nights (the programme’s title was changed to Friday Night Live). This final series, while introducing the world to the popular Enfield character Loadsamoney, showed the first signs of an aging format. Fry and Laurie departed to pursue their own television show with the BBC, and replacements Jack Docherty and Moray Hunter seemed content to plough a similar furrow, but to less effect.

Perhaps the increasing success of the programme’s staple of comedians dulled the sense of innovation that had accompanied the earlier years. Whatever the reason, Friday Night Live was not as essential viewing as its Saturday night predecessor. “The likes of Enfield could have succeeded at any time – all his tenuous association with alternative comedy did was to blind some to the nature of his material, to cloak the fact that he was, as he put it, merely Dick Emery with A-levels,” reflected writer Andy Medhurst in November 2000. “Yet before Saturday Live, and before Channel 4, it’s unimaginable that comics as uncompromising and uncompromised as Julian Clary or Jo Brand could have flourished on national television. Their incisive and scathing comedy of sexual politics showed that one of the most important legacies of alternative comedy is its expansion of what the term political comedy could encompass. It needn’t be confined to topical swipes at particular governments, but could incorporate broader, deeper critiques of social assumptions … Saturday Live might have been flawed and fractured, but its influence was profound. A tape of it viewed today looks as hideously dated as its participants’ haircuts and sounds hoarsely punchdrunk with its own arrogance, but it genuinely changed the cultural agenda. It freed a generation from Tom O’Connor and Duty Free. It cleared a space for comedy to be young and sexy”.

It was the production team that eventually called time on the show. “When we got half way through series three, Channel 4 asked if we would do another series,” says Posner. “We all sat down around the table and realised that the surprise and speed at which all this had happened was part of it. We had unlocked a box and lots of performers came out of it to appear on television, but we obviously couldn’t keep doing that. Ben [Elton] wanted to go off and write something. Harry [Enfield] wanted to go off and write something. People realised that if they tried to hang onto the show, they might become the dinosaur that they were so much against.”

“The importance of it was the team,” says Russ Abbot, a dinosaur in the eyes of the cast of Saturday Live. “That was a good change. And it was worthwhile because it opened other doors for entertainment and comedy and allowed other people in – and it was their way of doing it.”  Bobby Davro believes, “people like myself and Russ Abbott couldn’t compete. It made us look watery. It made us look weak. I think that’s why you saw the demise of Saturday night broken sketch comedy shows … I used to get frustrated a little bit and think how can they get away with those jokes? There’s French and Saunders you know doing all these outrageous things, and Hale and Pace were on Sunday nights doing these outrageous sketches. And they were getting awards for them … I think it had to go that way because it was getting slightly stale. You know I think that we’d exhausted every sort of avenue of material that we could at that time.”

Several post-Saturday Live entertainment series sprang up. The most significant of these were Saturday Zoo (which ran on Channel 4 in 1993) and the BBC’s 1990-1 stand-up show Paramount City. Neither was able to capture the excitement, or the following, of Saturday Live. In 1996 LWT actually attempted a revival of the series (this time for ITV), featuring comedian Lee Hurst in the compere role. Without a wealth of new, exciting comic talent to energise it, the series was less vital, less relevant and far less funny than its illustrious forerunner and suffered a critical mauling as well as public indifference.