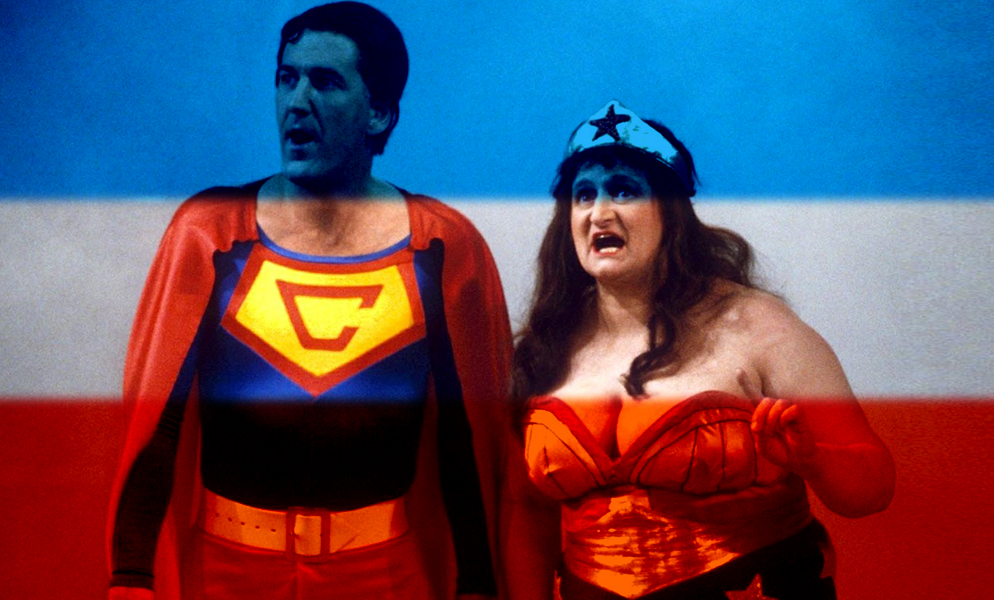 Aside from streamlining the rank and file of LWT, Greg Dyke was also intent on maximising the company’s advertising revenues. To do this, meant delivering to advertisers not just big audiences, but the right kind of big audiences and this in turn meant producing programmes that appealed primarily to the young and affluent. Yet, LWT’s roster of stars time didn’t appeal to that market. Working with his head of light entertainment, Marcus Plantin, Dyke set about putting that right. Predictably, the first act to come under the spotlight was Cannon and Ball. Plantin had in fact produced the duo prior to his promotion, and had overseen both a change in format (which saw Cannon and Ball drop their usual sketches and stand up for a sitcom in which they played themselves staying in a luxury London apartment while making a TV series) and a drop in the ratings (from 13 million in 1984 to just 11.4 million). The duo were undeniably still popular, but appealed to entirely the wrong demographic and so would have to go.

Aware of the growing popularity of Hale and Pace, as well their lingering credibility thanks to their appearances on programmes such as Saturday Live and The Young Ones, Dyke saw them as the perfect replacement for Cannon and Ball. Consequently as Tommy and Bobby’s contract drew close to expiration in 1988, Dyke and Plantin made it clear that they would not be renewing. “We were one of the first to go,” remembers Bobby, “along with Jimmy Tarbuck.” Clearly the winds of change were blowing through LWT. Although, their recent series had suggested a dearth of new ideas, Cannon and Ball were still perceived by many as having a future on television. Consequently, both the BBC and Yorkshire Television (which always seemed content to target a more mature audience then its brash London counterpart) made overtures to the duo.

While it was clear that the BBC offered much in the way of support for their artistes, the money they were willing to commit to a contract didn’t match the over made by Yorkshire Television. “As usual the manager started talking in our ear and persuaded us to take YTV’s offer,” remembers Ball. “It was the worst mistake we made.” Their association with Yorkshire Television was to prove both brief and fruitless for all parties.

The decline in fortunes for Cannon and Ball was merely symptomatic of greater changes happening in light entertainment, and in particular mainstream comedy. Little and Large’s position at the BBC was also under threat. Again, although still able to command a decent sized audience (often in excess of 12 million) the BBC’s view on what constituted acceptable comedy seemed to be changing. Blackadder Goes Forth would appear the following year and its co-writer – Ben Elton – would also complete a stint as guest presenter of Wogan before signing up for his own series in 1990. In the meantime he would announce that he was happy to pay the BBC Licence Fee, just so long as none of it found its way into the hands of Syd and Eddie.

Both Little and Large and Cannon and Ball seemed particularly vulnerable to the cultural change taking place in television. “They came along and just picked up the leftovers from Morecambe and Wise, without having to try very hard,” explains Media Studies lecturer Andy Medhurst. “Movements in popular music are the same: the people who come along at the end are copies of what went before.” Still for the time being, both comedy acts would cling on (although a poorly received appearance on Comic Relief in 1988 by Syd and Eddie didn’t help their cause), it would take another couple of years yet for television to rid themselves of these signifiers of an earlier age.

As for another dinosaur – Jimmy Tarbuck – 1988 found him at the helm of the last primetime LWT Saturday night series of his contract.After Ten With Tarbuck was described as “something new in light entertainment” however in reality it was a pretty straight forward variety show with Tarbuck interviewing a major sporting personality, interspersed with performances by popular singers and stand up from American comedians and young rising stars who Tarbuck “tipped for the top”. However some of the Scouse comedian’s opinions on new comedy failed to chime with the prevailing mindset. “Tarbuck is of course reputed to find ‘new wave’ or ‘alternative’ comedians about as funny as AIDS,” reported TV Times’ Anthony Davis in 1988. “’That’s not true,’ he says. ‘That’s the press making statements and altering statements that I’ve made. I think Rik Mayall is a very talented person and very funny, but I think some of the charge-and-shout brigade aren’t, and I don’t want to hear rude words 10 times in a night and see them pick their noses. If I want to see an outrageous performer, I’ll go and watch Billy Connelly, who’ll have me in hysterics.” Whether, Tarbuck’s views were shaped purely by his own personal tastes, or by the increasingly negative effects that such comics were having on his own career is impossible to tell.

Increasingly a schism seemed to be appearing in popular comedy, with both sides over-reacting to the other. Key to the argument was the differing sensibilities of the mainstream and alternative comedians. Consequently, in 1988, it seemed that everyone was causing offence, (as was only too evident in the letters page of Radio Times). “I am writing to you after watching Carrott Confidential”, began one viewer. “I am a mother of one of Jasper Carrott’s ‘nutters’ and do not find these people the source of as much mirth as the studio audience did … It’s so easy to make fun of people who can’t answer back. Please, Jasper Carrott, do not on the one hand jibe at the sickly standards of the most widely read tabloid, while telling jokes on the other that would earn you a place on its editorial board.”

Two other comedians who could eventually come a cropper of sweeping changes were Russ Abbot and Les Dennis, yet for the time being both seemed reasonably secure in their position. “When I go home I switch off,” commented Abbot in 1988. “I never take work home with me. I learn my words on the way to work and on the way back, then leave the book in the car until the next day. Because if you take it home, you start pacing the living room then, don’t you? You’ve got to switch off; otherwise your time never becomes your own. You’d be paranoid about it, then you’d be getting into the Method and trying to analyse it and break it all down … If you get something which is funny on paper, my attitude it to go out and do it.”

Similarly Les Dennis felt in relaxed mood, even though he’d had to re-establish himself as a solo performer after the death of partner Dustin Gee. “I’ve always had a belief,” he mused in 1988. “Straight away I felt confident. I knew what I was about and what I could do. But my confidence was a little bit knocked when suddenly people started saying: ‘D’you think you’d better get another partner?’ A bit patronising. ‘Have you found your partner yet?’ Like I’d lost my keys or something.” Apparently appearing in Russ Abbot’s show in 1987 had boosted Dennis’ confidence, and also inspired him to introduce more original characters into his 1988 series of The Les Dennis Laughter Show. Consequently we were served up a “right little weirdo” called “Mr Perkins” and a spoof of The 39 Steps featuring “Richard Pranny”. “It meant that every morning, instead of getting up and dressed as somebody famous and then forgetting that and finding somebody else, for three weeks I had to play this one character, this spoof of Richard Hannay,” explained Dennis. “And I enjoyed the experience so much more than quickies and just doing impressions. I’d like to broaden out in that direction a lot more.”

However Dennis was not entirely impervious to criticism; particularly from the new wave of comedians. Indeed a chance meeting with Alexei Sayle in a Liverpool Chinese restaurant initially filled Dennis with dread. “I was a bit frightened of him because he’s so … radical. But he came over and sat down and we chatted for about an hour. And he was really dead nice and complimentary about what I did. I thought: he’s actually watched some of the stuff I’ve done.” So, while not the most ground-breaking television series ever, both The Les Dennis Laughter Show and The Russ Abbot Show were establishing themselves as Saturday night bankers for the BBC. Whereas before, Dennis and Abbot had been perceived as part of some new wave of mainstream comedians, they were transitioning into of the old guard.

Next Monday: I sat for a moment in silence, then turned in my chair and left the stage