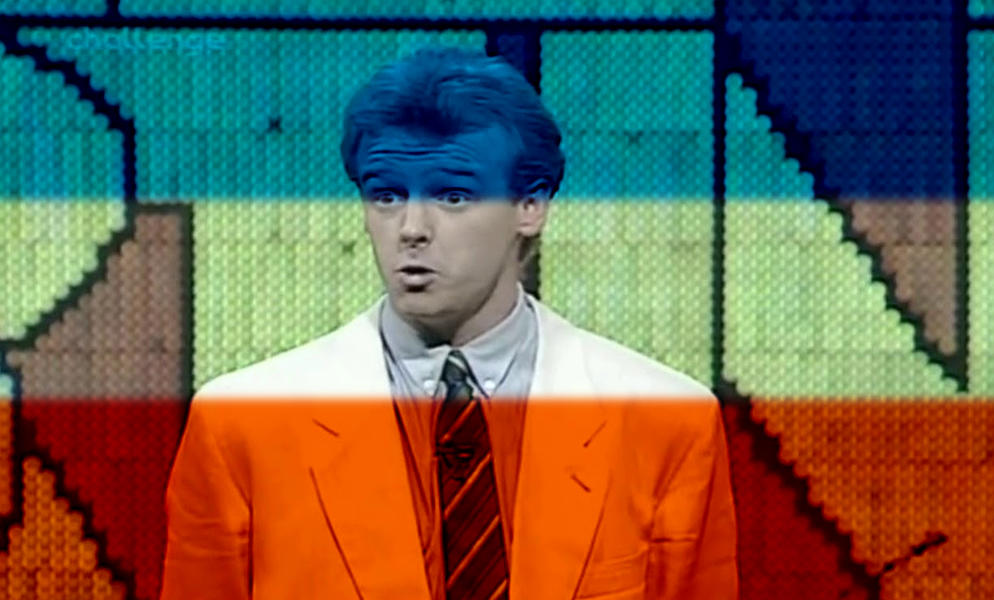 Programmes come and programmes go, but in 1987, mainstream comedy continued to rule Saturday night television. In fact, on one fateful Saturday in early July, ITV viewers were able to subject themselves to an entire evening of inoffensive humour. Starting at six o’clock with Central Television’s Cue Gary (featuring Gary Wilmot who, having appeared in both Copy Cats and Saturday Gang, had at last been able to secure himself a solo series), this was followed at 6.45pm by Kate and Ted’s Show (produced by Granada and featuring another ex-Saturday Gang member) and then at 7.15pm by the return of TVS’ own comedy ensemble 5 Alive(now featuring Brian Conley, Peter Piper, Doon Mackichan, Joanne Brookes and Andrew Secombe). The evening was rounded off at 7.45pm with an edition of the game show Family Fortunes, which had recently dispensed with host Max Bygraves in favour of Les Dennis. Of these shows, Cue Gary peaked at 10.2 million viewers, while Family Fortunes found itself in some trouble having dropped from 16.1 million viewers just two years ago to 10.7 million.

“People ask me if I’m worried about being overexposed on TV at the moment,” commented new boy Les. “But I have to re-educate everyone into thinking of me as a solo artist, so I don’t mind.” Of the decision to host Family Fortunes, Dennis merely suggested that “it’s a new challenge, something I should have a go at. It’s such a great game.”

Some years later though, Les revealed that he had initially been resistant to the thought of taking on a game show. “I thought: ‘I don’t want to do a game show it’s not what I see myself doing – standing there in a suit and being cheesy.’ I saw myself as moving into TV drama.” However, encouraged by his agent, he took the job.

“I made what it is with hindsight a mistake of watching back Bob and Max and thinking, ‘that’s how you do it’ and it was only after a couple of series that I started to find my way. I went into it thinking I have got to do jokes that every member of the family can get. I didn’t have a road map for the show, you know, I was following somebody else’s route. I think one of the reviews said when I first did it I hosted Family Fortunes like an ineffectual probation officer.  I did 26 shows in three weeks, and you don’t see them back, so you don’t have a chance to look at it and go that’s wrong I’ll improve on that the next week.”

Nonetheless, for those who wished a double dose of Les on Saturday evenings it was possible to turn over to his BBC1 series Les Dennis’ Laughter Show at 7.25pm and catch the entertainer impersonating (amongst others) Phillip Schofield, Paul Hogan, Esther Rantzen, Dirty Den and Bruce Willis before switching back to catch the second half of Family Fortunes.

Bobby Davro, too, had cause for concern regarding over exposure. “It could almost be called the Bobby Davro season on ITV,” proclaimed the TV Times in June 1987. “Last week it was The Best of Bobby Davro On The Box and this Saturday there’s a repeat of his Christmas show, Bobby Davro’s TV Annual. He completes the hat-trick by topping the bill in Summertime Special next Saturday.” Apparently, while most of Davro’s impressions (for this – like Dennis – was Davro’s stock-in-trade) had gone down rather well with their real-life subjects, Alex Higgins claimed that the comic’s take on him was very upsetting. “He thinks I’m taking the mickey out of him,” rebuffed Davro. “Well I am, but that’s my job and I don’t care if he doesn’t like me.”

1987 also found Kate Robbins on an upward trajectory. Not content with her role in Saturday Gang,in 1986 Kate had enlisted her three sisters (Jane, Emma and Amy) and brother Ted and had landed herself a mid-week one-off TV comedy special entitled Robbins. This led directly to a six-week series and one-off Christmas special for Kate and Ted. Of the two, Kate made the most impact (perhaps due also to her association with Spitting Image) and it was no surprise when the following year Kate and Ted’s Show returned in a format almost identical to the first series, save for the title which relegated Ted to a non-starring role, by assuming the moniker The Kate Robbins Show.

But what of those left behind, bringing laughter to our screens as part of a collective and not as an individual in their own right? The 1987 crop of Copy Cats featured some new faces, but also some old familiar ones too. Of the new crop, one of them could be quite literally described as a “New Face”. Impressionist Pauline Hannah entered the television talent competition of that name and won her heat comfortably even though one of her judges was lampooned in her act. “I wanted to drop [the impression] … but everyone told me to leave it in,” Hannah remembers. “I missed it out for the rehearsal but put it back in for the actual show – and [the judge in question] Samantha [Fox] was great about it.” In the event Hannah was to lose out in the Grand final to comedian Duggie Small (who in January 1987 appeared on Wogan and was so spectacularly unfunny that he managed to all but kill his career stone dead), but she had achieved enough to get her noticed by the Copy Cats production team.

Unlike Davro, Hannah was at pains to point out that she did not seek to take the “mickey” out of the people she impersonated. “I would not want to be cruel,” she remarked. “I don’t see the point in that.” Lining up alongside her on the high stools was – amongst others – Copy Cats stalwart Allan Stewart. Sadly, mainstream fame still seemed to allude him. As in 1985, Stewart claimed, “it doesn’t bother me much. You don’t realise how many TV shows you’ve got to do to get known out of Scotland. I’ve done every series of Copy Cats, every guest spot there is, and I’m only just starting to get through.”

While Stewart’s words seemed to echo precisely what he had said two years previously (he was even to repeat the “more pilots than British Airways” gag), there did seem something different about him. Not only was he at last moving south, but he now acknowledged that “there were three or four years when I went right off, but in the last two years it has all come back together. I got so complacent. I had the big house, a new Mercedes every year, I was living the life of Riley and just doing the gigs I’d always been doing. Then I met a guy called Taylor Ferguson … He started on me – ‘Your hairstyle hasn’t changed in years, that dinner suit is out of fashion, you need a bigger house.’ He totally changed me.”

1987 would see Stewart and the rest of the Copy Cats take the act out on tour. “Aiden J Harvey and I doubled up and we really got a buzz off each other” recalled Stewart. “In the new series we’re doing Hinge and Bracket and the Two Ronnies together … Aiden has realised how easy it is to get a laugh dressing up as a woman – so in the new series we’re both wearing frocks!”

Next Monday: There’s such a passion for nostalgia right now