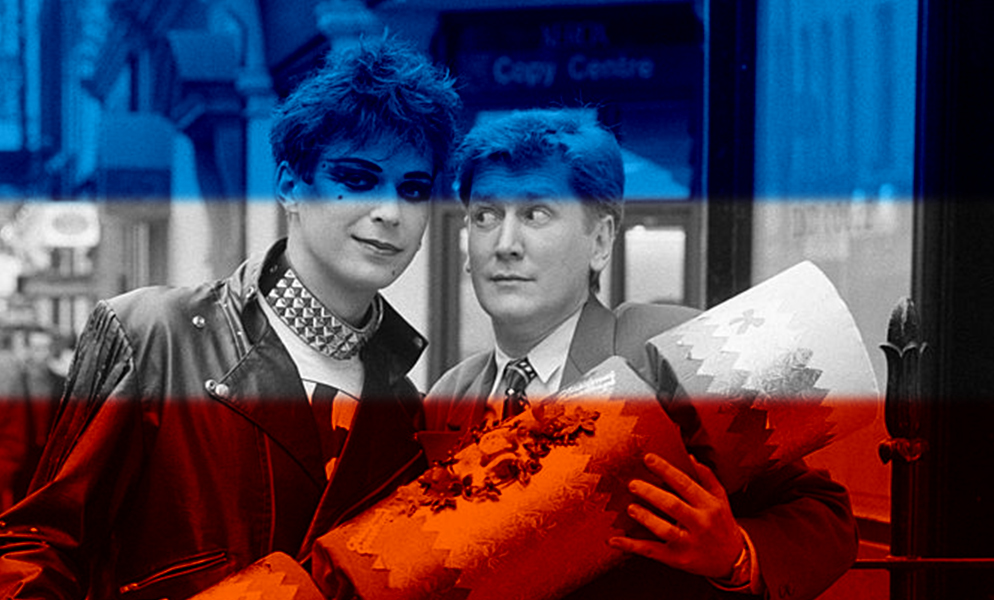 One of the significant barriers LWT had to overcome in attracting the ABC1 audience that it so craved was the belief commonly held by that section of the audience that Saturday night television in general, and LWT in particular was “naff”. Such a perception was reinforced by series such as Filthy, Rich And Catflap (BBC2 1987) that mercilessly ridiculed “old school” entertainment figures (such as Jimmy “Tarby” Tarbuck) and Channel 4’s bold attempts at alternative weekend entertainment, includingFriday Night Live, Clive Anderson Talks Back, Wired and Club X. Collectively, these programmes seemed to deconstruct the traditional notion of television entertainment, be it through parody or a desire to present something different from the accepted notion of entertainment. It was no surprise that this attitude (increasingly prevalent as the decade wore on) should eventually infiltrate the heartlands of traditional television light entertainment; namely peak-time Saturday nights on ITV.

“We asked ourselves what we disliked about game shows,” explains Mike Smith in an uncharacteristically deconstructive mood, “the sexism, the dolly birds, the catchphrases”. Great things were expected from LWT’s Trick Or Treat. Based on an Australian format, it was described in the advance publicity as “hardly mainstream,” and seemed an attempt to marry both traditional and alternative elements. The show consisted of presenters Mike Smith and Julian Clary inviting members of the studio audience to participate in a range of silly games to win a place in the grand final at the end of the programme. Thus far Trick Or Treat sounds like countless other game shows, yet in its execution it was markedly different. For example, prizes ranged from the genuinely good (a brand new car or a caravan) to the amusingly awful, such as a broken down Mini or 24 carrots. The so-called “dolly birds” weren’t quite what they seemed either and would regularly “accidentally” knock a prize off a trolley, or look sullen and miserable. All in all, here was an attempt to subvert and poke a fun at the game show format. Bizarre as all this seemed the presenting combination of Mike Smith and Julian Clary (then billed as “The Joan Collins Fan Club”) was in many ways the programme’s strangest element.

For Clary, Trick Or Treat was to be his big break. Having previously appeared on Friday Night Live and Cabaret at the Jongleurs, the ITV series brought his act to a whole new audience, and in the event caused something of a stir. Clary’s liking for double entendresand predilection for referring to contestants as “punters” were both designed to bring an edge to Trick Or Treat and establish the series’ modern, “with it” credentials. Conversely, Mike Smith was from the old school of TV. Yet Trick Or Treat represented something of a milestone for him too – it was to be his first television series after suffering major injuries as the result of a helicopter crash the previous September. “Every limb of my body had a cut on it,” remembers Smith. “It was an accident which took six seconds, yet will probably take six months to repair. But the most important thing is that we woke up alive … I was close to being paralysed. But apparently I have a large spinal canal which saved me.” Smith and his then girlfriend (and soon-to-be-wife) Sarah Greene had been visiting friends in their helicopter. Smith had acquired his flying license earlier in the year and was deemed an excellent pilot. However, in embarking upon the journey homeward the helicopter suddenly plunged 150 feet crashing into woodland. “I took the decision we were going to crash and flew it as far as I could,” he explains. “We went into the trees which knocked me out, and then we were out of control.”

The injured Smith and Greene made front-page news on the following day’s papers with horrific photographs of their wrecked helicopter. “I’m loath to criticise them because I know we delivered a perfect tabloid story,” Smith reflects, “but I did find it deeply intrusive that one paper could take stills from a fire brigade video of the crash and put them on the front page. Someone brought me the papers in hospital the next day and I thought I’d died – there was my whole career laid out in front of me.” As unwelcome as the publicity might have been, it did at least prompt Smith’s old on-screen partner Noel Edmonds to make a visit to his bedside – it was the first time the duo had met since Edmonds had casually dropped him from his Christmas specials.

Since that time Smith had attempted to re-shape his career. “A constant dilemma in my life has always been that I want to marry current affairs and light-entertainment together,” he explains. “One of my greatest disappointments was that I never got to present Tomorrow’s World. I auditioned and was asked if I would stop doing light entertainment. I said no and didn’t get the job.” Yet in early 1989, he seemed happy enough to be working with Clary (whom he described as a “charming character”) on what he obviously thought was an innovative and exciting new programme.

Yet the viewers and the critics did not match this enthusiasm. Even thoughTrick Or Treat had been directed and produced by the hugely experienced Michael Hurll, it was a flop, attracting negative publicity for LWT when it was revealed that most of the show’s hostesses had previously appeared in soft-core pornography such as Electric Blue videotapes. In retrospect, the series’ attempt at bringing an alternative comedy “edge” to a mainstream game show misfired because the programme’s central “joke” was stripped of any sophistication, leaving Clary with very little to work with save the most inane of innuendos. As such Trick Or Treat was little more than a conventional game show with arbitrary gags and supposedly amusing prizes thrown into the mix.

For LWT, it represented a rare misjudgement, and today still looks like one of the strangest programmes they have ever shown on primetime ITV (in fact, Trick Or Treat was originally scheduled for 7pm Friday nights but was moved to Saturdays at the last minute). However, Smith and Hurll – at least – still look back at the series with some fondness, with Hurll citing it as the future of game shows and the precursor to series such as Vic Reeves and Bob Mortimer’s Shooting Stars. Whether the comic duo would concede Trick Or Treat’sinfluence on their own series is another matter entirely.

Next Monday: The feel of Saturday night