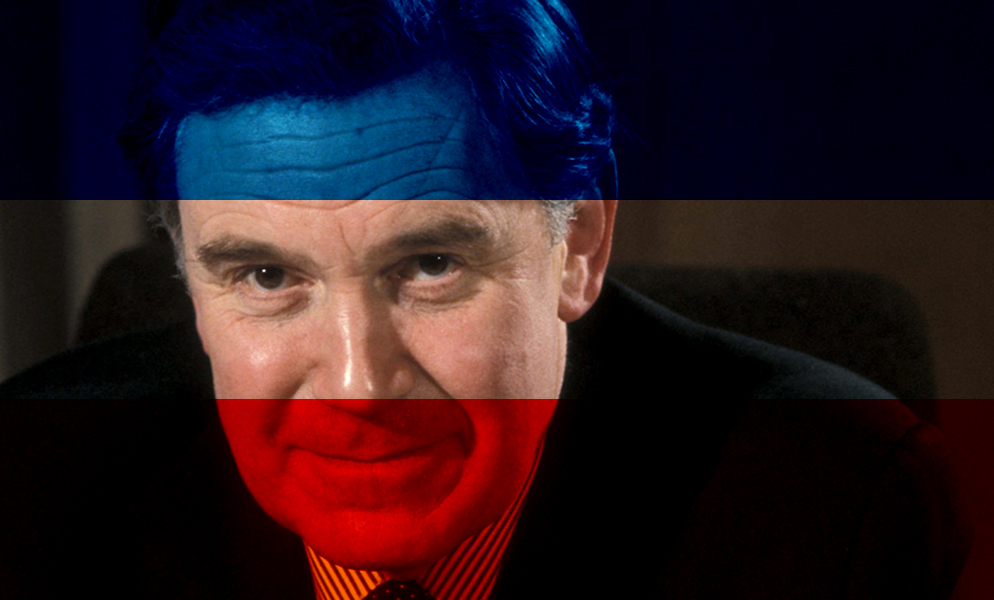 Hughie Green is a troubling figure in British television history. Born on 2 February, 1920 in London, but raised in Canada, Green became a popular presenter on ITV in the 1950s and, in the process, revolutionised British light entertainment. By 1978, his slick presentation style (modelled on American television), avuncular but dominating personality and stewardship of some of the longest-running and popular television programmes in British history (Opportunity Knocks and Double Your Money) ensured he had become a figure much mimicked by popular comedians of the 1970s (such as The Goodies and Mike Yarwood), rebelled against by entertainers of the following generation, but – above all – an ever present in the firmament of British light entertainment.

1978 was to prove a difficult year for Green, with his most significant vehicle, Opportunity Knocks, cancelled by Thames Television after a run of 22 years on the insistence of the IBA, who felt that ITV should look to develop new shows. Green had developed a reputation within the industry for being incredibly difficult to work with. His obsessive desire to control every aspect irked his bosses, and his developing fixation with establishing a political bond between himself and his audience left him marginalised and brought him ever more frequently into conflict with those around him. As we weave our way through the story of Saturday night television we will come across a number of influential and controlling television presenters who eventually find themselves deposed by disgruntled colleagues and managers: Green is perhaps one of the first modern examples.

A number of courtroom disputes and a bitter appearance on Wogan were as much exposure as he would receive over the next 20 years before his death in May 1997 (although posthumously he did find himself once again the subject of national debate when controversial revelations were made at his funeral). Yet had a spirited attempt in 1980 to depose LWT of its London television franchise been successful, then Green would have retained much, if not all, of his profile – at least throughout the following decade.

The latest round of renewals brought up again a number of fundamental questions regarding the direction of the ITV network. As they had in 1968, the IBA gave particular consideration to the London franchises. This time a geographical split of the region was considered, giving the two successful bidders a seven-day remit instead of the current five-day and weekend split. In addition, particular consideration was given to the BBC’s continual dominance on Saturday nights. The omens must have looked worrying for LWT, particularly as London was the only region in which viewers claimed they would choose BBC1 over ITV in a straight popularity contest. In reflecting upon the current situation, the IBA reported, “during the week four major companies, each with a different expertise, contribute to the programme mix. At the weekend the provision of programmes is in practice in the hands of one company, with considerable contributions from ATV and occasional help from Yorkshire and Granada”. LWT, perhaps conscious of the ongoing rumblings coming from the IBA (which was also emitting strong signals to suggest that at least one current franchise holder was to be sacrificed in order to encourage new bids), prepared meticulously for the defence of their franchise. Although they had until May 1980 to complete their application, in 1979 LWT recruited the managing director of Independent Television Publications (publishers of TV Times), Jeremy Potter, to co-ordinate the application.

ITV was not alone in finding itself in a state of flux in 1980. The BBC’s worries resulted from harsh external forces beyond the realm of broadcasting. Director general, Ian Trethowan commented at the time, “the root of our problem is simply this: that this country has the highest rate of inflation in Europe and the lowest licence fee”. The requirement for the corporation to find £130 million over two years was necessitating some difficult decisions. Most controversially the BBC announced plans to cut five of its orchestras (including the Scottish Symphony and the Northern Ireland orchestras). The abolition of a separate radio license and the increase of the television license to £12 for black and white sets and £34 for colour had provided the corporation with additional funds, however these were being directed towards reducing the BBC’s financial deficit (which at the time amounted to £600,000 a month in interest alone) and not to programming.

The resulting furore had the public up in arms and the Musicians’ Union briefly out on strike. An under pressure Trethowan attempted to formulate a reasonable argument: “nearly everyone who has written to me has in effect said ‘I don’t care what you cut so long as it doesn’t affect me’. Some others have urged us to drop individual performers or programmes they dislike, not recognising that the replacements might well cost more … The decision to disband several of our orchestras was not taken lightly, but they were formed at a time when the BBC’s output was very different from today. Radio was then the dominant medium, not television, which makes very little use of the orchestras”. Not all could see the cold, but undeniable logic at the heart of the BBC’s decision. Composer Robert Simpson resigned from the BBC during the strike citing a “degeneration of traditional BBC values in the scramble for ratings”. He would later refer to the corporation as “a very Kremlinesque organisation”. The situation was eventually resolved to the mutual satisfaction of the union and the BBC. Not before the loss of that year’s Proms though.

1980 was a good year for comedians. The ill-fated Bruce Forsyth’s Big Night had done much to bring to mainstream attention those types of entertainers that had previously only been able to gain exposure via Opportunity Knocks, or The Wheeltappers and Shunters Social Club. LWT’s Search For A Star was proving to be another outlet for working-class entertainers. Broadcast on, or around, 8pm on Saturday evenings in late 1979 and early 1980, this was typical Saturday night television: a simple premise spun out via an overly complicated collection of regional voting panels designed to bring to the programme a scale that belied the fact it was, in essence, just another talent show. Largely forgotten now, Search For A Star never once registered within the Top 20 most watched programmes of the month in 1980 however it is of importance, if only as an archetypal example of its genre. Hosted by Steve Jones, Search For A Star brought together a collection of faces more famous now for other things, but at the time representative of the ITV family of 1980. Richard Whiteley appeared regularly as the host of the Leeds public voting panel, while Nick Owen would pop up now and then to represent Birmingham.

Speaking in 1980, series producer John Kaye Cooper stated that Search For A Star is “not a talent show. All our contestants are working professionals who need a break on television.” Rehearsals for the series would take place in a dingy old cinema hall in Waterloo. However, while there was little glamour associated in running through an act in such surroundings, Kaye Cooper’s traditional rallying cry to the contestants was inspirational. “Tomorrow,” he would tell them “we go into the studio. Now just enjoy yourself. Winning isn’t that important. It would be nice, but it doesn’t matter. You are going to be seen by millions of people and hundreds of agents. As a result your fees will double. You will get more bookings and better bookings.” Series talent scout Bill Hetterley focussed on bringing singers and comedians to the show, wisely determining that these were the kind of acts best suited to a Saturday night audience. However, this approach had pitfalls. “So many comics rely on smut for their laughs that they have lost any confidence in putting across clean material which will pass muster on family TV,” he remarked at the time. “And too many singers, used to drunken indifference wherever they perform, go through the motions and are incapable of really communicating with the audience”.

The 1979-80 series culminated in a grand final on 19 January 1980. “It’s D-for-decision day as the winning acts from the six Search For A Star heats meet for the final,” proclaimed that week’s TV Times. “The prize is a television show of their own”. In keeping with the general rise in popularity of stand up, comedians swept the board. The series winner – Dave Wolfe – stood out from the rest, not because his material was necessarily the best, but because the young comic had focussed carefully upon translating his act to television. “Frankly I didn’t expect to win,” recalls Wolfe. “If I’d been marked on the run-through show the night before I’d have been last. As the final act on the show, I’d watched the others, saw how good they were, and my confidence drained. On the night of the TV show I stayed in my dressing room until it was my turn. I knew that by watching the other acts who all had comedy touches, it would put me off”. The immediate aftermath proved positive for Wolfe. His workload on the Northern club scene increased dramatically and just weeks after winning the final, he was finding cause for reflection on how his life had changed: “Only five years ago I was a bar manager in a restaurant on £50 a week. I gave it up to be a comic. It’s what I wanted to do. I was getting £12 for two shows a night. I never really saw myself as very talented – more adaptable. I was terrible when I started. I’m still not too sure of myself. But I like hard work”.

Mindful of how his life had changed, Wolfe was not blind to the true benefit that television exposure brought him. For example, most of those who later came to see him perform at Nottingham’s The Big Heart club were more interested in the headlining act The Dooleys. “Hands up those who saw me on the show?” he asked. “Hands up those who didn’t. Hands up those who couldn’t care less”. Wolfe’s next major television exposure occurred on 5 April when LWT honoured their promise and provided him with a one-hour network special. Accompanied by the then ubiquitous Faith Brown and the equally ever-present The Third Kind, it was enough of a foot in the door to ensure that Wolfe would be able to sustain a career in show business from then on. Although he has appeared on television numerous times since (perhaps most memorably in 1984’s The Main Attraction and then as a resident panellist on Bradley Walsh’s 1992 comedy game show Only Joking), today Wolfe plies his trade primarily in the after-dinner speech market. His rate puts him on a par with Gyles Brandreth. The unofficial “king of corporate comedy”’s promotional material still makes much of that victory back in 1980.

Next: “Together we’ll be ok”