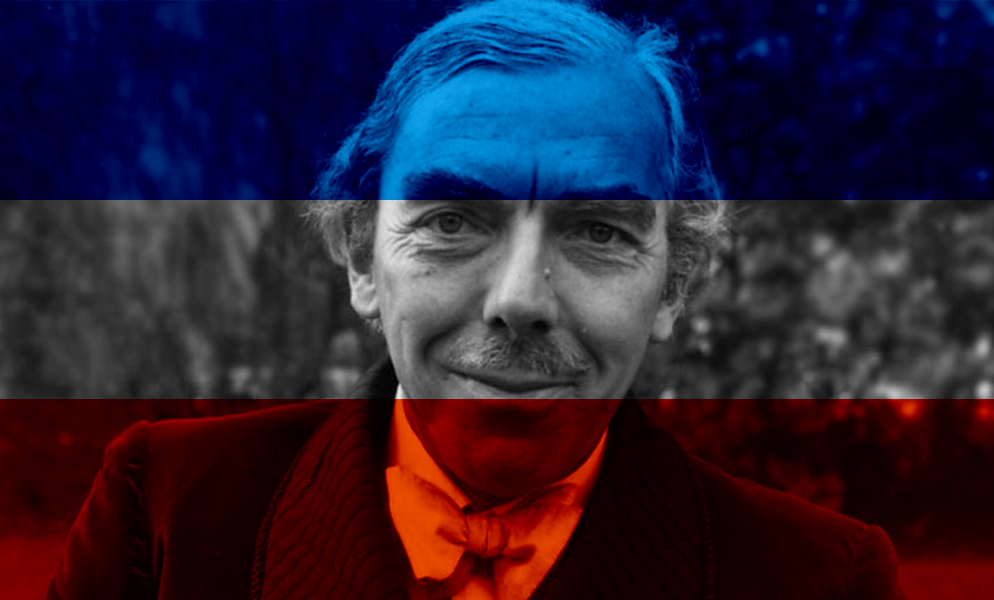 In 1968, Frank Muir sat down at his desk to write a letter. Concentrating on work was not always easy in this office. Open plan, bustling and markedly different from the one he had grown accustomed to at the BBC; London Weekend Television’s high-rise home just off the North Circular Road was pretty much a door-less environment. This made ticking off staff, or taking a quick swig of something alcoholic, very difficult. Nevertheless, Muir was able – with some effort – to focus his attention on the matter at hand. Addressed to the premises manager, he wrote: “I am grateful to you for reminding me of the legal position of (my secretary) Miss Bruce-Lockhart’s popular pet (Ricky) which spends its day snoozing under her desk in my department. Happily, I am able to assure you that the animal is not affected by your wise house rules of no dogs in the offices because Ricky is not a dog. Miss Bruce-Lockhart rescued him from a Spanish beach under the impression that he was a dog, but an inspection by a zoologist (the famous one on television) has revealed that he is an Andalusian, hornless, short-haired mountain goat, an uncommon breed which is perfectly harmless to humans and carpets.”

Those who remember the earliest days of LWT recall a chaotic, but creative environment in which the occasional eccentric was considered an indication of the company’s commitment to creative television. True to form though, some of those eccentrics came up with ideas that in hindsight were just too artistically focussed. Did anyone really think that Frank Muir’s idea for an “Anglo-Russian exchange of comedy plays” would result in something that would attract a large weekend audience on ITV? Muir obviously did and recalls the outline prepared by Russian screenwriter Alexei Kapler with great fondness.

“The action was set in one of those tiny ancient wooden houses which still crouch, gently falling apart, at the foot of Moscow’s concrete high-rise offices and vast ministerial blocks. It was a semi-detached bungalow, one half occupied by a failed priest … and the other half housing a failed science master … The priest fakes icons to earn an extra rouble. He also brews kvas, a highly popular Russian drink. The priest mixes up his icon-faking chemicals and accidentally spills some into his friend’s kvas before leaving the beaker out for him on the balcony to enjoy his usual end-of-day swig. When darkness falls, the science master finds he has developed a bright shining halo.” The resultant plot was intended to follow the ways in which the priest and the science master set about exploiting the halo. This was hardly Steptoe and Son, but the fact LWT was prepared to let Muir fly off to Russia for a week to pursue the idea demonstrated the station was either genuinely committed in taking ITV in strange new directions, or had no idea where it was going and so was willing to let its team members carve out idiosyncratic pathways for themselves. In the event (due to Russian, not TV, politics) Kapler’s idea never came to fruition.

Frost described those early days as “the lull before the storm”. The new station had begun from a position of keen optimism. Strong support from the Independent Television Association, and a collection of some of the finest talent in television augured well and good humour marked out LWT as a different place from other television companies. Passing comment on the cramped conditions that he had originally found himself working in, Muir famously remarked to Humphrey Burton (who he had to work side-by-side with) “Would the drama department mind getting its elbow out of the light entertainment department?”

But there were many factors that Muir and company failed to take into account as they embarked upon their new lives at LWT. For one thing, the fickleness of viewers; the initial reception to the “new” ITV network was poor with the channel’s share of the weekend audience dropping by 12{30e2395aaf6397fd02d2c79d91a1fe7cbb73158454674890018aee9c53a0cb96}. Bad ratings predictably resulted in a massive decrease in revenue growth, but it wasn’t just the share of the audience that ITV was losing out on. By the end of the 1960s, the sale of television sets had reached saturation point. The total potential television audience was no longer increasing. Other factors were conspiring too; the country was entering a recession (sterling had been devalued from $2.80 to $2.40), television companies were being forced to shell out large sums of money kitting out studios and post-production facilities in order to be able to accommodate the introduction of UHF 625 lines and colour television, and the Association of Cinematographic and Television Technicians (ACTT) two-week strike was called right at the time of LWT’s launch.

Still, all of these events united the beleaguered LWT team – at least for the duration of the first weekend on air. “On Sunday, we were pitchforked right into the strike,” remembers Frost. “The studio scheduled for the live transmission of Frost On Sunday at 9.10 was nowhere near ready. What should we do? By lunchtime the decision had been made not to give in. We would move to the World Of Sport studio down the corridor and try to put together a management crew. Cyril Bennett became the producer … and Michael Peacock … the director”. Frank Muir was keen to lend a hand until someone advised him that as a member of Equity any such action would be seen as an infringement of ACTT duties. ACTT representatives watched the first edition of Frost On Sunday with interest. They were on the lookout for management collaborators.

Muir was keen to keep busy during the two-week strike and used the time to turn a rejected BBC idea into what became one of ITV’s longest running sitcoms – On The Buses. The BBC felt the premise was not glamorous enough, but Muir instantly recognised the value in Ronald Wolfe and Ronald Chesney’s show. Although never a critical hit, On The Buses became massively popular, running for 74 episodes from 1969 through to 1973, and spinning off into three feature films as well as two series of the follow up sitcom, Don’t Drink The Water.

Muir was also able to pick up another BBC reject, this time turned down because “one of the pupils was ‘educationally subnormal’ and (the BBC) thought it was wrong to make fun of afflictions”. Please, Sir! and later The Fenn Street Gang was, until Mind Your Language in 1978, LWT’s most successful sitcom. However, two swallows do not make a summer and what LWT desperately needed in those first few weeks was a bank of reliable and popular programmes.

What they got was poor ratings and financial disaster. The station’s high-minded attitude had won it few friends, and the press was quick to stick the boot in. That LWT was the local broadcaster for the Fleet Street newspapers, ensured reporters never needed to look far to find evidence of the decline of ITV, and so the press ran story after story on the downfall of London Weekend Television.

Not that the company did much to help itself during those early years. The behaviour of the channel’s creative staff often invited criticism. For example, early in the station’s life the ITA registered with LWT’s chairman, the Authority’s “rising exasperation with the quantity of dirt” in LWT programmes. This was prompted by what ITA considered “a thoroughly bad weekend,” during which the Saturday play had been “tasteless and witless” and there was “much deliberate dirt” in On the Buses. Frost On Sunday was deemed “too often smutty and suggestive” and “we were promised that the nude scene in Aquarius would include no frontal shots. The much abbreviated scene, however, did so” (in an act of defiance by the producer against an order from management”).

Although LWT received more than its share of criticism, it wasn’t the only ITV station to feel unfairly got at during the network’s tempestuous days of the late 1960s and early 1970s. Francis Essex, the production director of ATV would write a famous memo on the day in 1972 when a House of Commons Select Committee on Nationalised Industries published a highly critical report on Independent Television: “On the evening of Wednesday 27 September I made my rounds of the Elstree studio complex. In Studio B they were recording an episode of General Hospital, one of the new programmes for afternoon viewing. In Studio C there was an adult education programme teaching students music appreciation and how to play the piano. In Studio D there was the recording of a light entertainment programme starring Burt Bacharach, Anthony Newley and Sammy Davis Jnr.

“In Birmingham that day they had cleared from Studio 1 the previous recording of an episode an experimental drama series made in conjunction with the Writers Guild of Great Britain, with the purpose of encouraging writers new to television, and they were setting up for an episode of Crossroads. In Studio 2 they were recording a religious programme called Thy Kingdom Come for transmission in the Closed Period next Sunday. In Studio 3 they had recorded an information programme for women viewers, and transmitted a live news and current affairs programme for local viewers.

“In the film editing rooms there were four documentaries being completed for later showing and in the VTR post-production suite one team was working on an episode in the drama series The Strauss Family, while alongside them a second team was completing work on an episode of Inigo Pipkin, an education programme for pre-school children. I personally spent the day interviewing candidates for a programme director vacancy for our schools programmes department. I arrived at home just before 10 o’clock and, while I ate my dinner, I watched ITN’s News at Ten. I learned of the Select Committee’s report in the Commons, which scathingly castigated ITV and referred to the IBA as a sleeping watchdog.

“I could not help but wonder what the staff of ATV had done during the day that was so wicked.”