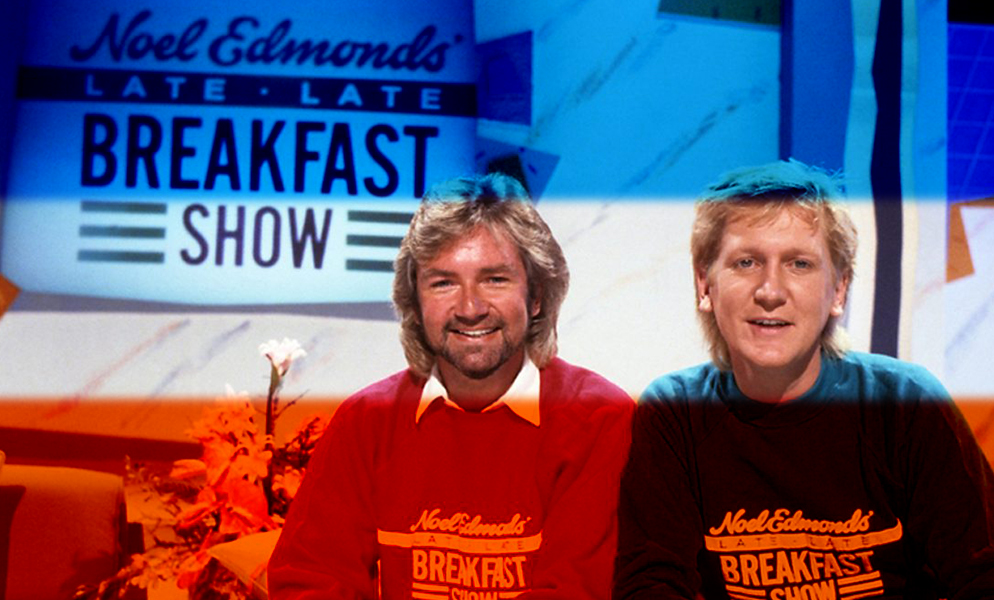 With the arrival of Casualty, Saturday evenings had taken on a surprisingly grim aspect, yet the real world could also violate the generally happy miasma of Saturday nights. In January 1986 came the death of Dustin Gee. Along with partner Les Dennis, Gee had positioned himself at the forefront of a new wave of mainstream comedy finding popularity on television. The duo’s The Laughter Show had attracted up to 15 million viewers during its second series and had brought them sufficient appeal to ensure their third series was billed Les and Dustin’s Laughter Show. However, just after the first episode of the third series had been broadcast, Gee – performing on stage in Cinderella in Southport with Les Dennis – suffered a heart attack. He died three days later. “Things looked very precarious for me,” admitted Dennis later in the year, “I’d lost not only a partner, but a very good friend. I went back on stage the next day and marvellous Jim Bowen stepped into Dustin’s role.

“I felt people might think I was being callous to go straight back. Then I thought of the cast and the audience which wanted to see a show and, although I was too stunned and shocked to decide myself, I’m glad I was made to go straight on. If I’d left it a few days, it would have been harder and harder”. Later that year Dennis presented ITV’s Summertime Special and appeared in The All Laughter Shows at Great Yarmouth. “I’m not looking for another partner,” he explained, “But Dustin’s legacy to me is that, because of our success as a double act, I’m now well known enough to be confident as a solo performer.”

Dennis found work too, back with his old friend Russ Abbot. Dennis and Gee had both been booked to guest star in Abbot’s first BBC series, and Dennis chose to honour the commitment. “Les worked with me long before teaming up with Dustin,” explained Abbot “and he’s a great performer in his own right. So I’m certainly not doing him any favours.” After a two-week break, the BBC recommenced the screening of the final series of Les and Dustin’s Laughter Show, and 18 months later Dennis returned with The Les Dennis Laughter Show. The series performed adequately, but peaking at 10.5 million viewers in 1987, the audience’s appetite for Dennis’ impressions was no longer as great as it once had been.

While Gee’s untimely death was shocking and distressing, nothing could have prepared the British public for what happened in November. After its somewhat shaky start The Late Late Breakfast Show had – for the last few years –established its Saturday night niche. “I think we’ve found the right balance,” commented Edmonds in October 1986. “We used to have satellite links with America, but we found that nobody wanted chats with famous people so we dumped all that. We cut down on the music because our research had shown that people weren’t interested in that either. Only in the case of somebody like Paul McCartney coming on would we ever show a video.”

The ratings had enjoyed a year-on-year rise. A programme in the 1983 series featuring Peter Davison, Sandra Dickinson, Mel Smith, Griff Rhys-Jones and Rod Stewart had attracted 12.1 million viewers, while an edition in 1984 featuring The Krankies, had drawn in 13 million viewers. The upward curve was further buoyed in 1984 by the arrival of Mike Smith as co-host. Almost immediately Edmonds adopted a kind of elder brother attitude to his new foil, teasing him in a manner not far removed from the kind of treatment he used to dish out to Keith Chegwin back in the days of The Multi-coloured Swap Shop. The audience loved it, and ratings continued to increase. The edition broadcast on 16 November 1985 featuring Eddie Kidd and Paul McCartney pulled in 14.4 million viewers, while in 1986, an appearance by Boy George made The Late Late Breakfast Show the third most watched programme of the week with 16.8 million viewers.

In 1985, a spin-off programme honouring outtakes and bloopers called The Golden Egg Awards was produced (in which Murray Walker earned the dubious honour of Fellowship of the Golden Egg for “lifelong devotion to the glorious cock-up”) and was re-staged the following year as Golden Egg Awards ’86. Although broadcast on Good Friday (when audiences are usually high) it managed to attract a still impressive 16.6 million viewers.

Mike Smith’s main function on The Late Late Breakfast Show was to present the weekly outside broadcast element. This was usually the acclaimed whirly wheel challenge, a recurring item in which members of the public were invited to partake in death-defying stunts. Perhaps partly inspired by the increasingly outrageous hidden camera items on Game For A Laugh, placing ordinary people right at the heart of the action seemed – at the time – to be a very Saturday night idea. “We have analysed our success carefully and, more than anything else, it is due to the involvement of the audience,” explained Edmonds. “It is the only show on TV where it is open to anybody to take part – all you need is a wacky idea, a bizarre photograph or video.” While any number of audience participation items came and went (including wacky challenges in which members of the public were invited to attempt to break the world record for the number of faces on a standard-sized passport photo, as well as an open invitation for viewers to phone in ideas for the following week’s programme), the whirly wheel challenge was the apogee of the show’s recurring items.

“You wouldn’t catch me doing half the things we get our Whirly Wheelers to have a go at,” Edmonds confided. The weekly challenges resulted in some minor casualties (most noticeably Barbara Sleeman who in 1983 suffered a broken shoulder as the result of a stunt in which she was fired from a cannon). However, the death of Michael Lush on 13 November 1986, while rehearsing a whirly wheel stunt called Hang ‘Em High, in which he was to fall from an exploding crate left all involved in a visible state of shock. At the judicial inquiry it was shown that the carabiner clip used to secure Lush to the bungee cord wasn’t strong enough to take his weight. In addition, there were concerns raised regarding the lack of safety contingency. “There’s a certain thing called ‘secondary safety’,” explains producer Michael Hurll. “In other words even if you’ve got a safety line on somebody, you should have an air mattress or something below.”

“I was in my office preparing to do another news interview about violence when the phone rang for the reporter,” recalls Will Wyatt (then head of documentaries and features at the BBC). “He put the phone down and said, ‘Sorry chum, this is cancelled. Bigger story. Someone’s been killed in a stunt for The Late Late Breakfast Show.’ He and his cameraman dashed off to cover the death.” The eventual inquest conclusion in January 1987 – that of death by misadventure confirmed that the BBC was at fault. For Edmonds the whole affair was not only a major personal tragedy, but a curtailment of his own career. Given his association (however tenuous) with the events that had led up to the accident, it looked like there was no way he could continue as the BBC’s “Mr Saturday Night”.

For others the professional toll was even greater. For the then director general of the BBC – Alasdair Milne, the Michael Lush affair, and in particular the commencement of the inquest, contributed strongly to the board of governors decision to sack him. It was a decision that some felt had been a long time coming, yet others proclaimed as an act that would “stand high in the annals of broadcasting infamy”.

Next Monday: It’s no good doing all the same old people all the time