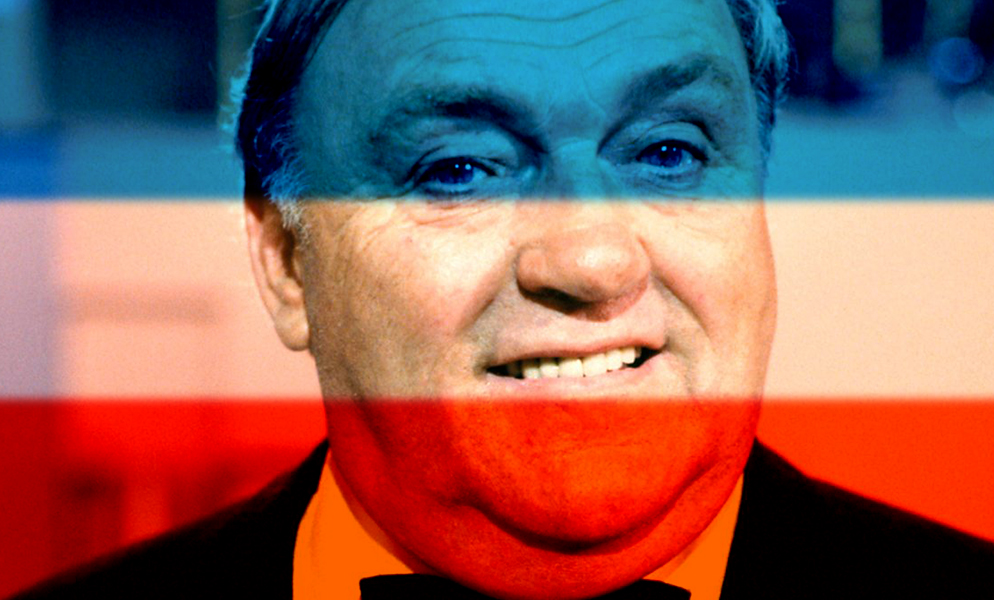 While the BBC was pulling up the drawbridge on traditional sketch show talent, the crop of comedians at ITV weren’t  having a particularly happy time either. With Cannon and Ball already virtually out of the door, the axe also fell on Bobby Davro. He’d had a series on peaktime Saturday night ITV, albeit under various titles, since 1985, but the run of Davro in the spring of 1991 was the last. Like Les Dennis he’d tried to cultivate a younger appeal by essaying impressions of the Pet Shop Boys, Paul Gascoigne, Sinead O’Connor and Alexei Sayle, but these failed to convince. Oddly, though, Davro managed to continue his career by signing a new contract with the BBC. This was, however, as a game show host, a career already being followed by Les Dennis on Family Fortunes. Meanwhile Russ Abbott went on to enjoy some success as a dramatic actor in the Granada drama September Song. Cannon and Ball enjoyed much less success in the nineties – clearly as they could only be seen as part of a double-act and as such they weren’t offered much, if any, new television work.

Some comedians attempted to reinvent themselves. The axing of Blankety Blank, Opportunity Knocks and The Les Dawson Show – all within a few months of each other – had left Dawson without any TV work. Hence he was assigned a brand new BBC1 game show, beginning in March 1991, called Fast Friends. The format involved two contestants on stage and a small audience of fifty people. The contestants would run around the audience trying to find someone who could answer Les’ questions, along the way building up a team of five people. Les seemed unsure about the programme’s format – “It’s not going to be easy. I think it’ll take a couple of weeks to get into it. If there is an air of spontaneity about it, it’ll be genuine – we’ll only have a couple of days’ rehearsal before we start shooting.” Not quite the words of a man certain of a hit, though he did say that “It should be really good fun”. He was also keen to distinguish his new vehicle from his best known show, emphasising “This is a family show, not a jokey quiz – any humour is going to come from the contestants … it’s a refreshing change to be able to give away something decent like a holiday.”

In the event, Fast Friends failed to make it to a second series and within a few weeks had been rescheduled to Friday weeks. The show was the wrong vehicle for a veteran comedian like Dawson, who couldn’t help but seem out of place amidst the young, energetic contestants running around the studio. The title sequence summed it up – a bunch of twentysomethings dancing to the uptempo theme tune, interspersed with brief shots of Dawson, in electric blue jacket, attempting to join in and looking about a hundred years old. Dawson had succeeded on Blankety Blank as it had been a rickety, creaking vehicle perfect for Les to send up. Here the show was too slick and soulless and really needed a younger, more fluent figure in charge. Fortunately, Les had fatherhood and serious acting to keep him busy for the next couple of years, before his untimely death in June 1993.

Perhaps it would have made more sense if Dawson had swapped roles with the host of the BBC’s next attempt at a Saturday night quiz. Andrew O’Connor had been in the fringes of primetime for a couple of years. He’d most famously been a participant on Copy Cats, the series that launched Bobby Davro to stardom, and he’d also hosted a number of children’s programmes. Now he was to get his own vehicle with the game show One To Win. On its launch, most critics drew attention to the way it appeared to be a retread of Bob’s Full House, only without much of Monkhouse’s charm. There were obvious similarities between the two, as they both revolved around bingo, and the only concession to modernity was a phone-in question for viewers to enter. O’Connor was constricted by the format, and he may well have been more at home on the more youthful and energetic Fast Friends, while Dawson could have added a wry twist to One To Win. As it stood, though, One To Winalso failed to make it to a second series.