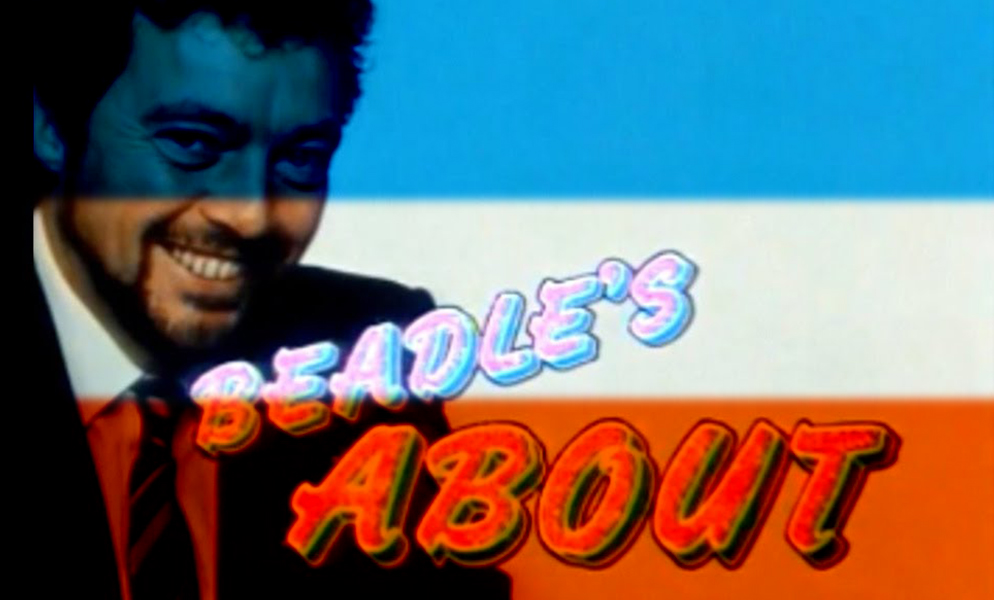 ITV in 1986 was not just about straight comedy series. Another force for light entertainment was burgeoning too. With Game For A Laugh drawing its dying breath, presenter and co-devisor Jeremy Beadle was considering his next move. In January, came his first new series, People Do The Funniest Things. Ostensibly a clip show, it featured an array of footage, including animals acting in amusing or endearing ways, outtakes and practical jokes. “Introducing the clips, I would play various tricks on the audience,” recalls Beadle. “Instead of just delivering a link, I would involve the audience in some kind of scam, such as blowing up air pipes, producing snakes, or collapsing sets.” Clearly there was an attempt to replicate some of the interaction that had proven so popular on Game For A Laugh, yet here it seemed out of place, leaving the television viewer wishing Beadle would dispense with the preamble and cut to the clips. The series was an instant and phenomenal success though, with the first edition securing an audience of 17.8 million, making it the 9thmost watched programme that year (and this was the year that EastEnders attracted a monumental 30.2 million viewers)

A second series followed in 1987 (this time peaking at a reduced, but still excellent, 13.7 million viewers) but there was trouble afoot. The inclusion of outtakes as part of the make-up of People Do The Funniest Things drew comparisons between Beadle and Denis Norden’s It’ll Be Alright on the Night. “His show was extremely popular, and also a worldwide seller” recalls Beadle, “and he objected to People Do The Funniest Things on the grounds that it was eating into material that he considered exclusively his. Although only about 20 per cent of our clips were outtakes, the powers that be listened to Denis and it was decided that our series would be dropped. I could see Denis’ argument, although I think he was being a little precious, I accepted the decision.”

This set-back was undoubtedly made more palatable for Beadle by the arrival later that year of his, and LWT’s, next hit series. “Originally we didn’t know what to call it,” says LWT’s Alan Boyd. “We had a lot of names, one of them was ‘Watch Out Beadle’s About’. I think I remember sitting at a table once in Montreux with a dozen of us round a table including the press saying, ‘come on, what’s the title gonna be for this new Beadle show?’  Someone suggested, ‘Gotcha’, but we said ‘no’ because of the famous headline in The Sun around the Falklands war, so the word had bad connotations.”

Beadle’s About remains the programme that Beadle is perhaps most closely associated with today. Almost universally derided later on it is life, the series was – from the start at the very least –   undeniably a slick operation (including on average four or five hidden camera stunts per episode). As Beadle himself noted, while hidden camera show series such as Candid Camera (to which Beadle’s About was often unfavourably compared) had “a shooting ratio of about 25 to 30 attempts in order to film one take for transmission, on Beadle’s About (given that stunts were performed on specific “victims” chosen by their loved-ones or friends) we had one go. It was all or nothing. The risk factor was incredibly high, and it’s a huge credit to my team that we achieved so many successes”.

“It became a much harder show to make because to be able get the scams delivered, you had to be devious and complicated,” says Boyd.  “I think after my time they became slightly crueller.  I’ve always wanted television to make me laugh and I felt that the programme twisted and I said to the producers, many a time, I said ‘I think you’re just running it too hard’”.

Achieving ratings of 14.8 million viewers for its first series alone, Beadle’s About provided its creator with a vehicle to keep him at the nerve centre of Saturday night television right into the next decade. For Beadle, like many others at LWT and TVS, 1986 had been a good year. With the BBC suffering at the hands of an unsympathetic government and a major dose of ill fortune, there was little doubt that the last 12 months had belonged to ITV. However, a diet of Conley, Davro, Beadle and Wilmot (not forgetting Cilla Black and Leslie Crowther) was – for many – the worst possible end result of a ratings conscious, profit-focussed commercial television network. What’s more there was little sign that things were going to improve. Yet for those who railed against such fare, 1987 would at least bring them one sizeable scalp.