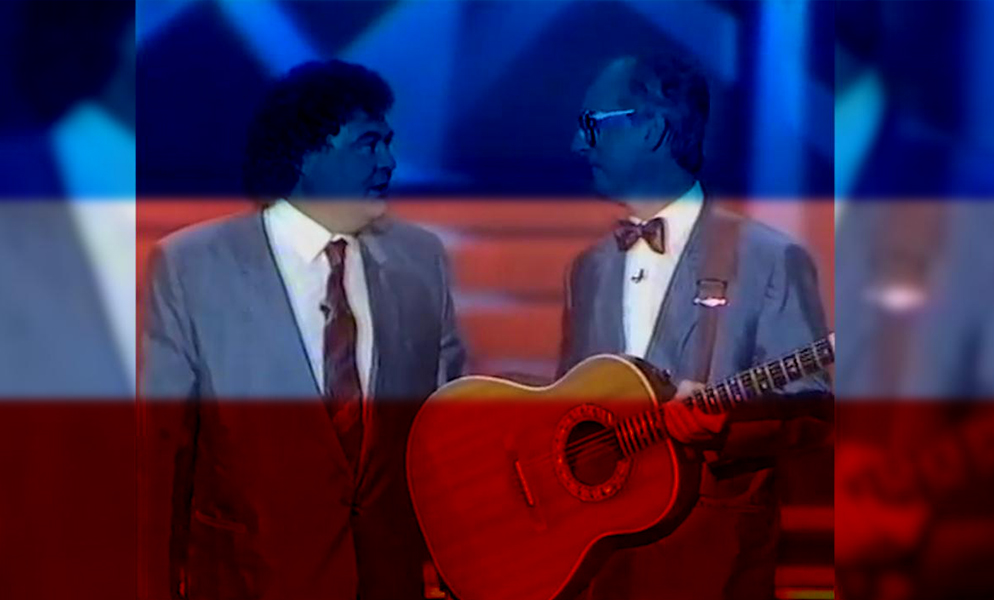 1991 remains a pivotal year in the history of Saturday night television. It was the last time various genres of television would find themselves a regular Saturday night slot, and many veteran entertainers made their final bows. It would also see the first flowering of a number of successful series that would go on to dominate the weekend schedules over the decade.

Comedy was one genre that seemed to disappear from the Saturday schedules in 1991. ‘Allo ‘Allo began its seventh series – and fourth on Saturday nights – in January, but this was to be the last in this slot. It could be argued that the show was probably past its peak – not least thanks to an ill-advised attempt to sell the programme to America in 1988 that saw one series expanded to a mind-boggling 26 episodes and so remain on air for six months. David Croft, the programme’s original producer and co-writer with Jeremy Lloyd, had also left, with Paul Adam now collaborating on the scripts with Lloyd. Two more series did follow in 1992, but on Sunday and Monday nights, respectively.

Sketch comedy was also in serious decline. Little and Large were clinging on to a BBC slot by the skin of their teeth, after the corporation publicly announced it was axing the series in 1990 – only to change its mind. Despite this rather undignified pondering over Syd and Eddie’s future, the new series was still broadcast in their familiar Saturday evening slot come March 1991. There was, however, a rather obvious budget cut and the programme was cut from 35 to 30 minutes. It was not a success and when the run finished in April, the BBC decided to pull the show for good. Oddly, after this was announced, the BBC still ran repeats of their 1990 series on Friday evenings during the summer months – and given each episode featured a musical act performing their current single, it made the whole thing look incongruous. Come the end of August, though, the duo had made their final appearance in their own show on the BBC after an incredible 13 years on peak time Saturday nights.

The comedy sketch show had been a staple of BBC1’s Saturday night schedules for some two decades and there was still considered to be some mileage in the format. In 1991 a brand new series was commissioned. Well, almost. Though You Gotta Be Jokin’ was announced as a new show, it was virtually a continuation of Something For The Weekend, launched in June 1989, with sketches from a team including Susie Blake, Mike Hayley, future C4 Head of Comedy Caroline Leddy and Opportunity Knocks winner Mike Doyle. The show failed to catch on, but was brought back in 1990 as Up To Something– now on a Monday night and with a changed cast, with only Mike Hayley surviving and joined this time by Shane Richie, Frances Dodge and, most notably, future Day Today participant David Schneider. Further eye-opening names in the credits, included Richard Herring and Armando Iannucci, who both contributed scripts a year before On The Hour.

You Gotta Be Jokin’ was yet another attempt to find a permanent sketch team, this time with the show back on Saturday nights. Again, there were wholesale cast changes, with only Shane Richie surviving from the previous incarnation, alongside George Marshall, Billy Pearce, Maddi Cryer (no stranger to this slot, having appeared regularly on Little and Large’s final series) and Annette Law. The BBC rather overdid the hype in their publicity for the show, announcing it starred “five young performers, appearing on television for the first time” – not quite true. It also said the show would feature “fast standup comedy, with a generous helping of characters, a large portion of impressions and a double order of talent”. Each programme began with the team sliding down a fireman’s pole  and delivering a one-liner or impression – a sequence forever imprinted in the minds of those who saw it. There were also solo spots, with Richie essaying characters such as the Westcountry metal fan Snakebite, and Marshall showing off his skills as an impressionist, notably in recurring sketches detailing the latest releases from Beeb Records.

However You Gotta Be Jokin’ couldn’t help but look out of place at a time when alternative comedy was fast becoming the mainstream, and after one series under this name the entire venture was scrapped, and the cast went their separate ways. Of the quintet only Shane Richie went on to future success, although Billy Pearce continued to find work on stage and in the clubs. Seven days after the series ended came the start of another run of The Les Dennis Laughter Show. Les had tried hard to move his act forward, including impressions of Arnold Schwarzenegger, Phillip Schofield and – a brave choice for Saturday night – Terry Christian in his portfolio. The following month, Dennis’ sidekick Lisa Maxwell also landed her own, very similar sketch show, this time on Thursday nights. Yet neither programme made it to another series and, come the autumn, Les’ mentor Russ Abbott also found his career hitting the rocks. Times had changed since the BBC lured him from LWT in 1986, and in September 1991 his final series was broadcast not on Saturday, but Friday evenings. The BBC failed to renew his contract, claiming his style of humour was no longer relevant for a modern audience. Come 1992, there was no comedy sketch show in the Beeb’s Saturday schedules for the first time in well over a decade.

Next Monday: If there is an air of spontaneity about it, it’ll be genuine