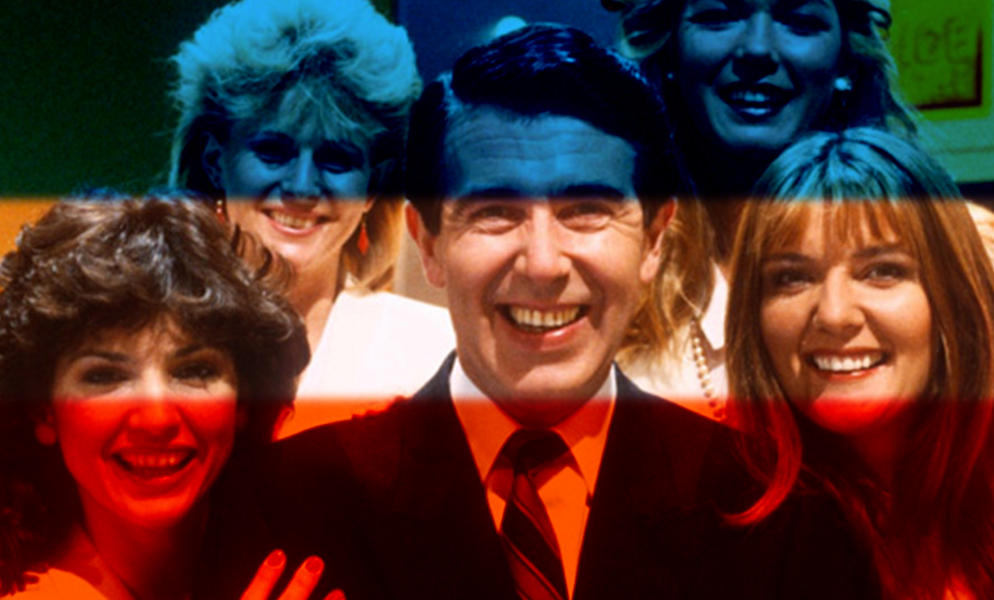 Even before the arrival of Surprise, Surprise, Birt’s public confidence in LWT’s output appeared well founded. By the end of 1983 the station had finally been able to assert a consistent ratings lead over the BBC. “LWT’s huffing and puffing in the past over poor ratings performance at the weekend seems to have had an effect,” reported the television industry newspaper Broadcast in December that year. “For the week ending November 13, 11 out of the top 20 programmes went to weekend programmes … Friday night scored particularly well for ITV with … Family Fortunes persuading some 13.6 million people to turn on. Family Fortuneshelped keep a 14 million strong audience for The A-Team which in turn kept 13.3 million people viewing for LWT’s A Fine Romance, with 10.8 million glued to Central’s drama series Auf Wiedersehen, Pet.

“LWT performed well on Saturday night, too, with Russ Abbot’s Madhouse and Punchlines attracting a 12 million audience and keeping it there for Hart to Hart and The Intruder Within.” Game For A Laugh, too was drawing in just under 12 million viewers. However, there was some good news for the BBC. Blankety Blank was only just off the pace with 11 million viewers, and The Late Late BreakfastShow was at last beginning to find its feet with 10.3 million people tuning in. Furthermore, LWT’s drama output was languishing, and in 1983 the station was criticised for its reliance on re-runs of drama series in peak-time slots, such as The Professionals. “ITV in general pulled back on its programme-making shortly after I came into this job,” explained Birt. “The industry has been through a bad few years as a result of the impact of ITV finances and the IPA Equity dispute and the difficulties we have had with Channel 4 revenue … ITV is slowly starting again to expand its peak-time programming at its traditional rate. Now as we start to make we will transmit”.

LWT remained vocal in its criticism of the failure of other ITV companies to support the weekend schedule. The station remained convinced that the other network franchises were unwilling to invest in programmes that they felt would never attract a sizeable audience against a strong BBC line up. However, by the end of 1983, things were beginning to change. Central Television in particular, was contributing more and more to a successful weekend line up, and in March 1984 would come up with a game show, that while failing to revolutionise the genre in the way LWT’s Game For A Laugh had some three years earlier, provided ITV with a format that would not only endure, but consistently attract large audiences.

In February 1984, it was revealed that Russ Abbot was deep in talks with LWT after the comedian (soon to leave ITV for good in favour of the BBC) had considered calling time on his Madhouse series. Apparently, a proposition had been made by Central to have Abbot host a new primetime game show. The Price Is Right had for some years been a success on American daytime television. It was one of a number of game show formats touted by Anthony Gruner, head of Talbot Television. “After man has found food, shelter and a mate, then he or she wants to play,” offered Gruner by way of an explanation as to the enduring popularity of game shows. “It’s a basic human trait”.

The Price Is Right had been looked at by British programme makers before, including – according to producer William G Stewart – the BBC, but no one had yet been willing to take it on for fear that its raucous studio atmosphere wouldn’t survive the trip across the Atlantic. The format of The Price Is Right appealed to Central Television, albeit some revisions were considered necessary, such as having the show’s iconic catchphrase “Come on Down!” come from the mouth of the host, instead of a disembodied voice (which was what happened on the US version).

Next the hunt was on to track down a suitable presenter. “I think the first choice was Michael Crawford,” remembers Stewart. “I went to see him, he was quite keen on the idea … but it dawned on me that he was going to turn this into Barnum.”. Russ Abbot seemed a logical choice – popular with all ages and blessed with an ability to interact well with members of the public.

“The way we thought of doing it was using Bella Emberg as my hostess,” remembers Abbot. “and we submitted what we thought at the time were some very good ideas which would have given a different slant to the show. But I think the American part of the production said, ‘oh this is The Price is Right. It’s worked this way forever and it’ll stay that way.’ So I said ‘I’m sorry I don’t want to do it that way. If you want Russ Abbot to do it, then you have to accept me and my ideas and my input.’”

Central had to look elsewhere for a front man. Next on Stewart’s list was Matthew Kelly,who passed on the offer. After careful consideration the field was limited to three: Mike Reid, Joe Brown and comedian and ex-Crackerjack presenter Leslie Crowther. Stewart’s preferred host was Leslie Crowther, while ITV favoured Joe Brown.

“In the end we were a bit of a stalemate,” remembers Stewart. “So I made a suggestion to [ITV]. I said, ‘Look I tell you what we’ll do.  We’ll make two pilots, I’ll make one with Leslie and someone else can make one with Joe and you can then be the people to decide whether I’m right or wrong.’  In the end they asked me to do both pilots. Which I did and I had to say, I really enjoyed working with Joe Brown he was such fun.” In the end ITV went for Crowther.

Next Monday: Let’s get straight into this