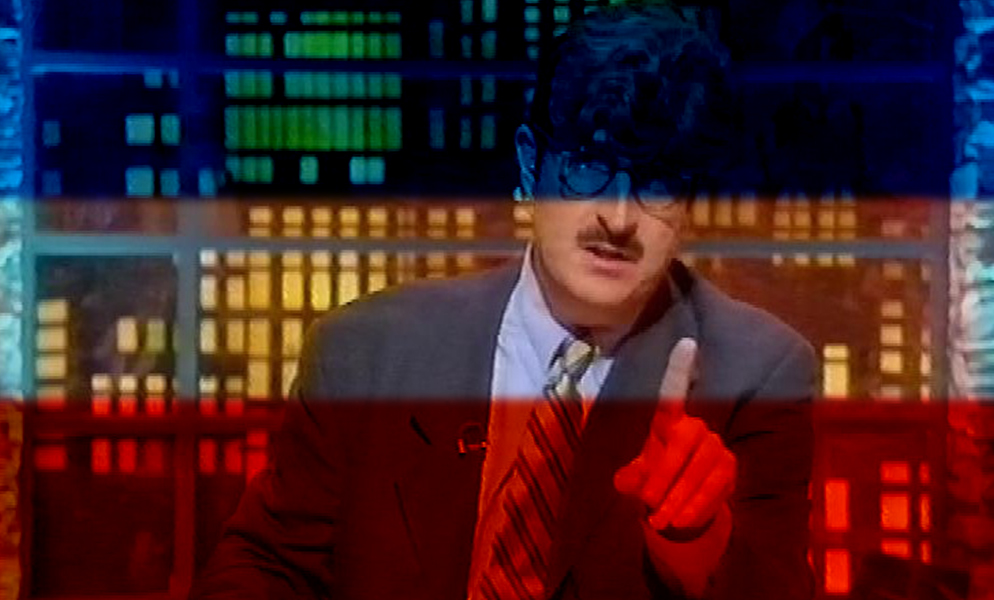 The boost the lottery had given the BBC was felt throughout the Saturday night schedule. When Noel’s House Party and Casualty ended their runs at the end of March 1995, thought was given to replacing them with similar programmes in the retaining that new larger audience. This meant a more logical schedule – 7pm was now always home to a big light entertainment show, and 8pm to a range of family dramas, with the lottery sandwiched in between – all year round. To emphasise this, the cover of 1 April 1995 edition of Radio Times announced “Welcome to the new Saturday night,” trailing all the new offerings together as one cohesive whole, running throughout the evening.

The 7pm slot from April was filled with Confessions, a new entertainment series spun-off from a successful segment in Simon Mayo’s Radio 1 show. It was also one of the first pre-watershed commissions for Hat Trick Productions, at that time better known for their late night comedy such as Have I Got News For You. Each week, Mayo welcomed members of the public to the studio, often set up by their friends, who would be given clues a misdemeanour from their past. Amiable enough as a House Party replacement, Confessions nevertheless attracted some mild controversy, as the first series offered a holiday to the participant considered by the audience to be the top confessor of the week – leading to complaints that the BBC was rewarding bad behaviour. This element was dropped for subsequent series.

When the run of Confessions ended in June, BBC1 seamlessly segued into another entertainment series in the same slot, Steve Wright’s People Show. This vehicle for the former Radio 1 DJ had first appeared the previous autumn on Saturday teatime and performed well enough for a second run to be commissioned to keep things ticking over until Noel returned from his holidays. However, it did rather scream “summer filler” at you, with little distinctive content and Wright appearing ill-at-ease in front of the camera. It was as if nobody really worked out what the programme was supposed to be. Not even the presenter seemed to know, suggesting “It’s not a chat show, but there’ll be people on it, chatting. And it’s not a consumer show, a music show, or a comedy show. It’s all of them.” Wright apparently couldn’t even decide on the programme’s name.

What we eventually got involved Steve sitting at a desk in a rather extravagant studio set, including umpteen staircases and water features. In the first series, he was joined by some co-presenters who sat on a sofa alongside him, clearly an attempt to recreate his Radio 1 ‘posse’. BBC Head of Light Entertainment Michael Leggo pointed out, “The radio show has a distinctive voice, and if we can translate that humorous nerve he touches onto the screen, we have a winner”. Clearly they didn’t, as come the second series they’d gone and Wright’s studio foils were comedy characters, including a hapless floor manager, whose conversations resembled Noel’s battles with his neighbours on House Party. The rest of the show saw Wright interview various medium-sized celebs, such as Michelle Collins and John McCririck, and set up some in-studio stunts; although the most extravagant, a live wedding at TV Centre, was slightly stymied when the following day’s papers claimed the bride’s surprise was mostly thanks to the fact they’d already got married a couple of weeks before. The only other moment of interest came when, as part of one item an audience member was challenged to retrieve a wad of money hidden somewhere in TV Centre, a middle-aged woman had to run up seven flights of stairs, with obvious results. The second series turned out to be the final run, and nobody seemed to notice.

The other fixture in BBC1’s new Saturday night was the post-lottery drama. Bravely, when Casualty finished, it wasn’t replaced by a similar precinct drama along the lines of The Vet, but instead something not seen on peak time TV for many years – a fantasy drama. Bugs was created by Brian Clemens, which convinced Radio Times to bill the series as “The Avengers for the nineties” – something Clemens did little to dispel, suggesting “Bugs is the driving technology, that hard realistic edge of The Professionals, allied to Avengers-ish dramatic premises. Maybe it’s where The Avengers would have ended up”. While the Saturday night slot may have seemed unusual, Clemens suggested “Bugs is family viewing in a way that The Bill isn’t. Older people don’t want to see that – they can just look out of their back window. Bugs is something you can’t see unless you turn on your television”. Basically, Bugs was an entertaining slice of hokum and at the start, at least, it was a big hit, keeping hold of much of Casualty’s audience.

While this revolution was ongoing at Television Centre, ITV seemed rather muddled. When Blind Date ended its run in March 1995, a distinctly B-list line-up of shows were rolled out in its place, including Michael Aspel’s 999-esque Caught On Camera,  You Bet!, and repeats of Baywatch – extravagantly billed as Golden Baywatch. There was also a familiar Saturday staple, Beadle’s About, back for a ninth series. Jeremy was at pains to point out that the show was not averse to change, and that this series was unlike any other – “We’d gone as far as we could with confrontation. The public loved to see it, and if you’re sitting on gold, why play with it? But I love the challenge of change, even though it’s dangerous. We were becoming predictable wind-up merchants rather than hoaxers, so we’ve gone into the absurd and have some very clever items”. Yet the public seemed unconvinced, as viewing figures were well below the show’s peak. The rest of the summer was fairly ragged on the third channel, though there was one notable moment when a repeat of Gladiators beat the first of a new series of Pets Win Prizes under new host Dale Winton.

Winton was also one of the major players in one of the major telly talking points that summer. Not for the first time, Bruce Forsyth had defected to ITV, leaving an opening at the helm of the Generation Game. Whoever landed this prestigious gig would be responsible for keeping the Beeb’s run of form going.

Next Monday:73. Congratulations, you have got the fucking Gen Game