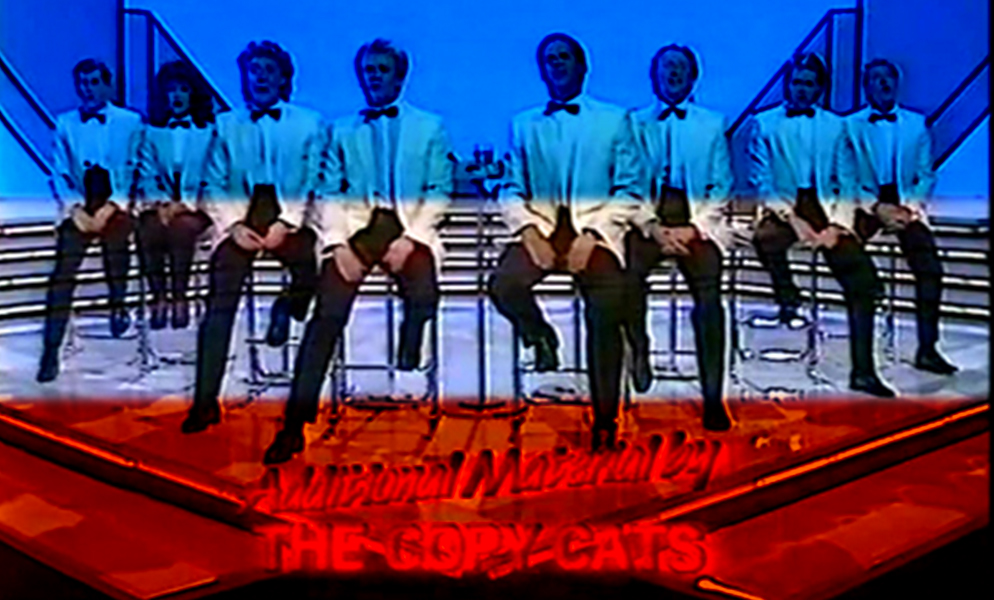 While LWT was busy furnishing British entertainment with new, alternative comedians, the station’s dedication towards mainstream acts remained undimmed, and as if to counterbalance the pioneering spirit and anarchy of Saturday Live, in 1985LWT also produced Copy Cats. Entirely typical of primetime British comedy to that point, Copy Cats was a re-working of LWT’s own hit 1970s series Who Do You Do? and 1984’s Go For It (comedian Aiden J Harvey appeared in all three). Fast-paced, straightforward and populated with often highly exaggerated caricatures of real people, there was also a touch of Russ Abbot’s Madhouse about Copy Cats.

Like Saturday Live, Copy Cats looked as if it was to be the making of those who appeared on it. Scottish comedian Allan Stewart, while attaining widespread popularity in his homeland, had never quite managed to breakthrough to the rest of Britain. An appearance on a 1972 edition of Sunday Night At The London Palladium and series like 1979’s The Allan Stewart Tapes had brought him briefly to the attentions of the public at large and a nascent music career had provided him with a minor hit record (“The Opening Night”), but he failed to make a significant impact. Consequently, he had high hopes for his regular appearances on Copy Cats. “People have said to me that I have had more pilots than British Airways, which is a bit cruel, but it is also quite true,” remarked Stewart somewhat ruefully in 1985. “I still haven’t quite made the breakthrough to being a household name … I’ve done every kind of television under the sun – all the guest spots – but it is amazing how much television you have to do to become very well-known … I was really bubbling under between 1971 and 1975, then things levelled off – but I have made myself an incredible living. Now I would like to become as well-known outside of Scotland as I am here”. Stewart went on from Copy Cats to appear in series such as Laugh Attack and Patter Merchants.

Others too would find that Copy Cats would fail to propel them to the next level of celebrity status. Comedian Aiden J Harvey had won New Faces in 1974 and appeared on a number of ensemble comedy shows including ATV’s 1975 The Summer Show (which featured a number of New Faceswinners), the BBC’s The Main Attraction (1984) and Thames Television’s 1985 series The Funny Side. His career after Copy Cats attained a similar trajectory and Harvey continued to work the clubs of northern England and appear at corporate functions.

Still, Copy Cats did act as good grounding for some entertainers. “I call myself an impressionist rather than an impersonator,” explained Gary Wilmot to readers of TV Times in 1985. “I try to create an illusion – like an artist”. Another New Faces winner, for Wilmot, Copy Cats was a step along a road that would lead him to success and acclaim in musicals such as Me and My Girl and Carmen Jones. Jessica Martin too would go on to achieve success on the stage after Copy Cats, as well as make regular appearances on TVS’ 1986 series Bobby Davro On The Box. Of course Davro himself achieved star billing on the first series of Copy Catsby virtue of his previous appearances on Go For It and The Krankies Klub and of all the entertainers who appeared over the course of Copy Cats’ three series, Davro has been the most prolific in terms of subsequent television appearances: making a number of series for TVS including Bobby Davro’s TV Annual in 1986, Bobby Davro’s TV Weekly in 1987 and Davro’s Sketch Pad in 1989, before switching to the BBC in the early 1990s to find some success in 1993 with Bobby Davro: Rock With Laughter.

Copy Cats did well for LWT with its second programme achieving 12.9 million viewers. A second series followed in 1986, adding Andrew O’Connor to the mix. Again ratings were good peaking at 12.7 million viewers. The series inevitably evolved over time, but viewed today even the later episodes look archaic. The original title sequence and theme tune underscore the programme’s central premise in an unsubtle way (the theme tune features electronic meow sounds just to ensure the point has been driven home). Many of the sketches feature impressions, not of other celebrities, but of fictional comedy characters (such as Rik Mayall’s Kevin Turvey and Russ Abbot’s Jimmy McJimmy), which irked some commentators. “Of course, I’m actually doing an impression of someone doing an impression,” remarked Allan Stewart. “It isn’t more difficult – just a little bit weird”. Weird was one way to describe it, but others felt it was plagiarism.

Perhaps Copy Cats is best remembered today for is closing titles. Here the performers would group together on bar stools and sing a song, pausing now and then for a quick gag or impression. Somehow this sequence managed to evoke everything about old school entertainment that Saturday Live was in the process of systematically dismantling. However, Copy Cats’ third and final series in 1987 retained a sizeable audience (albeit peaking this time at only 11.6 million viewers), suggesting that non-threatening, mainstream comedy still had its place. As the massively popular Russ Abbot’s Madhouse drew to a close after five hugely successful years (the final run attracted 12.6 million viewers), Copy Catsserved an important role, bringing to the fore a number of new mainstream entertainers who would crop up again and again on Saturday nights. Copy Cats also established a breezy, fast moving template for sketch show comedy that would be exploited by ITV throughout the rest of the decade.

So, as we passed the mid-point of the 1980s, it was evident that – while new ideas and new notions of what could be deemed as acceptable Saturday night television were forming all the time – traditional entertainers still held sway. As 1985 turned into 1986, Michael Barrymore, Les Dennis, Bobby Davro, Cilla Black, Noel Edmonds, Russ Abbot and Jeremy Beadle looked unlikely to be deposed anytime soon by Ben Elton or any of the other members of the alternative comedy scene.

Next Monday: There’s going to come a time when you’ll have to go to the BBC