It’s Saturday Night was originally published, in a different form, on the website www.offthetelly.co.uk in monthly instalments under the name The Glory Game. The first part went online in October 2001 and the story of how Saturday night telly evolved from 1980 to 2005 was wrapped up four years later. A book, based in part upon the research was published in 2007. It’s called, The Encyclopaedia of Classic Saturday Night Telly.

This regular new series on TV Cream is a revised version of the original articles, with references updated, errors – where spotted – corrected, new information added and text rewritten. ISN will be updated every Monday. So follow along with us as we, once again, tell the story of TV’s best night of the week.

The construction of a transmission schedule of programmes that succeeds creatively, critically, commercially and with big audiences is a formidable, but worthwhile objective. Sometimes it has been achieved. Sometimes, inevitably, it has not. The means are elusive, impossible to legislate, but recognisable at once.

If you love television, and in particular British television, then you will hold strong opinions about that section of the broadcasting output labelled “Saturday night telly”. For you, those three words will evoke a string of mental images and a sense of nostalgia. You will remember when you used to look forward to that evening’s edition of Doctor Who, or Roland Rat: The Series, Saturday Live, or perhaps You Bet!. You will also be thinking of how stupid, or just plain old-fashioned Saturday night telly can be and it’s likely you hold the opinion that it just isn’t as good as it used to be. This, undeniably, is the lot of Saturday night television, it polarises opinion in a single person. As long ago as 1970, the IBA had cause to describe it as both “tasteless and witless”.

Culturally Saturday night’s the time in the week when we are allowed to unwind and cut loose. In short, it’s going out night. Those who are left behind feel excluded and dull. As such, Saturday evening television provides a unique service. For the other six days we are a nation united in our pursuit of telly watching, yet on Saturday evening, television is for those stuck at home. It attempts to provide us with the spectacles we would experience if we were to join our friends or workmates on the town: familiar faces all dressed up, banter, romance and – most importantly – something to convince us that tonight, anything might be possible.

In autumn 2001, ITV decided to position a football highlights show right in the middle of Saturday peak time. Unsurprisingly, it provoked comments of outrage from those who viewed it as an attack at the heart of British television. This kind of thing is not welcome here. Documentaries, serious drama – even sitcoms – rarely play well on a Saturday evening and neither did sport. The Premiership, helmed by Des Lynam, soon retreated into the bunker of a late night slot.

There is something about our expectation of Saturday night telly that seems to draw us to game shows or big budget light entertainment and to diminish our appetite for the type of programmes we tune into during the week. How did this come to be? 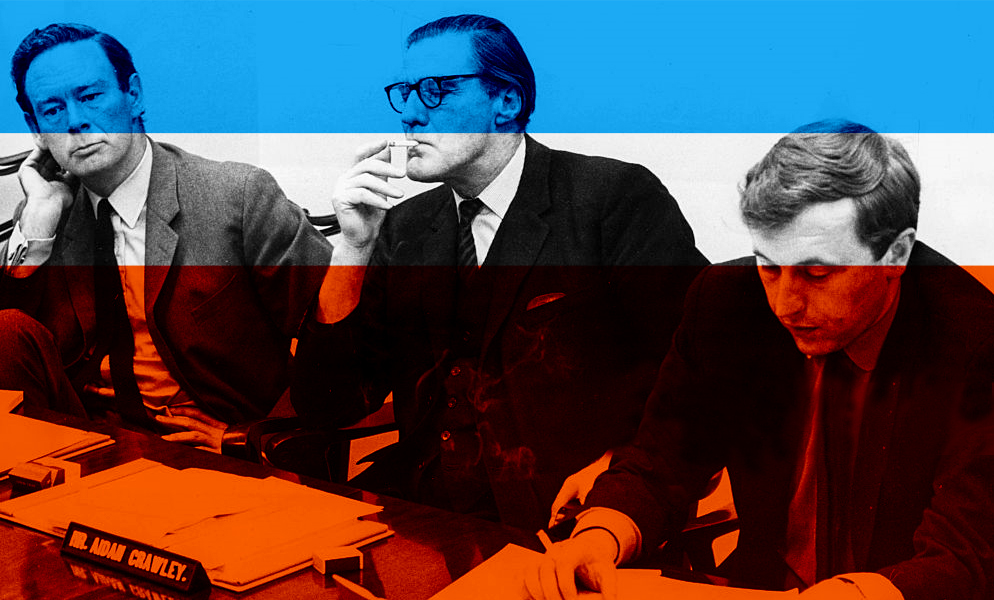 Kardomah Cafés were a chain of coffee shops, which first became popular in the 1900s. They were still in business in the 1960s and were renowned for providing in-store live entertainment in the form of string quartets. However, their outpost nearby Rediffusion’s head office in Kingsway, London was prized for its solitude. It is January 1967 and David Frost is huddled in conspiratorial conversation over a cup of coffee. By the time he reached 28, this son of a Methodist preacher, had gained a formidable reputation for his ambition and audacity. His career in British television knew no equal. He had first come to the public’s attention in 1962 with That Was The Week That Was, an influential satire that had radically reset the course of British television comedy. He next moved onto fronting his own thrice-weekly show, The Frost Programme, which broke the mould of popular television journalism. By 1967, he had become an iconoclastic, yet central, figure in British television.

The man facing him in the Kingsway Kardomah coffee shop is a close friend and fellow television professional. Clive Irving was a serious-minded journalist, but like Frost, was professionally restless and immediately receptive to the plan his friend was now laying out to him.

Some days earlier, Frost had been at a party of the television company, Rediffusion. Mixing with programme makers and other staff members, he noted how unadventurous their conversation seemed to be, and – in turn – how that probably accounted for dated the company’s output had become. For some time Frost had been playing with the idea of setting up and running his own television company. In June 1967 the regional franchise awards for ITV were up for grabs.

With the creation of Independent Television on 22 September 1955, opportunities for resourceful young TV men had exploded. Unlike the BBC, ITV was made up of a number of regional franchises awarded by the Independent Television Authority (ITA). Embedded into the structure of the channel was the principle of awarding and periodically renewing contracts for all of the regional franchises. Originally just six were created.

By the time of the first renewal, franchises existed in each major region of the United Kingdom (sometimes more than one). The contracts awarded in 1964 were to be in place for just three years. This was due to plans announced by the ITA’s Lord Hill of Luton for ITV to seek a second channel. As such the incumbent contractors held on to their franchises. By 1967, and with no second channel forthcoming, there was a strong feeling that this time the Authority would look to introduce new blood into the ITV system. The franchise for the Yorkshire region was the one considered most winnable by many seeking to enter television for the first time, and up until the Rediffusion staff party, Yorkshire had been Frost’s target. Now though, he shifted away from the north onto the region that Rediffusion was serving. Frost’s aim was to begin his career as a television company owner by capturing the coveted and lucrative London franchise.

Rediffusion, although arguably in the creative doldrums by the late 1960s, had at one time held a pivotal position within Independent Television. Had it not been for the tenacity of Associated-Rediffusion’s chairman, John Spencer Wills, then the fledging channel might have suffered an early demise. Rediffusion shored up the network by being the first company to produce programmes for schools, and pioneering the use of videotape. Yet now Rediffusion seemed ripe for the picking. Frost’s confidant, Clive Irving readily agreed this would be the best target, and the duo started to hatch their plans accordingly. Yet, both men were canny enough to devise a fallback: if they were unsuccessful in stealing Rediffusion’s London weekday franchise, they could always bid for the weekend contract instead.

Frost and Irving’s London Television Consortium was able to attract an array of highly respected individuals, both inside and outside the television industry and even some from the ranks of Rediffusion itself. Of particular note was the recruitment of Michael Peacock, controller of BBC1, and probable future director general.  Securing Peacock represented a significant achievement and ensured the ITA would take Frost and his friends seriously. That the consortium could also boast senior members of Rediffusion, as well as a prominent and popular broadcaster, effectively meant there was something for everyone. Peacock was the gravitas, Frost brought the popular touch, while Cyril Bennett and Guy Paine, Rediffusion’s director of programmes and director of sales, respectively, demonstrated there was a proven track record too. The consortium’s activity at the time was feverish, but their ability to sell what was little more than a dream to TV professionals already happy in secure jobs was a sight to behold. The company’s first head of entertainment, Frank Muir remembers “it was not exactly joining, there was nothing to join, it was more like being given a ticket in a lottery where the prize was a job yet to come into existence”.

As a suitor, LTC looked irresistible, however, its credibility also proved to be a problem. Bennett and Paine were closely involved in Rediffusion’s own bid to retain its franchise, and the moral complexities would surely prove distasteful to the ITA, who would shudder at the thought of sitting through Rediffusion’s presentation complete with the duplicitous Bennett and Paine. So, the decision was taken (somewhat reluctantly) by Frost and his colleagues to focus, not on the five-day contract as originally planned, but instead the “fallback” – the weekend franchise.

A meticulously worked out proposal document complemented the dream team, and so it came as little surprise when, on 12 June 1967, the London Television Consortium learned it had been awarded the contract. The Authority commented the consortium represented “perhaps the greatest concentration of talent in one company ever seen in British television”. Yet almost immediately it would become apparent that such a gifted group was far better suited to a five-day contract, and perhaps not to ITV at all. London Weekend Television (as it was christened) intended to be high minded. “Independent Television,” said their proposal “has the capacity to be as complete a public service as the BBC”.

While the ITA’s deputy chairman, Sir Sydney Caine was to reflect two years later that the decision to award the contract to the LTA was categorically wrong, Lord Hill, the chairman at the time of the award commented that LWT “had to have its chance whatever the repercussions”. “It’s an understatement,” he continued in writing the award of contract “to say that the Authority liked this application … here was a group which would bring new thinking, fresh ideas and lively impetus to weekend broadcasting.” Soon to be nicknamed “BBC3” by the broadsheets, LWT was to find out very quickly that an ethos of improved “quality of mass entertainment” would not be sustainable within a commercial industry about to embark upon its worst financial setback in 13 years.

It’s fair to say that as LWT unwittingly headed towards a raft of early troubles, the BBC wasn’t predisposed to lend a hand. Many of its top executives and producers had left to join Frost’s merry band and so there was a score to settle. In fact, the BBC was ready and eager to exploit the institutional weakness of allowing one company to shoulder almost all of the responsibility for producing ITV’s weekend output.

Next: “An autograph before you go”